Lt. General Muhammad Safdar (Urdu : محمد صفدر‬‎) is the former Governor of Punjab, the largest province of Pakistan, having served from 1999 to 2001. He has previously also served as the ambassador to Morocco and the Vice Chancellor of the University of the Punjab till 1993.

Muhammad Safdar belongs to Chakwal, Pakistan and is a graduate of Military College Jhelum. Later he joined Pakistan Army. During his military career, Safdar commanded an infantry brigade and the 7th Infantry Division, Peshawar, served as commandant of the Command and Staff College, Quetta from 1982 to 1985 and then reached his professional peak as Chief of General Staff (CGS) in the GHQ having served there from 1986 to 1988. His last military appointment was commandant of the National Defence College from 1988 to 1989. Safdar retired from active service in July 1989. 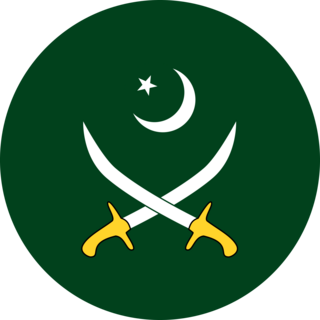 The Pakistan Army is the principal land warfare uniformed service branch of the Pakistan Armed Forces. It came into its modern existence from the British Indian Army that ceased to exist following the partition of British India that resulted in the parliamentary act that established the independence of Pakistan from the United Kingdom on 14 August 1947. According to the estimation provided by the International Institute for Strategic Studies (IISS) in 2017, the Pakistan Army has approximately 550,000 active duty personnel, supported by the Army Reserve and the Army National Guard. In Pakistan, the age of military enlistment is 17–23 years of age for voluntary military service; soldiers cannot be deployed for combat until age 18 according to its nation's constitution.

The 7th Infantry Division, also known as the Golden Arrow and Peshawar Division, is the Pakistan Army's oldest and most battle-hardened division. The officers and men of the Golden Arrow Division have fought in all of Pakistan's Wars and have an unmatched combat service record.

Safdar was the Pakistani Ambassador to Morocco, vice-chancellor of the Punjab University and then Governor of Punjab. The general stayed as the governor of Punjab till 29 October 2001 until he was replaced by Lahore corps commander Lt Gen Khalid Maqbool.

The IV Corps is a corps of Pakistan Army. Having established in 1965 after the Indo-Pakistani September War, it is currently stationed in Lahore, Punjab Province of Pakistan. The current corps commander is Lieutenant General Majid Ehsan.

Brigadier (r) Shaukat Qadir, a political and defence analyst, had this to say about command attributes of Safdar, "In the course of my career I came across very few inspiring senior officers; most noteworthy among them was General Safdar, who later became VC Punjab University and, very briefly, Governor Punjab, and whose extraordinary dynamism in peace inspired one to believe that he would be a success in war." [1]

Shaukat Qadir is an independent Risk and Security Analyst who works generally in South Asia, particularly in Pakistan and Afghanistan. He started his career as a pilot in the Pakistan Air Force (PAF) and then moved to the Pakistan Army. He retired in 1998 as a Brigadier. In 1999, he became the founder and vice-president, and later president, of the semi-independent think tank Islamabad Policy Research Institute (IPRI). In 2001, he sought early retirement due to disagreements with the military government. Since then, he has been visiting faculty at the Fatima Jinnah Women University, writing in various national and international newspapers and journals, and working as an independent Security and Risk Assessment consultant. He is also currently a Senior Analyst at Wikistrat.

Brigadier (r) Raja Azizur Rehman, a close friend and colleague of the governor, said this about the new governor when he was appointed in 1999, "he is consistent, professionally very sound, cool and calm. Has immense capacity for work and excels in shifting the essentials. He is soft-spoken and likes to listen, He carries a very happy team. He is very clear about his objectives and leaves no stone unturned to achieve that." The general is reputed to be well versed in the art of getting things done. 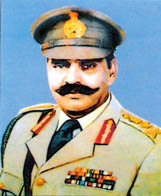 Lieutenant General (retd) Khalid Maqbool Vohra,, is a career Pakistan Army officer who remained the longest serving Governor of Punjab, the most populous province of Pakistan, in office under the General Pervez Musharraf government from October 2001 till May 2008. He was replaced by Salmaan Taseer, a business tycoon and owner of the WorldCall Group.

Mohammed Attique Rahman, MC was a three-star lieutenant general officer in the Pakistan Army, a noted military historian, and a senior government official. He was the martial law administrator (MLA) of West Pakistan in General Yahya Khan's military regime He was the last Governor of West Pakistan and implemented the dissolution of the One Unit scheme, after which he became the first Governor of Punjab province.

Major General Shaukat Sultan Khan, HI(M), afwc, psc, was the Director General of the Inter-Services Public Relations of the Pakistani Armed Forces from 2003 to 2007.

Waheed Arshad, HI(M), TBt, afwc, fsc(t), psc, is a retired three-star general in the Pakistan Army who served as the Chief of General Staff (CGS) at the General Headquarters from 2010 to 2013. His previous appointments at the GHQ include; IG Training and Evaluation (IGT&E), Vice Chief of General Staff (VCGS) and DG Planning at COAS Secretariat. Waheed Arshad also served as the chief Army spokesman heading the Inter Services Public Relations from 2007 to 2008.

The National Defence University or NDU, is a publicly funded military institution located in Islamabad, Pakistan dedicated to the study and research in military science, geo-strategy and international relations.

Lieutenant General Muhammad Azam Khan (1908–1994) was a senior general of the Pakistan army who was a minister under Field Marshal Ayub Khan, the first military ruler of Pakistan. Azam Khan was also a former Governor of East Pakistan.

Major General (retd) Muhammad Anwar Khan, is a career soldier and politician who served as the President of Azad Jammu & Kashmir 25 August 2001 to 23 August 2006. He was replaced by Raja Zulqarnain Khan. He belonged to an elite Sudhan family.

Lieutenant-General Ali Muhammad Jan Aurakzai, is a retired three-star rank general officer in the Pakistan Army who served as the Corps Commander of XI Corps and the principle commander of the Western Command. As Commander, he commanded all military combat assets and oversaw the peaceful deployment of XI Corps in the Northern Areas and the Federally Administered Tribal Areas (FATA).

Lieutenant-General Muhammad Masood Aslam, HI, HI(M), SJ, afwc, psc, is a retired three-star rank general officer and politician who has served as Pakistan's Ambassador to Mexico since June 2011. His last assignment was as the principal commander of the XI Corps and commanded the unified chain of command fighting the pro-Tehrik-e-Taliban forces in the North-West Pakistan from 2007 to 2010. Serving as the field operational commander of the unified forces, Masood directed and oversaw the major operations against the militants, including First Battle of Swat, operations Zalzala, Sherdil, Rah-e-Rast and the Rah-e-Nijat.

Lieutenant General Harbaksh Singh, VrC was a three star General in the Indian Army. As the Western Army Commander, Lt Gen Harbaksh Singh commanded the Indian Army forces and played a key role during the Indo-Pakistani War of 1965. He was awarded the Padma Vibhushan, Padma Bhushan and Vir Chakra.

Moinuddin Haider, HI(M) is a retired lieutenant general of the Pakistan Army, who after retirement served as the Governor of Sindh and then as the Interior Minister of Pakistan. 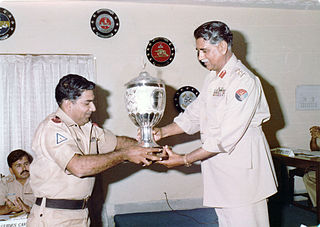 General Mohammad Iqbal Khan, was a retired four-star rank army general in the Pakistan Army who served as the Chairman Joint Chiefs of Staff Committee from being appointed in 1980 until 1984. 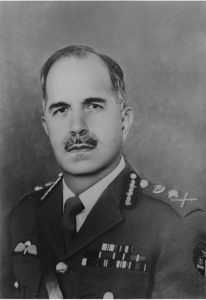 General Muhammad ShariffNI(m), SI(m), was a four-star rank army general in the Pakistan Army who was the first Chairman of Joint Chiefs of Staff Committee, serving in this post from 1976 until tendering his resignation in 1977 over the disagreement with the military takeover of the civilian government by the Pakistani military.

Ghulam Jilani Khan (1925–1999), Urdu: غلام جيلانى خان‎, more widely known as Ghulam Jillani, was a three-star lieutenant general officer in the Pakistan Army who served as the fourteenth Governor of Punjab Province and eleventh Defence Secretary of Pakistan in the military government of President General Zia-ul-Haq.