Auezov's writings were influenced by the poet Abai. Mukhtar's father and grandfather Omarkhan Auez both highly revered the poet, who was a neighbour and a friend of the Auezov family. His grandfather was a storyteller of folk tales, and taught his grandson to read and write. [1]

Auezov was born in a nomadic Muslim family from an area known today as Abay District, in East Kazakhstan Province. His grandfather taught him how to read and write using both the Arabic and Cyrillic script for the Kazakh language. Auezov was educated at the Semipalatinsk Teacher's Seminary and Leningrad State University.

Auezov is best known for his plays. The first play he authored was Enlik-Kebek, a story of two young lovers that resembles the story of Romeo and Juliet. He authored more than twenty plays that dealt with the issues relevant to Socialism in Kazakhstan.

After writing plays, Auezov changed his focus to writing novels. Two novels – Abay and The Path of Abay – dealing with the life of Kazakh poet Abai Qunanbaiuly were the product of the last twenty years of his life. [2]

Auezov's other projects included drawing and translating literature into the Kazakh language. Some translations made by him include Nikolai Gogol's The Government Inspector and Shakespeare's The Taming of the Shrew .

Mukhtar first studied in Kaskabulak, then later a Muslim madrasa in Semipalatinsk. At age of eleven, he moved to a nearby, five-year grammar school. His father Omarkhan died in 1900, and his mother Nurzhamal in 1912. The young Mukhtar was raised by his uncle Kasymbek and his grandfather Auez and grandmother Dinas. In 1907, after a year of study in the madrasa, he was sent to the large Russian school in Semipalatinsk.

Mukhtar Auezov attended the Semipalatinsk Pedagogical Seminary after graduating from the City College. In the 1912–1913 academic year, Mukhtar finished the first seminary class with an award and went on to complete his studies at the Semipalatinsk Seminary in 1919. Around this time he began his acquaintance with Russian and other foreign classics of literature. At the same time, Auezov wrote short stories, poems and articles that began to be published.

"The young Auezov, according to the testimonies of the pedagogues, was marked for his impeccable attention, extraordinary gifts, slim build and aristocratic self-belief. He was an extraordinary sportsman and represented “Yarysh F C”, which at the time was the best football team in the city." [3]

Mukhtar Auezov joined the faculty of a large state school, and he also worked holding various positions in the local government in Semipalatinsk with the Kazakh Central Executive Committee and in Orenburg.

In 1928 Mukhtar Auezov graduated from the Philological Faculty of Leningrad State University and completed his PhD at the University of Tashkent. During the 1930s, his endeavors as a professional writer began to take off. Mukhtar Auezov died during an operation in Moscow on 27 June 1961. He was buried in the Central Cemetery, Almaty. On his grave there stands a bust created by Yevgeny Vuchetich.

Auezov wrote numerous essays, short stories, and plays (many translated into other languages) in different genres.

In 1917, while he was studying at the seminary, he wrote “Enilik-Kebek" (a play based on folk legends). The "Enilik-Kebek" play and the story "Korgansyzdyn Kuni", which was written in 1921 demonstrated to the world his great talent as a writer. From 1923 he began to devote all his energy to the literary arts and to work productively. In the period 1923–1926 he authored stories such as "Okygan azamat", "Kyr suretteri", "Uilenu", "Eskilik kolenkesinde", "Kinamshil boizhetken", "Karaly sulu".

During the period 1923–1928 years he studied and then graduated from Leningrad University in the Faculty of Language and Literature. During the last two years of his studies in Leningrad, he wrote two highly acclaimed novels: "Karash-karash" and "Kokserek".

In 1936 he published a piece of prose called "Tatiananyn kyrdagy ani" in the Kazakh press "Kazak adebieti", that was a section from the future novel of the same name. Some years after that(around 1940), with the cooperation of Leonid Sobolev, he wrote the "Abai" tragedy. The great scientist and teacher, Auezov, worked on the history of Kazakhs literature, and the training of personnel. He was the founder of the Abai studies and the principal author and editor of the multivolume "Kazak adebiet Tarihy". He also wrote a monograph on the Kyrgyz epic Manas.

After the Abai Joly epic, he began writing a new, large-scale epic that described a new era in the future. His first book of that period is called "Osken orken" and was first published posthumously in 1962. A period of blooming of Kazakh drama is associated with the works of Auezov. He wrote over twenty plays and translated such classic works of world and Russian drama as The Inspector by Gogol, Othello and The Taming of the Shrew by Shakespeare, Aristocrats by Nikolai Pogodin, Spring Love by Konstantin Trenyov, and Officer of the Navy by A. Kron.

In 1960, together with a group of Soviet writers, he visited the United States. In the summer of 1960, he started work on the series of essays named “The American Impressions”. From mid-summer 1960, he began work on the novel named “The Young Tribe”. In March 1961, Auezov embarked on a visit to India that included participation in the work of the III International Congress for Peace in Delhi together with a delegation headed by Nikolai Tikhonov. In June of that same year, he planned to visit England, the land of Shakespeare, but his untimely death meant that his wish to travel to England did not occur. On June 3, 1961, he traveled to Moscow for medical tests. On June 27, 1961 – his heart failed during a surgical operation. [4]

"Abai Zholy" (The path of Abai)

In his formative years, Mukhtar listened to the memories of his grandfather that told of Abai and Kunanbay. The destiny of Mukhtar Auezov was linked by many threads to the life of Abai the hero great inspiration of his life. Abai himself graced family celebrations, arranged for Auez to mark the birth of his grandson. Nurganym, one of the wives of Kunanbai father of Abai, was the sister of Auez.

Mukhtar later became friends with the son of Abai Turagulom and married Camille, granddaughter of the great poet, that is the daughter of Magauov. Auezov met Dilda, the first wife of Abai with whom he received a great deal of information. More information about Abai was forthcoming from Eigerim another of Abai’s life partners who survived her husband for more than a decade.

Mukhtar Omarhanuly for 15 years wrote his famous four-volume epic historical novel called "Abai Joly". It was translated into Russian. In 1949 two books of the novel "Abai" received the first level award of the Union of Soviet Socialist Republics. This epic, which ended with four books, was awarded the Lenin Prize. was translated into 30 languages, and received rave reviews from readers all over the world.

"Abai Zholy" is one of the most popular and valuable novels written by Mukhtar Auezov. The first book of the series was published in 1942 and after five years in 1947 “Abai”, the second of the series was published, then came the third book in 1952 called “Abai aga” (Brother Abai). Finally, the fourth book was released in 1956. Later all of the books were repackaged and renamed as “Abai zholy” (The Path of Abai). The first book and second books each have 7 chapters and one epilogue. The third book has 6 chapters as has the Fourth and one epilogue entire epic is divided into 20 short chapters each of which includes uniquely interesting situations.

Each chapter’s name precisely demonstrates the psychological state of the events within the story. If we compare there is much more drama, tragedy, sadness and sorrow than positive and happy moments. In the first book we can clearly see how the young and inexperienced boy grows up and at the end of the fourth book we see how he became an adult and changed and who ultimately fails. [5]

Mukhtar Auezov wrote the libretto of the opera Abai .

Ibrahim (Abai) Qunanbaiuly was a Kazakh poet, composer and Hanafi Maturidi theologian philosopher. He was also a cultural reformer toward European and Russian cultures on the basis of enlightened Islam. His name is also transliterated as Abay Kunanbayev ; among Kazakhs he is known as Abai.

Abay may refer to:

Kúlásh Jasynqyzy Báıseıitova was a Soviet-Kazakh opera singer ; one of the founders of Kazakh opera, actress of drama theatre, public figure, Deputy of the Supreme Soviet of the Kazakh SSR 1-3-go convening. Knight of the Order of Lenin (1945). One of the first owners of the title "People's Artist of the USSR" (1936) and one of the youngest for all his years of the award.

Bakhytzhan Musakhanuli Kanapyanov is a Kazakhstani poet, writer, publisher, translator. Member of the Russian and the Kazakh PEN clubs, an honorary professor at the Shakarima University (Semipalatinsk) and an academician of the Crimean Literary Academy. He is an academic of journalism in Kazakhstan.

Sabit Mukanov was a Kazakh poet, social activist, and academic. He was the head of the Writers' Union of Kazakhstan from 1936-37 and again from 1943-52.

Karkaraly, also known as Karkaralinsk, is the capital of the Karkaraly District in the Karaganda Region of Kazakhstan. Permanent settlement in the area began as a Cossack settlement, which evolved into a Kazakh cultural center due to the Koyandy Fair which took place in the town. Its population was 9,212 as of 2009.

Ilyas Zhansugurov was a Kazakh poet and writer. He made a significant contribution to the development of national poetic culture, creatively developed the traditions of Kazakh oral folk art. The town of Zhansugirov in Almaty Province is named after him and he is commemorated in Taldykorgan and Almaty.

Kazakh literature is defined as 'the body of literature, both oral and written, produced in the Kazakh language by the Kazakh people of Central Asia'.

Gulnara Sarsenova is a Kazakhstan film producer who has produced several award-winning films. She is the only Central Asian producer to receive the Best Asian Filmmaker award at Busan International Film Festival, one of the most significant film festivals in Asia, in 2008.

Sergebayev Yesken Amanzholovich - is a prominent Soviet and Kazakh sculptor, former Dean of Paintings and Sculptor Faculty, currently he is the Professor and Head of Sculptor Department of Kazakh National Academy of Arts named after T.Zhurgenov. 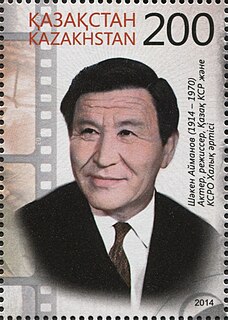 Shaken Kenzhetaiuly Aimanov was a Kazakh Soviet actor and film director. He is considered to be the father of Kazakh cinematography, as well as an iconic film director and actor. He directed eleven films between 1954 and 1970.

Abdizhamil Karimuly Nurpeisov is the People's writer of Kazakhstan, one of the word-painters who have made great contributions to the Kazakh literature. He was born in Kyzylorda region, in the neighborhood of Ushkon of the village Kulandy situated in Aral area.

Cinema of Kazakhstan refers to the film industry based in Kazakhstan. Cinema in Kazakhstan can be traced back to the early 20th century. Today, Kazakhstan produces approximately fifteen full-length films each year.

Abai is an opera in two acts, created by Latif Khamidi and Akhmet Zhubanov, on a libretto of Mukhtar Auezov, inspired by a slice of the life of the poet Abai Qunanbaiuli (1845–1904).

Auezov Theater with a full name of Kazakh State Academic Drama Theater named after M.O. Auezov is located on Kurmangazy Street in Almaty, Kazakhstan near the Esentai River.

Smagul Abatuly Yelubay is a Kazakh writer and scriptwriter. He serves as a Secretary of Writers' Union of Kazakhstan.

Kuman Nurmakhanuly Tastanbekov was a Kazakh actor. He was the holder of the Lenin Komsomol Prize in Kazakhstan (1976). He worked for the Kazakh State Academic Drama Theater since 1969.

Malik Gabdullin was a Soviet-Kazakh philologist, professor, and writer. A veteran of the Second World War, he was awarded the title Hero of the Soviet Union for his bravery in battle.