A mukim is a type of administrative division used in Brunei, Indonesia, Malaysia and Singapore. The word mukim is a loanword in English. [1] However, it was also originally a loanword in Malay from the Arabic word: مقيم (means resident). The closest English translation for mukim is township. [2] [3]

In Brunei, a mukim is the immediate subdivision of a district (Malay : daerah). The equivalent English word for 'mukim' is 'township'.

There are 38 mukims in Brunei. Each mukim is an administrative area made up of several kampung (Malay for "village"). A mukim is headed by a penghulu, which is an elected office. The number of mukims in each of the districts in Brunei is as follows:

In Indonesia, mukim means 'a place to stay' or 'the one who stay', Permukiman generally use to refer 'a settlement'. [4] The term mukim used exclusively as a subdivision of a district in Aceh. A mukim contains some villages.

In Malaysia, a mukim can either be a subdivision of a daerah (district or county) or a subdivision of an autonomous sub-district (daerah kecil), as per Section 11(c) of the National Land Code 1965. The mukim designation was not used in Putrajaya however; the term "precinct" (presint in Malay) is used instead. The northern state of Perlis, due to its small size, was not divided into daerahs, but straight to the mukim level. In Kelantan, the term daerah corresponds to the mukim level in other states.

Number of Mukims for each states in Malaysia

Brunei-Muara District or simply Brunei-Muara is one of the four districts of Brunei. The district borders the South China Sea to the north, Brunei Bay to the east, Limbang District of the Malaysian state of Sarawak to the south, and Tutong District to the west. It has the smallest area among the four districts, with 571 square kilometres (220 sq mi), yet is the most populous, with 289,630 people as of 2016. Bandar Seri Begawan, the country's capital, is located in this district, which is also de facto the district's capital. The district is also home Brunei International Airport, the country's only international airport, as well as Muara Port, the main and only deep-water port in the country. The Brunei River flows within this district and is home to Kampong Ayer, a historic stilt settlement directly on the river.

Malaysian and Indonesian are two standardised varieties of the Malay language, used in Malaysia and Indonesia, respectively. Both varieties are generally mutually intelligible, yet there are noticeable differences in spelling, grammar, pronunciation and vocabulary, as well as the predominant source of loanwords. The differences can range from those mutually unintelligible with one another, to those having a closer familial resemblance. The regionalised and localised varieties of Malay can become a catalyst for intercultural conflict, especially in higher education.

A daïra or daerah is an administrative division in Algeria and Western Sahara in West Africa, as well as Brunei, Indonesia and Malaysia in Southeast Asia. It is commonly translated in English as "district". 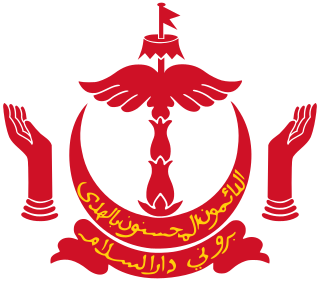 The administrative divisions of Brunei mainly consist of daerah (districts), mukim (subdistricts) and kampung or kampong (villages). They are organised hierarchically, with daerah being the first level and kampong the third level.

Berakas 'A' is a mukim or subdistrict of Brunei-Muara, Brunei. It borders the mukims of Mentiri and Berakas 'B' to the east, Kianggeh to the south, Gadong 'B' to the south-west and Gadong 'A' to the west, as well as the South China Sea to the north. The community of Berakas 'A' is headed by a penghulu and the incumbent is Abdul Ahmad bin Husain. In 2011, the population of Berakas 'A' was 31,180.

Keriam is a mukim or subdistrict in Tutong, a district of Brunei. It is a second-level administrative division in Brunei. Keriam is headed by a penghulu, which is currently held by Muhammad Taha bin Abdul Rauf.

Amo is a mukim or subdistrict in the Temburong District of Brunei. It is located in the eastern part of the district, bordering the mukims of Batu Apoi to the north-east, Bokok to the west and Bangar to north-west, as well as the Malaysian state of Sarawak to the east and south. Amo has an area of 542 square kilometres (209 sq mi); as of 2016, it had a total population of 2,240.

Bangar is a mukim in the Temburong District of Brunei. It is located in the north-west of the Temburong District bordering Mukim Labu to the north, Mukim Batu Apoi to the east, Mukim Amo to the south-east, Mukim Bokok to the south-west and Limbang, Sarawak (Malaysia) to the west and north. Mukim Bangar has one island within its vicinity which is Pulau Kibi. Bangar has a total area of 113 square kilometres (44 sq mi); as 2016, it had a total population of 2,696.

Penghulu is the headman or chief of a region in traditional societies on the Malay archipelago in Maritime Southeast Asia. The term is currently used in Brunei and Malaysia as the community leader of the smaller country subdivision or settlement. 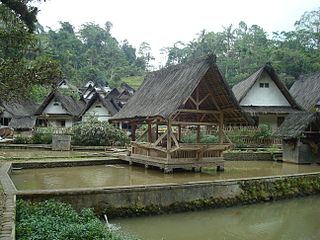 A Kampung, Kampoeng, or Kampong is a village in Brunei, Indonesia, Malaysia and Singapore and a "port" in Cambodia. The term applies to traditional villages, especially of indigenous people, and has also been used to refer to urban slum areas and enclosed developments and neighbourhoods within towns and cities in Indonesia, Malaysia, Singapore, Cambodia, Sri Lanka and Christmas Island. The traditional kampung village designs and architecture have been targeted for reform by urbanists and modernists and have also been adapted by contemporary architects for various projects. Traditional kampungs are also a tourist attraction, such as Panglipuran village in Bali, Indonesia — awarded as one of the world's cleanest village in 2016.

Lambak Kanan, formally known as Lambak Kanan National Housing Scheme, is a public housing estate on the northern outskirts of Bandar Seri Begawan, the capital of Brunei. It officially consists of five village subdivisions which are under Berakas 'B', a mukim (subdistrict) of Brunei-Muara District. Lambak Kanan is de facto a suburb of the capital.

Kemben is an Indonesian female torso wrap historically common in Java and Bali. It is made by wrapping a piece of kain (clothes), either plain, batik printed, velvet, or any type of fabrics, covering the chest wrapped around the woman's torso.

Pancha Delima is a small residential neighbourhood in Bandar Seri Begawan, the capital of Brunei. It is officially a village subdivision under Berakas A, a mukim (subdistrict) of Brunei-Muara District; the incumbent ketua kampung or village head is Zulkifli bin Awang Ya'akub. The postcode for Pancha Delima is BB4513.

Limbongan was a neighbourhood in Kampong Ayer, the riverine stilt settlement in Bandar Seri Begawan, the capital of Brunei. It was officially a village subdivision under Tamoi, a mukim (subdistrict) of Brunei-Muara District, and had the postcode BL1312. Limbongan was one of the traditional stilt neighbourhoods which had existed along the banks of the Kedayan River, a tributary of the Brunei River in the vicinity of Kampong Ayer, before they were eventually demolished in the 2010s and redeveloped into Taman Mahkota Jubli Emas, a riverfront park.

Samping or Kain Dagang is a traditional Malay costume originated from the court of Malacca, and is traditionally worn by men and women in Brunei, Indonesia, Malaysia, Singapore and southern Thailand. This type of traditional costume is a part of the national dress of Brunei and Malaysia.

Kerikam is a coarse metal thread made of gold or silver used for embroidering. The term kerikam comes from the French word clinquant. It is an important material in the Malay art of embroidery, traditionally used by the Malays in Brunei, Indonesia, Malaysia and southern Thailand. Kerikam embroidery can be found on baju kurung, kebaya and tudung.