Multi-National Corps – Iraq (MNC-I) was a formerly multinational, later U.S. only, army corps created on 15 May 2004, fighting the Iraq War. Its superior body, the Multi-National Force-Iraq (MNF-I) had replaced Combined Joint Task Force 7 on May 15, 2004. The change was made due to "concerns that had existed for some period of time, that the Combined Joint Task Force 7 headquarters was not sufficient to handle the range of military operations in Iraq, including peace support, civil military operations, and at the same time conduct strategic engagement such as talking to the sheiks and talking to the political authorities." [1]

Multi-National Force-Iraq was established to handle strategic level issues while Multi-National Corps – Iraq, a subordinate command, directed the tactical battle. A number of US Army corps headquarters rotated into Iraq to provide the MNC-I headquarters. Also created under MNF-I was the Multi-National Security Transition Command - Iraq (MNSTC-I), which primarily directed the reconstruction of Iraqi security forces. With the drawdown of US forces from Iraq per the Status of Forces Agreement and President George W. Bush's announced timeline, Multi-National Corps – Iraq merged back into its parent command of MNF-I, which was renamed United States Forces – Iraq (USF-I) following the withdrawal of all remaining coalition partners from the country.

The complete OIF-3 rotation to brigade level under MNF-I was as follows:

The 4th Infantry Division's second deployment to Iraq began in the fall of 2005. The division headquarters replaced the 3rd Infantry Division, which had been directing security operations as the headquarters for Multi-National Division - Baghdad. The 4th assumed responsibility on January 7, 2006 for four provinces in central and southern Iraq: Baghdad, Karbala, An-Najaf and Babil. On 7 January 2006, MND-Baghdad also assumed responsibility for training Iraqi security forces and conducting security operations in the four provinces.

The 36th Aviation Brigade's subordination is unclear. It is definitely deployed within MNF-I but whether it is actually under 4th Infantry Division/MND Baghdad is unknown.

The complete rotation to brigade level under MNF-I is as follows:

The Pentagon announced on 20 June 2006 the units that will be deploying to Iraq as part of the OIF 06-08 rotation of forces: 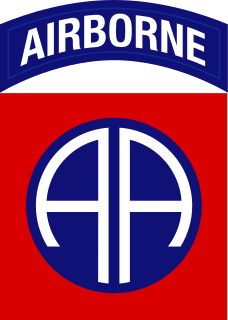 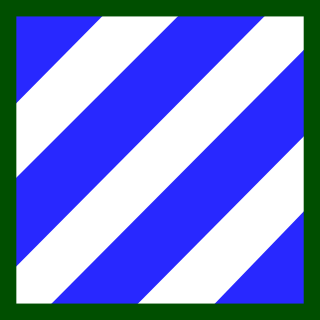 The 3rd Infantry Division is a combined arms division of the United States Army based at Fort Stewart, Georgia. It is a direct subordinate unit of the XVIII Airborne Corps and U.S. Army Forces Command. Its current organization includes a division headquarters and headquarters battalion, two armored brigade combat teams, one National Guard infantry brigade combat team, one task force battalion, one aviation brigade, a division artillery, a sustainment brigade and a combat sustainment support battalion along with a maneuver enhancement brigade. The division has a distinguished history, having seen active service in World War I, World War II, the Korean War, Vietnam War, and the Global War on Terror. The Medal of Honor has been awarded to 60 members of the 3rd Infantry Division, making the division the most honored in the Army. 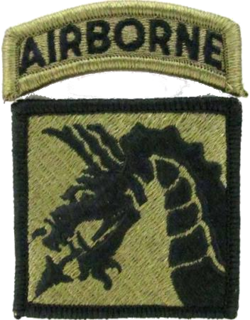 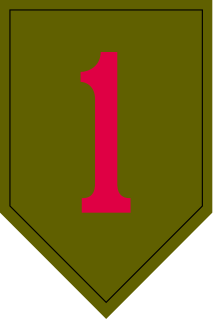 The 1st Infantry Division is a combined arms division of the United States Army, and is the oldest continuously serving division in the Regular Army. It has seen continuous service since its organization in 1917 during World War I. It was officially nicknamed "The Big Red One" after its shoulder patch and is also nicknamed "The Fighting First." The division has also received troop monikers of "The Big Dead One" and "The Bloody First" as puns on the respective officially sanctioned nicknames. It is currently based at Fort Riley, Kansas.

The 4th Infantry Division is a division of the United States Army based at Fort Carson, Colorado. It is composed of a division headquarters battalion, three brigade combat teams, a combat aviation brigade, a division sustainment brigade, and a division artillery.

The 39th Infantry Brigade Combat Team, formerly called the 39th Infantry Brigade (Separate) – nicknamed the Arkansas Brigade or the Bowie Team – is an infantry brigade combat team of the United States Army made up of soldiers from the Arkansas, Nebraska, and Missouri Army National Guard. The 39th IBCT was one of fifteen National Guard brigades designated as an enhanced separate brigade. Brigades with this designation received higher levels of training, more advanced equipment, and higher troop levels than normal National Guard brigades. It also made these brigades a self-contained combat unit capable of intelligence, reconnaissance, maneuver, fire support, combat service support, and command and control without having to require attachments or detachments during deployments. In 2005, it was converted to the standard modular IBCT design as part of Army transformation. 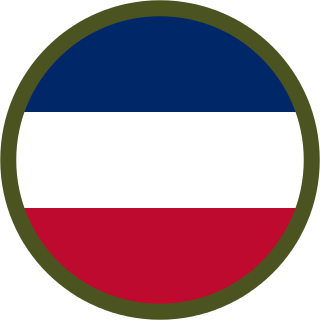 Reconnaissance, surveillance, and target acquisition (RSTA) refers to a joint doctrine of reconnaissance, surveillance and target acquisition conducted by the United States Armed Forces. RSTA operations are designed to support military operations at a strategic, operational, or tactical level, either by dedicated RSTA forces or those which possess the capability. 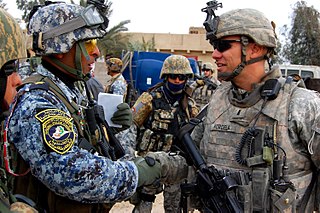 Below is an estimated list of the major units deployed within the Multi-National Force – Iraq and other United States military units that were operating in Iraq under the U.S. Central Command (USCENTCOM) in 2009, during the Iraq War.

Camp Taji, also known as Camp Cooke, is a military installation used by Iraqi and coalition forces near Taji, Baghdad Governorate, Iraq. The camp is located in a rural region approximately 27 km (17 mi) north of the capital Baghdad in the Baghdad Governorate.

Majid al Tamimi Airbase, officially known as the Tikrit Air Academy and formerly as FOB Speicher, COB Speicher, and Al Sahra Airfield is an air installation near Tikrit in northern Iraq. The installation is approximately 170 kilometers north of Baghdad and 11 kilometers west of the Tigris River. Prior to 2003, Al Sahra Airfield was the main base of the Iraqi Air Force Air Academy. The United States Army captured the base from the Iraqi Army during the Iraq War and used it as the headquarters of the United States Division–North. The airfield is served by two main runways measuring 9,600 feet (2,900 m) long with a shorter runway measuring 7,200-foot (2,200 m). The Americans named the airfield after Captain Michael Scott Speicher, a United States Navy pilot who was killed in action in Iraq during the 1991 Gulf War.

Operation Phantom Strike was a major offensive launched by the Multi-National Corps - Iraq on 15 August 2007 in a crackdown to disrupt both the al-Qaeda-affiliated Islamic State of Iraq and Shia insurgent operations in Iraq. It consisted of a number of simultaneous operations throughout Iraq focused on pursuing remaining ISI terrorists and Iranian-supported insurgent groups. It was concluded in January 2008 and followed up with Operation Phantom Phoenix.

Forward Operating Base Kalsu, also known as 'FOB Kalsu', COS Kalsu or simply Camp Kalsu, was a U.S. Military installation in Iskandariya, Iraq, 20 miles south of Baghdad. It was officially closed by members of the 1st Brigade Combat Team, 1st Cavalry Division, on December 12, 2011 as part of the US Army's withdrawal from Iraq.

The 48th Infantry Brigade Combat Team is a modular infantry brigade of the Georgia Army National Guard. One of the oldest units in U.S. Army history, the lineage of the 48th Infantry Brigade can be traced back to 1825. It is one of few units in the US military that also saw service as a unit of the Confederate States of America during the American Civil War. Today, the 48th IBCT is part of the U.S. Army's "Associated Units" program where it's aligned under the 3rd Infantry Division, a combined arms combat maneuver unit of the Regular Army.

Combined Joint Task Force 7 was the interim military formation that directed the U.S. effort in Iraq between June 2003 and May 2004. It replaced the Coalition Forces Land Component Command on 14 June 2003. CFLCC was the land forces component of United States Central Command that carried out the initial invasion of Iraq, was established by Commander, U.S. Army Forces Central Command, in 2002/3, to oversee two corps-sized organizations, I Marine Expeditionary Force and V Corps. These two corps-level formations carried out Operation Iraqi Freedom which began on 20 March 2003. 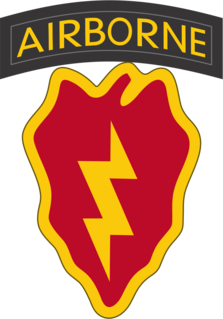 The 4th Brigade Combat Team (Airborne), 25th Infantry Division is an airborne infantry brigade combat team (IBCT) of the United States Army. The unit is stationed at Joint Base Elmendorf-Richardson in Anchorage, Alaska and is the only airborne brigade combat team in the Pacific Theater. It is also the newest airborne IBCT and one of only five in the United States Army; the others are the three IBCTs of the 82nd Airborne Division and the 173rd Airborne Brigade.