The Grade II listed structure of Mumbles Pier is an 835 feet (255 m) long Victorian pier built in 1898. It is located at the north-western corner of Swansea Bay near the village of Mumbles, within the city and county of Swansea, Wales.

Designed by W. Sutcliffe Marsh and promoted by John Jones Jenkins of the Rhondda and Swansea Bay Railway, the pier opened on 10 May 1898 at a cost of £10,000. It was the western terminus for the world's first passenger carrying railway, the Swansea and Mumbles Railway; and a major terminal for the White Funnel paddle steamers of P and A Campbell, unloading tourists from routes along the River Severn and Bristol Channel.

In the summer of 1899, Will C. Pepper, father of the musicians Harry S. Pepper and Dick Pepper, founded a long-running concert party on the Pier called the White Coons. [1]

The Amusement Equipment Company (AMECO) gained a licence to operate the pier from 1 October 1937. The pier was requisitioned in World War II, but AMECO acquired the freehold in 1957, extensively reconstructing the facility and adding a landing jetty. A new arcade was built on the pier's frontage in 1966. AMECO spent between £25,000 and £30,000 per annum on the maintenance and replacement of the steelwork between 1975 and 1985. [2]

Today, the pier is used only for fishing and tourism, offering panoramic views of Swansea Bay with the Mumbles Lighthouse on one side and Port Talbot on the other. Halfway along the Pier on the Bay side is a Royal National Lifeboat Institution lifeboat station. Still housing the historical records of the local Mumbles lifeboat, the House also currently handles the 'Tyne' Class boat. The Pier complex is owned and operated by the Bollom family.

The land beside the pier is now an entertainment complex comprising bars, restaurant, an ice-skating rink (opened in 2006 and featured in an ITV Wales documentary series) and an amusement arcade.

During a major renovation in 2012, a new lifeboat station and RNLI gift shop was built at the end of the pier and fishing platforms added.

In recent years the pier has fallen into a state of disrepair with a large section fenced off to visitors and other areas patched up to maintain safety. The owners plan to repair the pier along with the regeneration of the nearby area. The plans include the building of a new hotel and spa, a conference and exhibition centre and a new boardwalk linking the Knab rock with the pier. [3]

The amusement arcade beside the pier contains over 100 arcade machines and includes a miniature bowling alley on the upper floor.

Mumbles is a headland sited on the western edge of Swansea Bay on the southern coast of Wales. The name Mumbles is also applied to the district encompassing the electoral wards of Oystermouth, Newton, West Cross, and Mayals. In the 2018 Best Places to Live in the UK report, The Sunday Times listed Mumbles as the best in Wales. 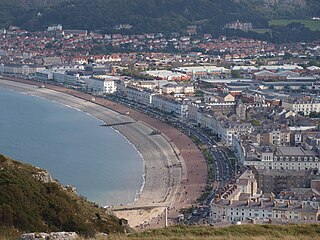 Llandudno is a seaside resort, town and community in Conwy County Borough, Wales, located on the Creuddyn peninsula, which protrudes into the Irish Sea. In the 2011 UK census, the community, which includes Gogarth, Penrhyn Bay, Craigside, Glanwydden, Penrhynside and Bryn Pydew had a population of 20,701. The town's name is derived from its patron saint, Saint Tudno.

Porthcawl is a town and community on the south coast of Wales in the county borough of Bridgend, 25 miles (40 km) west of the capital city, Cardiff and 19 miles (31 km) southeast of Swansea. Historically part of Glamorgan and situated on a low limestone headland on the South Wales coast, overlooking the Bristol Channel, Porthcawl developed as a coal port during the 19th century, but its trade was soon taken over by more rapidly developing ports such as Barry. Northwest of the town, in the dunes known as Kenfig Burrows, are hidden the last remnants of the town and Kenfig Castle, which were overwhelmed by sand about 1400. 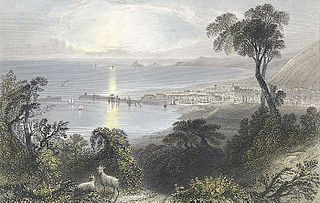 Mumbles Lighthouse, completed in 1794, is a lighthouse located in Mumbles, near Swansea. The structure, which sits on the outer of two islands off Mumbles Head, is clearly visible from any point along the five mile sweep of Swansea Bay. Along with the nearby lifeboat station, it is the most photographed landmark in the village. 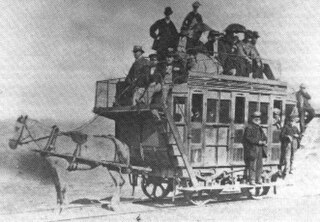 The Swansea and Mumbles Railway was the venue for the world's first passenger railway service, located in Swansea, Wales, United Kingdom. 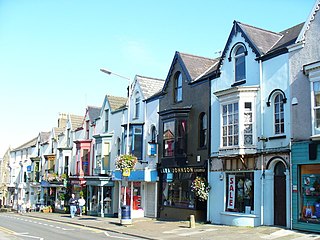 Oystermouth is a village and electoral ward in the district of Mumbles, Swansea, Wales. It is part of the Mumbles community.

The River Tawe is a river in the south of Wales. It flows in a principally southwesterly direction for some 48 km (30 mi) from its source below Moel Feity in the Old Red Sandstone hills of the western Brecon Beacons to the Bristol Channel at Swansea. Its main tributaries are the right bank Upper and Lower Clydach Rivers and the Afon Twrch. The total area of the catchment is some 246 km2. The Tawe passes through a number of towns and villages including Ystradgynlais, Ystalyfera, Pontardawe, and Clydach and meets the sea at Swansea Bay below Swansea. The Tawe Valley is more commonly known as the Swansea Valley.

The Maritime Quarter is a residential area of Swansea, Wales, UK located immediately south of the city centre shopping core. It falls within Swansea's Castle ward. The area is bounded by Brynmill to the west, Swansea Bay to the South, the River Tawe to the east and the A4067 to the north.

Swansea Docks is the collective name for several docks in Swansea, Wales. The Swansea docks are located immediately south-east of Swansea city centre. In the mid-19th century, the port was exporting 60% of the world's copper from factories situated in the Tawe valley. The working docks area today is owned and operated by Associated British Ports as the Port of Swansea and the northern part around the Prince of Wales Dock is undergoing re-development into a new urban area branded the SA1 Swansea Waterfront.

Mumbles Beach is a very small sheltered area of sand and rock pools sandwiched between Swansea Bay beach and Bracelet Bay in the south eastern corner of the Gower Peninsula, Swansea, Wales. 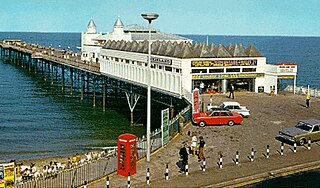 The Victoria Pier was a pier in the seaside resort of Colwyn Bay, Wales. Despite dismantlement since May 2018, much of the metalwork remains and retains the legal status of a grade-II listed structure. Plans for a partial re-build in 2019 have been made by the pier's owner, Conwy County Borough Council.

The Swansea Bay area of Wales is located north of the sea area of Swansea Bay. The term Swansea Bay is used by the Welsh Assembly Government for policy planning purposes as well as by a number of other organisations.

Swansea Beach stretches for five miles along Swansea Bay between the Maritime Quarter and the "Knab Rock" near Mumbles in Wales. It is backed by a promenade/cycle track and a coastal road. The southern section of the Swansea Bay beach between Blackpill and Mumbles is designated Site of Special Scientific Interest.

Jessie Ace (1860–1936) and Margaret Wright are known for their rescue of crewmen, from the Mumbles lifeboat, which had gone to assist a wrecked German barque during an 1883 storm at Mumbles Head, Wales.

All Saints' Church, Oystermouth is an Anglican church in the diocese of Swansea and Brecon, south Wales. It is located in Mumbles and is a Grade II listed building The church stands on a hillside, not far from Oystermouth Castle.