Munetaka Higuchi (樋口 宗孝, Higuchi Munetaka) (December 24, 1958 – November 30, 2008) was a Japanese musician and record producer. He is best known as the original drummer of the heavy metal band Loudness, but first rose to prominence as a member of Lazy in the 1970s.

From a young age, he was considered a talented drummer. During his high school years, Higuchi played in seven bands. But he was not happy with this situation, wanting to focus his time on only one band. At this point, schoolmate and future bandmate Akira Takasaki came along and they formed Lazy. [1] Lazy was formed by very young musicians and started playing easy-listening pop-rock, that slowly progressed to more complex music. Higuchi was identified in the band by the moniker "Davy". [2]

When he and Takasaki shifted their musical interests to hard rock and heavy metal, they founded Loudness in 1981. [1] During his time with Loudness, Higuchi released his first solo album, Destruction, in 1983. [3] In the same year he produced and played drums on Mari Hamada's studio albums Lunatic Doll and Romantic Night . [4] He left Loudness in 1992, and resumed his solo career in the late-1990s, working also on side projects, including Sly (with former Loudness' singer Minoru Niihara), [5] Bloodcircus, Rose of Rose, and the Rock 'n' Roll Standard Club Band, besides collaborating with dozens of Japanese artists, both as producer and as drummer.

In 1997, as "Munetaka Higuchi & Dream Castle", he released the album Free World. The band featured many famous musicians from the jazz and rock/metal spheres, like Steve Vai, Stanley Clarke, Billy Sheehan, Ty Tabor, Terry Bozzio, T. M. Stevens, Ronnie James Dio, Richie Kotzen, Paulinho Da Costa and others. [6] The album was released on February 21, 1997, in Japan. [7] In 1998, he produced Cozy Powell Forever ~ Tribute to Cozy Powell, [8] a tribute album to the recently deceased drummer Cozy Powell, very popular in Japan. For the album, Higuchi had the collaboration of the best Japanese heavy metal musicians and was able to reunite his former bandmates of Loudness. [9] A tour in support of the album was made with musicians from Loudness and Sly. [10]

He returned to Loudness in 2000, maintaining his high profile in the metal genre.

On April 14, 2008, just two months after Loudness released the album, Metal Mad , it was announced that he was diagnosed with hepatocellular carcinoma, a type of liver cancer. [11] On November 30, 2008, Munetaka died at the age of 49 in a hospital in Osaka, Japan. [12] His death had a vast echo in Japanese media and in the entertainment business. [13]

Loudness is a Japanese heavy metal band formed in 1981 by guitarist Akira Takasaki and drummer Munetaka Higuchi. They were the first Japanese metal act signed to a major label in the United States. Loudness subsequently released 26 studio albums and nine live albums by 2014 and reached the Billboard Top 100 during their heyday as well as charting on Oricon dozens of times. Despite numerous changes in its line-up, with Takasaki the sole constant member, the band continued their activities throughout the 1990s, finally reuniting the original line-up in 2001. This incarnation released a further seven albums until November 30, 2008, when original drummer Munetaka Higuchi died from liver cancer at a hospital in Osaka at age 49. He was replaced with Masayuki Suzuki. 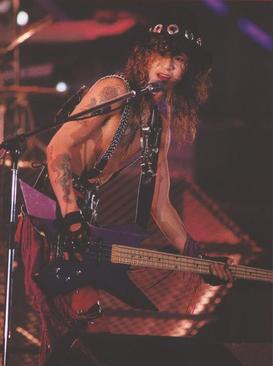 Taiji Sawada, also known mononymously as Taiji, was a Japanese musician and songwriter. He is best known as the former bassist of the rock band X. X rose to prominence in the late 1980s and early 1990s, credited as founders of the Japanese visual kei movement. After leaving X in January 1992, Taiji went on to work with many other bands, including Loudness and D.T.R. 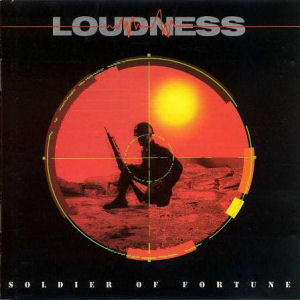 Soldier of Fortune is the eighth studio album by Japanese heavy metal band Loudness, and their first with American vocalist Mike Vescera. It is the band's third album produced by Max Norman after Thunder in the East in 1985 and Lightning Strikes in 1986. The album is co-produced by Fates Warning's producer Roger Probert. Despite the good critical reception and the strong support given by the label, the album failed to chart in the US. The CD contains heavy and fast tracks like "Soldier of Fortune", "You Shook Me", "Red Light Shooter", "Running for Cover", "Faces in the Fire" and "Demon Disease".

Akira Takasaki is a Japanese musician. He is best known as the lead guitarist and sole constant member of the heavy metal band Loudness. He is also the guitarist of the band Lazy, with which he first rose to prominence in the 1970s.

Minoru Niihara is a Japanese singer. He is the original and current lead vocalist of the heavy metal band Loudness. 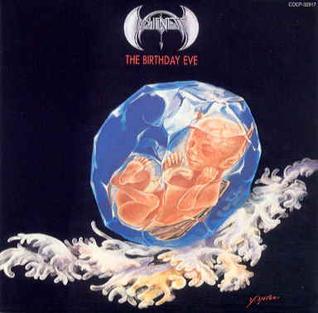 The Birthday Eve is the first studio album by Japanese heavy metal band Loudness. It was released in 1981 only in Japan. The 24bit digitally remastered Japanese limited edition CD includes two additional tracks not on the original release, coming from the first single of the band. The success of the album was measured by Loudness' sold out debut concert at Asakusa International Theater, in front of an audience of 2.700.

Devil Soldier is the second studio album by Japanese heavy metal band Loudness. It was released in 1982. The American Daniel McClendon was called to engineer the sound of this album, because there was no Japanese technician experienced enough in heavy metal records at the time. The album won the award for Best Heavy Metal record of the year in Japan. The reissue in CD of 2005 contains two bonus tracks, coming from the second single of the band.

The Law of Devil's Land is the third studio album by the Japanese heavy metal band Loudness. It was released in 1983 only in Japan and later distributed in Europe by Roadrunner Records. The CD reissue of 2005 contains two extra songs coming from the English version of the band's third single.

Hurricane Eyes is the seventh studio album by Japanese heavy metal band Loudness. It was released in 1987 worldwide with standard English lyrics. A "Japanese Version" was subsequently released only in Japan later in the year with Niihara singing most of the lyrics in Japanese. The album was produced by the famous producer and sound engineer Eddie Kramer, who had worked with the likes of The Rolling Stones, Led Zeppelin, Jimi Hendrix and Kiss. The song "So Lonely", a reprise of "Ares Lament" from the album Disillusion of 1984, was instead produced by Andy Johns, another world-famous producer. This was the last Loudness album to enter the US Billboard 200 chart, where it remained for 4 weeks, peaking at No. 190.

Heavy Metal Hippies is the eleventh studio album by Japanese heavy metal band Loudness. It was recorded and mixed by Chris Tsangarides and released in 1994 only in Japan. After the defection of bassist Taiji Sawada, Akira Takasaki played both the lines of bass and guitar on the album. In addition, drummer and band co-founder Munetaka Higuchi was replaced by Hirotsugu Homma.

Spiritual Canoe is the fifteenth studio album by Japanese heavy metal band Loudness. It was released in 2001 only in Japan. It also marked the first time since 1988's Jealousy that the original and classic line-up recorded together. 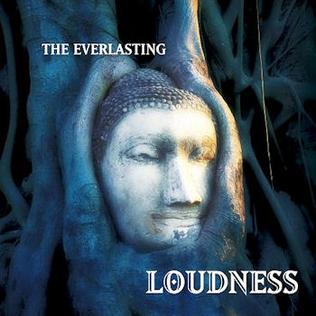 The Everlasting is the twenty-second studio album by Japanese heavy metal band Loudness. It was released in 2009 only in Japan, after the death of original drummer Munetaka Higuchi, whose pre-recorded drum tracks were used on this album. It was also 15th and last album recorded by the original line-up. The song "I Wonder" introduces new drummer Masayuki Suzuki. The album also features a quasi-return to their 1980s sound in "Flame of Rock" and "I Wonder". The cover artwork is inspired by a Thailand's sculpture called "Budda Head in Tree".

Eurobounds is the second home video released by the Japanese heavy metal band Loudness. It was released on BETA, VHS, Laserdisc and VHD formats in 1984. This release documented the first European tour of the band, with footage from concerts in England, Holland, Belgium and West Germany. Columbia Records remastered the video and re-released it in DVD format in 2000. A live album with the sound track of the DVD was also released in 2000, with the same cover art of the DVD.

Live Loudest at the Budokan '91 is the eight live album by the Japanese heavy metal band Loudness. It was released at the end of 2009 as a package of a CD and a DVD, with recordings and footage from a concert held in Tokyo Budokan during the 1991 tour to promote the On the Prowl album, with Mike Vescera on vocals.

Tusk of Jaguar is the first solo studio album by Japanese guitarist Akira Takasaki, best known for his work in the rock bands Loudness and Lazy. It was released in 1982 only in Japan and reissued in 2005. The album is actually a joint effort of Takasaki and keyboard player Masanori Sasaji, who composed three tracks and arranged and co-produced the recording. A large contribution was given to the album by Takasaki's bandmates in Loudness, who play in most tracks and collaborated to the musical arrangements. However, the music of Tusk of Jaguar is much more varied than in any Loudness' album, with its music ranging from hard rock to progressive rock to jazz fusion, reminiscing of some Dixie Dregs' and Al Di Meola's works. The precise and fast guitar playing by Takasaki is anyway always present in every track and he even takes the lead vocal spot in the song "Ebony Eyes". 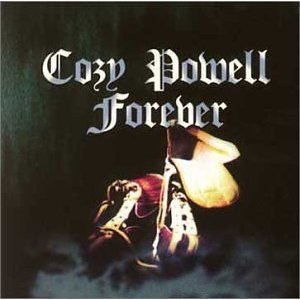 Sly was a Japanese heavy metal supergroup formed in 1994 by former members of popular groups of the Japanese metal scene. The line-up included singer Minoru Niihara and drummer Munetaka Higuchi, guitarist Shinichiro Ishihara (Earthshaker) and bassist Koichi Terasawa (Blizard). Sly disbanded in 1998, with Niihara and Higuchi re-joining Loudness in 2000 and Ishihara taking part in the reformation of his former group Earthshaker in 1999. 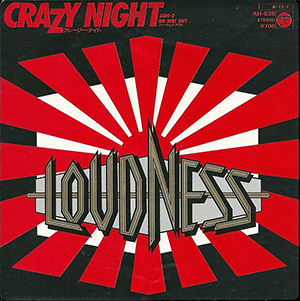 "Crazy Night" is the fourth single by Japanese heavy metal band Loudness, from their 1985 album Thunder in the East. Written by lead vocalist Minoru Niihara and guitarist Akira Takasaki and produced by Max Norman, the single was released by Nippon Columbia on December 1, 1984 in Japan and by Atco Records on November 1, 1985. The song was the band's big break in the American metal scene and has since become their signature song.