These are the 9 castelli (municipalities) of San Marino :

Though it is one of the biggest towns of the Republic, Dogana is not an autonomous castello but belongs to the castello of Serravalle. Like Italian comuni, the castelli of San Marino include a main town that is the seat of the castello, called the capoluogo, and other settlements known as frazioni or curazie.

Castello may refer to:

San Marino is located in Southern Europe, an enclave (landlocked) in central Italy, which it borders for 39 km. The third smallest independent state by area in Europe after the Vatican City and Monaco, San Marino is dominated by the Apennines. Located at 43.94°N 12.46°E, it covers an area of 61.2 km2 (23.6 sq mi). Completely mountainous, only 17% of its territory is arable. Several rivers flow through the country, the largest being the Ausa, the Marano, and the San Marino River.

The City of San Marino (Italian: Città di San Marino) is the capital city of the Republic of San Marino, Southern Europe. The city has a population of 4,044. It is on the western slopes of San Marino's highest point, Monte Titano. 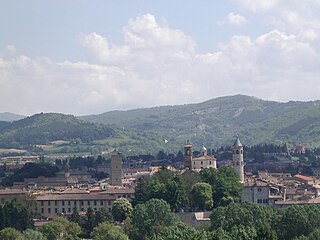 Città di Castello is a city and comune in the province of Perugia, in the northern part of Umbria. It is situated on a slope of the Apennines, on the flood plain along the upper part of the river Tiber. The city is 56 km (35 mi) north of Perugia and 104 km (65 mi) south of Cesena on the motorway SS 3 bis. It is connected by the SS 73 with Arezzo and the A1 highway, situated 38 km (23 mi) west. The comune of Città di Castello has an exclave named Monte Ruperto within Marche. 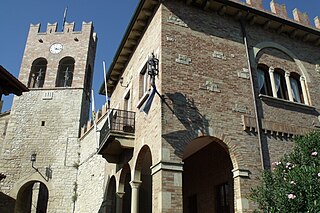 Serravalle is a castello located in the European republic of San Marino. With a population of 10,878 inhabitants and a surface of 10.53 km2, it is not only the most densely populated municipality in San Marino, but it also contains its largest settlement (Dogana). Serravalle is located on the edge of the Apennine Mountains. 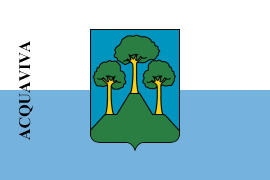 Fiorentino is one of the 9 communes or castelli of the Republic of San Marino. It has 2,548 inhabitants in an area of 6.57 km2. 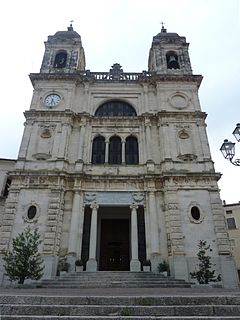 San Valentino in Abruzzo Citeriore is a mountain hill town in the province of Pescara, part of the Abruzzo region in central Italy.

Dogana is a town and a civil parish (curazia), whose name means "Customs House"; it is located in the north-eastern corner of San Marino in the Serravalle municipality ("castello"). The town is the most populated settlement in the republic.

The Visconti Castle of Somma Lombardo is a medieval castle-palace in Somma Lombardo, Province of Varese, Lombardy, northern Italy.

The Castello di Bereguardo is a medieval castle located on Via Castello 2 in the town of Bereguardo, Province of Pavia, region of Lombardy, Italy.

The 2009 Sammarinese local elections were held on 7 June to elect the mayors and the councils of the nine municipalities of San Marino. Overall turnout was 55.1%. The election in the City of San Marino was declared invalid, as it didn't reach the turnout quorum. Therefore, a second election was held on 29 November.

The 1999 Sammarinese local elections were held on 13 June to elect the mayors and the councils of Chiesanuova, the City of San Marino and Domagnano, in San Marino. Overall turnout was 66.1%.

The Visconti Castle of Massino is a medieval castle located on the Vergante hills in the municipality of Massino Visconti, Province of Novara, Piedmont, northern Italy. Since the 12th century it has been a possession and one of the preferred residences of the Visconti of Milan. At that time it was frequented by the family ancestor of the lords and dukes of Milan. Afterwards its property was transferred to other collateral branches of the lineage, from the initial Visconti di Massino to the current Visconti di San Vito.

The Visconti Castle of Jerago is a castle of Middle Age origin located in Jerago, Lombardy, Northern Italy. Having been a property of members of the Visconti house between the 13th and 18th centuries, it retains still today their memory in its name.

The Visconti Castle of Vogogna is a medieval stone-made castle in Vogogna, Piedmont, Northern Italy. It was built in the 14th century by the Visconti, lords and dukes of Milan.