Murata Manufacturing is primarily involved in the manufacturing of ceramic passive electronic components, primarily capacitors, and has an overwhelming marketshare worldwide in ceramic filters, high-frequency parts, and sensors.

On August 23, 2014, Murata announced the acquisition of Peregrine Semiconductor Corporation. [6]

On July 28, 2016 a Memorandum of Understanding was signed between Murata and Sony announcing the intent to sell a portion of the latter's battery business (Sony Energy Devices Corporation). [7]

On December 15, 2020, Murata announced the opening of a new research and development center dedicated to automotive applications in Minatomirai, Yokohama, Kanagawa Prefecture. [10]

An integrated circuit or monolithic integrated circuit is a set of electronic circuits on one small flat piece of semiconductor material, usually silicon. Large numbers of tiny MOSFETs integrate into a small chip. This results in circuits that are orders of magnitude smaller, faster, and less expensive than those constructed of discrete electronic components. The IC's mass production capability, reliability, and building-block approach to integrated circuit design has ensured the rapid adoption of standardized ICs in place of designs using discrete transistors. ICs are now used in virtually all electronic equipment and have revolutionized the world of electronics. Computers, mobile phones, and other digital home appliances are now inextricable parts of the structure of modern societies, made possible by the small size and low cost of ICs such as modern computer processors and microcontrollers.

A crystal filter allows some frequencies to 'pass' through an electrical circuit while attenuating undesired frequencies. An electronic filter can use quartz crystals as resonator components of a filter circuit. Quartz crystals are piezoelectric, so their mechanical characteristics can affect electronic circuits. In particular, quartz crystals can exhibit mechanical resonances with a very high Q factor. The crystal's stability and its high Q factor allow crystal filters to have precise center frequencies and steep band-pass characteristics. Typical crystal filter attenuation in the band-pass is approximately 2-3dB. Crystal filters are commonly used in communication devices such as radio receivers. 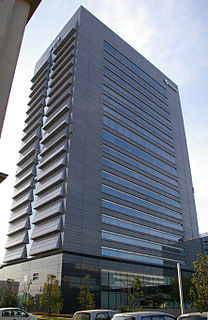 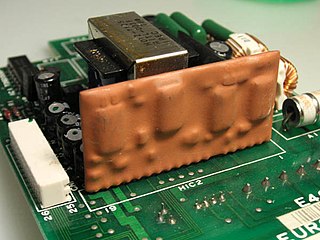 A hybrid integrated circuit (HIC), hybrid microcircuit, hybrid circuit or simply hybrid is a miniaturized electronic circuit constructed of individual devices, such as semiconductor devices and passive components, bonded to a substrate or printed circuit board (PCB). A PCB having components on a Printed Wiring Board (PWB) is not considered a true hybrid circuit according to the definition of MIL-PRF-38534. 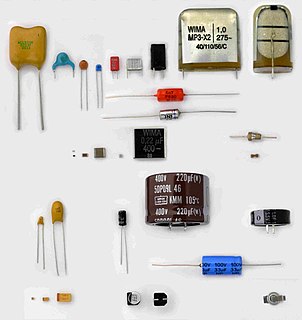 A thin-film bulk acoustic resonator is a device consisting of a piezoelectric material manufactured by thin film methods between two conductive - typically metallic - electrodes and acoustically isolated from the surrounding medium. The operation is based on the piezoelectricity of the piezolayer between the electrodes.

A vacuum variable capacitor is a variable capacitor which uses a high vacuum as the dielectric instead of air or other insulating material. This allows for a higher voltage rating than an air dielectric using a smaller total volume. However, many dielectrics have higher breakdown field strengths than vacuum: 60-170 MV/m for teflon, 470-670 MV/m for fused silica and 2000 MV/m for diamond, compared with 20-40 MV/m for vacuum. There are several different designs in vacuum variables. The most common form is inter-meshed concentric cylinders, which are contained within a glass or ceramic vacuum envelope, similar to an electron tube. A metal bellows is used to maintain a vacuum seal while allowing positional control for the moving parts of the capacitor.

Sony Energy Devices Corporation, is a Japanese multinational company specializing in a variety of areas in the energy industry, and is a wholly owned subsidiary and part of the Devices Group of Sony. The company was established on February, 1975 in Fukushima, Japan.

NXP Semiconductors N.V. is a Dutch semiconductor manufacturer with headquarters in Eindhoven, Netherlands that focuses in the automotive industry. The company employs approximately 31,000 people in more than 35 countries, including 11,200 engineers in 33 countries. NXP reported revenue of $9.4 billion in 2018. 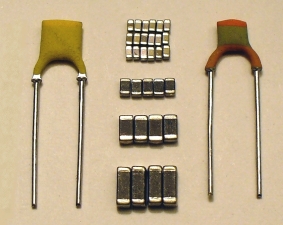 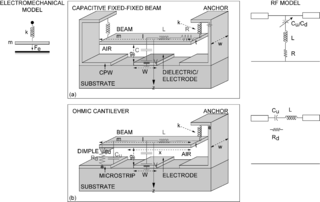 Integrated Passive Devices (IPDs) or Integrated Passive Components (IPCs) or Embedded Passive Components are electronic components where resistors (R), capacitors (C), inductors (L)/coils/chokes, microstriplines, impedance matching elements, baluns or any combinations of them are integrated in the same package or on the same substrate. Sometimes integrated passives can also be called as embedded passives, and still the difference between integrated and embedded passives is technically unclear. In both cases passives are realized in between dielectric layers or on the same substrate.

A mechanical filter is a signal processing filter usually used in place of an electronic filter at radio frequencies. Its purpose is the same as that of a normal electronic filter: to pass a range of signal frequencies, but to block others. The filter acts on mechanical vibrations which are the analogue of the electrical signal. At the input and output of the filter, transducers convert the electrical signal into, and then back from, these mechanical vibrations.

Peregrine Semiconductor, known as pSemi, is a San Diego-based manufacturer of high-performance RF CMOS integrated circuits. A Murata Manufacturing company since December 2014, the company's products are used in aerospace and defense, broadband, industrial, mobile wireless device, test and measurement equipment and wireless infrastructure markets. Their UltraCMOS technology is a proprietary implementation of silicon on sapphire (SOS) and silicon on insulator (SOI) substrates that enables high levels of monolithic integration.

Ronald "Ron" Reedy, Ph.D. is an American businessman, scientist and researcher. In the semiconductor industry, he advanced silicon on sapphire (SOS) and CMOS technology. 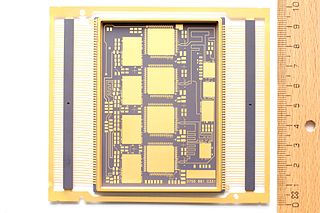 Co-fired ceramic devices are monolithic, ceramic microelectronic devices where the entire ceramic support structure and any conductive, resistive, and dielectric materials are fired in a kiln at the same time. Typical devices include capacitors, inductors, resistors, transformers, and hybrid circuits. The technology is also used for robust assembly and packaging of electronic components multi-layer packaging in the electronics industry, such as military electronics, MEMS, microprocessor and RF applications.