On June 20, 2006 the 21-year-old student nurse Frauke Liebs disappeared under mysterious circumstances. [1] The last known sighting of her was at a pub in Paderborn's city center, where she and a friend watched the FIFA World Cup match between England and Sweden. [2] While Liebs was still at the pub, she borrowed a friend's mobile phone battery, as the battery on her own phone had been drained. She later returned her friend's battery before leaving the pub at around 11 p.m. Since she probably had no more than five euros with her, she is believed to have been heading home on foot. The pub was about 1.5 kilometers away from her home.

At 12:49 a.m., her housemate received a text message from Lieb's mobile phone, saying that she would be home later. [2] However, she did not return home that night, and when she also failed to appear at work the day after, her mother reported her missing. The police discovered that the text message had been sent from Nieheim, a small city about 35 km north-east of Paderborn.

In the following days, Liebs called her housemate five times via her mobile phone. Police were able to locate the calls, which all came from different industrial areas in Paderborn. During these calls, Liebs continued to say that she would return home soon, but did not communicate any information about her situation. She provided only vague or evasive answers to questions. Frauke Liebs' last phone call was on June 27 in the presence of her sister, who also talked to her. During this conversation, Frauke is said to have answered the question of whether she was being held captive with a faint "yes", immediately followed by a loud "no". Contact broke off after this phone call.[ citation needed ]

Frauke Liebs' skeletonized body was found by a hunter on October 4, 2006 in a forested area next to a Landesstraße ("state road") near Lichtenau. [1] [2] The body was found with the clothes she was wearing on the day of her disappearance. Her mobile phone, handbag, wallet and wrist watch were not found. [1] [2] Due to the advanced state of decomposition, the time and cause of Liebs' death could not be determined.

A case analysis by the police came to the conclusion that Liebs was probably held captive in the area around Nieheim and that the phone calls from Paderborn may have been diversionary maneuvers. No motive for the crime has been determined. Over 900 people who were connected to the victim were questioned by the police, and the initial investigation produced a list of five initial suspects. All five were eventually cleared after producing alibis. [2]

The case aroused nationwide interest and was among others presented on the popular television show Aktenzeichen XY … ungelöst ("Case number XY … Unsolved").

Unsolved Mysteries is an American television series, created by John Cosgrove and Terry Dunn Meurer. Documenting cold cases and paranormal phenomena, it began as a series of seven specials, presented by Raymond Burr, Karl Malden, and Robert Stack, beginning on NBC on January 20, 1987, becoming a full-fledged series on October 5, 1988, hosted by Stack. After nine seasons on NBC, the series moved to CBS for its 10th season on November 13, 1997. After adding Virginia Madsen as a co-host during season 11 failed to boost slipping ratings, CBS canceled the series after only a two-season, 12-episode run on June 11, 1999. The series was revived by Lifetime in 2000, with season 12 beginning on July 2, 2001. Unsolved Mysteries aired 103 episodes on Lifetime, before ending on September 20, 2002, an end that coincided with Stack's illness and eventual death.

Crimewatch is a television programme produced by the National Crime Prevention Council, Singapore and Singapore Police Force. Currently presented by serving regular police officers, it showcases the work of the Singapore Police Force including solved cases, appeals for unsolved cases, as well as crime prevention advice. It is based on the German programme Aktenzeichen XY... ungelöst, or "File XY... Unsolved".

Aktenzeichen XY ... ungelöst is an interactive German television programme first broadcast on 20 October 1967 on ZDF. Created by Eduard Zimmermann, it aims to combat and solve crimes. The programme is currently presented by Rudi Cerne. It airs monthly, with 12 episodes in a year, on Wednesday at 8:15 PM.

Intensity is a 1997 made-for-TV psychological thriller mini-series based on the novel of the same name by Dean Koontz, starring John C. McGinley, Molly Parker, Piper Laurie, and Tori Paul. It originally aired in the United States on the Fox Network. 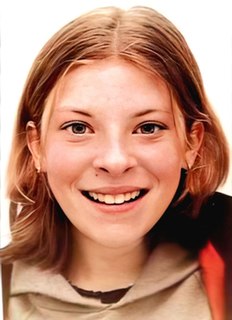 On 21 March 2002, Amanda Jane"Milly"Dowler, a 13-year-old English schoolgirl, was reported missing by her parents after failing to return home from school and not being seen since walking along Station Avenue in Walton-on-Thames, Surrey, that afternoon. Following an extensive search for her, her remains were discovered in Yateley Heath Woods in Yateley, Hampshire, on 18 September.

Crimecall is a television show broadcast once monthly on RTÉ. It is co-produced in Dublin, Ireland by Green Ink Ltd and 360 Production South Ltd. Since January 2018, the show is presented by Sharon Ní Bheoláin. It is a second RTÉ adaptation of German crime programme Aktenzeichen XY … ungelöst, and its format matches that of its British derivative Crimewatch and re-enacts unsolved crimes.

Norbert Hans Poehlke, the Hammer-Killer, was a German police officer who after he committed suicide in 1985 was found to have committed several bank robberies and related murders. He was tagged as the "Hammer-Killer" for his modus operandi of killing drivers of cars and using a sledgehammer in later bank robberies in which he would use his victims' cars as getaway vehicles.

Crimewatch was a British television programme produced by the BBC, that reconstructs major unsolved crimes in order to gain information from the public which may assist in solving the case. The programme was originally broadcast once a month on BBC One, although in the final years before axing it was usually broadcast roughly once every two months.

Mascha Müller is a German actress and best known for her role as Luise von Waldensteyck on the soap opera Verbotene Liebe .

The YOGTZE case refers to the death of unemployed German food engineer Günther Stoll, which occurred on 26 October 1984.

Funda Vanroy is a German presenter and actress.

Kurt-Friedhelm Steinwegs, nicknamed "The Monster from Lower Rhine", is a German serial killer who murdered six people between 1974 and 1983.

Norman Volker Franz is a German murderer and fugitive who is being sought after by international arrest warrant.

Leo Egidius Schiffer was a German serial killer, who was known as the "Strangler of Aachen". Between 1983 and 1990, he murdered five girls and women between the ages of 15 to 31, abusing three of them sexually. His crimes were known as "hitchhiker killings" or "Disco-murders". In 1985, the program Aktenzeichen XY … ungelöst covered his case.

The Göhrde murders in the Göhrde State Forest in Lower Saxony were two double murders, which in the summer of 1989 caused a sensation throughout Western Germany and today are regarded as spectacular criminal cases. Within a few weeks, two couples in the same forest area of the Göhrde were murdered probably by the same perpetrator. The second double murder took place, while the Kriminalpolizei only a few hundred meters away secured traces of the first crime. The forest area was then avoided for a long time by walkers and excursionists for almost 30 years, and the cases remain unexplained.

Laureen Ann Rahn is an American teenager who vanished under mysterious circumstances from her home in Manchester, New Hampshire. On the night of her disappearance, Rahn was accompanied by a male and female friend at the apartment she shared with her mother, Judith, who was out on a date with her boyfriend.

Kurt-Werner Wichmann was a German serial killer, who was responsible for the Göhrde Murders.

The Saw-Killer of Hanover is the name of an unidentified German serial killer, who's supposedly responsible for murdering and dismembering at least four women and two men, whose body parts were found in Hanover and the surrounding area in the 1970s. None of the victims have been identified, and the case is also referred to as The Found Corpses of Hanover. The "SOKO Torso" Unit of the Hanoverian police, directed by Commissioner Günter Nowatius, investigated the murders at the time.

The kidnapping of Ursula Herrmann took place in 1981 in the Federal Republic of Germany. The 10-year-old girl disappeared on Tuesday, 15 September, 1981, between her cousin's house and her home, a ten-minute ride on her bicycle. Herrmann's disappearance triggered an immediate search which yielded nothing. After two days, cryptic calls were made to her home, consisting only of a radio jingle. After three days a ransom note arrived, apparently later than the kidnappers had intended, demanding DM 2 million, and explaining that the jingle was meant to elicit a yes-or-no response concerning payment of the ransom. On the next call, Ursula's mother affirmed that the ransom would be paid, but received no communication from the kidnappers. Instead, a letter arrived on Monday, September 21, with ransom payment instructions for an unstated location. The ransom sum was raised, but no further instructions arrived.