The Musan mine is a large iron mine located in north-east North Korea in North Hamgyong Province. Musan represents one of the largest iron ore reserves in North Korea and in the world having estimated reserves of 3 billion tonnes of ore grading 41% iron metal. [1]

Industrial-level mining operations began in 1935 during the Japanese occupation of Korea and was carried out by the Mitsubishi Mining Co. [2] From 1940-45, the mine produced a combined 3,838,454 tonnes of ore concentrate at an average iron concentration of 58% elemental iron. The Korean War brought mining operations to a halt but by 1989, national iron ore production had risen to 9.8 million tonnes, with Musan producing upwards of two-thirds of the total. [2] The mining industry once again collapsed as a result of the fall of the Soviet Union and the 1994-99 North Korean famine. Production levels at Musan have yet to rebound to pre-famine highs.

Codelco is a Chilean state owned copper mining company. It was formed in 1976 from foreign-owned copper companies that were nationalised in 1971. 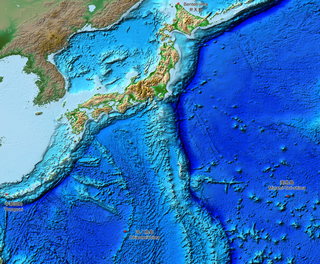 Mining in Japan is minimal because Japan does not possess many on-shore mineral resources. Many of the on-shore minerals have already been mined to the point that it has become less expensive to import minerals. There are small deposits of coal, oil, iron and minerals in the Japanese archipelago. Japan is scarce in critical natural resources and has been heavily dependent on imported energy and raw materials. There are major deep sea mineral resources in the seabed of Japan. This is not mined yet due to technological obstacles for deep sea mining. 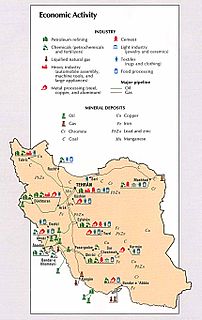 Resources are classified as either biotic or abiotic on the basis of their origin. The Indian landmass contains a multitude of both types of resource and its economy, especially in rural areas, is heavily dependent on their consumption or export. Due to overconsumption, they are rapidly being depleted.

The Telfer Mine is a gold, copper and silver mine located at Telfer on the land of the Martu people, in the Great Sandy Desert of Western Australia. It is owned by Newcrest Mining, "the largest gold producer listed on the Australian Securities Exchange." 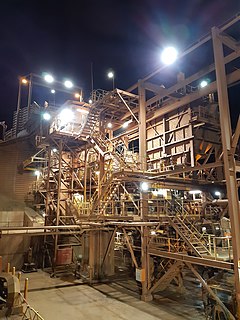 The Brockman 2 mine is an iron ore mine located in the Pilbara region of Western Australia, 60 kilometres north-west of Tom Price. It should not be confused with Rio Tinto's Brockman 4 mine, also in the area.

The Nammuldi mine is an iron ore mine located in the Pilbara region of Western Australia, 60 kilometres north-west of Tom Price.

The Mesa J mine is an iron ore mine located in the Pilbara region of Western Australia, 16 kilometres south-west of Pannawonica.

The West Angelas mine is an iron ore mine located in the Pilbara region of Western Australia, 110 kilometres North West of Newman.

The Hope Downs mine is an iron ore mining complex located in the Pilbara region of Western Australia. It comprises four large open-pit mines. The mines are co-owned by the Hancock Group and Rio Tinto, and the complex was named after Hope Hancock. 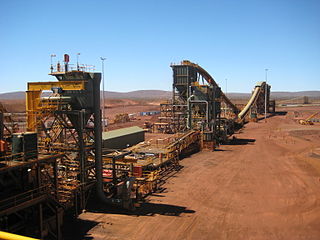 The Brockman 4 mine is an iron ore mine located in the Pilbara region of Western Australia, 60 kilometres (37 mi) north-west of Tom Price. The mine, located near the existing Brockman mine, was opened in 2010. The mine is fully owned and operated by Rio Tinto Iron Ore, which owns many mines in the area. The mine is serviced by the Boolgeeda Airport.

The world's largest producer of uranium is Kazakhstan, which in 2019 produced 43% of the world's mining output. Canada was the next largest producer with a 13% share, followed by Australia with 12%. Uranium has been mined in every continent except Antarctica.

Zinc mining is the process by which mineral forms of the metal zinc are extracted from the earth through mining. A zinc mine is a mine that produces zinc minerals in ore as its primary product. Common co-products in zinc ores include minerals of lead and silver. Other mines may produce zinc minerals as a by-product of the production of ores containing more valuable minerals or metals, such as gold, silver or copper. Mined ore is processed, usually on site, to produce one or more metal-rich concentrates, then transported to a zinc smelter for production of zinc metal. 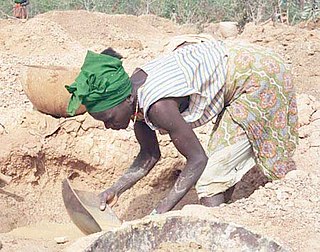 The mining industry of Guinea was developed during colonial rule. The minerals extracted consisted of iron, gold, diamond, and bauxite. Guinea ranks first in the world in bauxite reserves and 6th in the extraction of high-grade bauxite, the aluminium ore. The mining industry and exports of mining products accounted for 17% of Guinea’s gross domestic product (GDP) in 2010. Mining accounts for over 50% of its exports. The country accounts for 94% of Africa’s mining production of bauxite. The large mineral reserve, which has mostly remained untapped, is of immense interest for international firms.