The Museum of World Cultures (German : Museum der Weltkulturen) is an ethnological museum in Frankfurt, Germany. Until 2001 it was called the Museum of Ethnology (Museum für Völkerkunde).

It was founded in 1904, as a civic institution, to bring together the ethnographic collections of the city of Frankfurt. In 1908 the museum moved into the Palais Thurn und Taxis in the city centre. In 1925 the city acquired the collections of the Institute of Cultural Morphology (today the Frobenius Institute), founded by the ethnologist Leo Frobenius. He relocated to Frankfurt along with the institute and become an honorary professor of the University of Frankfurt. In 1934 he became the director of the museum. The roles of museum director and institute director continued to be occupied by the same person (including Frobenius's successors) until 1966, when the university became state-run, since when the museum has again been run by the city.

Significant parts of the collection were lost when the Palais was destroyed by bombs in World War II. However, some items had already been evacuated from the Palais – these survived the war, and in 1973 they were put on display in an old villa on the banks of the Main, where they have been ever since. The Museum of World Cultures therefore counts as one of the earliest museums on what is now the Museumsufer.

The museum has expanded since 1973 and now occupies three adjacent buildings on the Schaumainkai – nos. 29 (the main building), 35 (the original villa), and 37 ("Gallery 37"), which were acquired and/or rebuilt in the 1980s. The collections include over 65,000 objects from Oceania, Australia, Southeast Asia, the Americas, Africa and Europe. [1] Gallery 37 hosts exhibitions of contemporary works by Indian, African, Oceanian and Indonesian artists.

In 2010, plans were announced for a new phase of construction to further expand the museum. [2]

The directors of the Museum der Weltkulturen are: 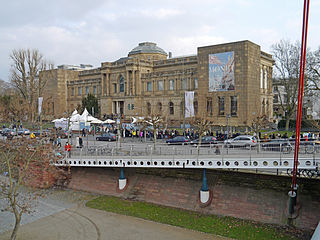 The Frobenius Institute is Germany's oldest anthropological research institute. Founded in 1925, it is named after Leo Frobenius. The institution is located at Gruneburgplatz 1 in Frankfurt am Main. An autonomous organization, it is associated with the Johann Wolfgang Goethe University, and works in collaboration with two other organizations, the Institut für Ethnologie, and the Museum der Weltkulturen. It carries out ethnological and historical research. Originally established in Munich and known as the Forschungsinstitut fur Kulturmorphologie, it was renamed by Adolf Ellegard Jensen, its director after the 1938 death of Frobenius. 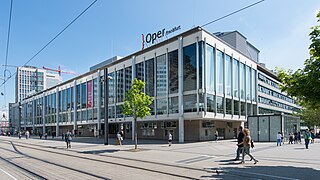 The Oper Frankfurt is one of the leading opera companies in Europe, and voted best "Opera house of the year" several times since 1996, including 2020. Opera in Frankfurt am Main has a long tradition, with many world premieres such as Franz Schreker's Der ferne Klang in 1912, Fennimore und Gerda by Frederick Delius in 1919, and Carl Orff's Carmina Burana in 1937. Frankfurt's international recognition began in the Gielen Era, 1977 to 1987, when Michael Gielen and stage directors such as Ruth Berghaus collaborated.

Museumsufer is the name of a landscape of museums in Frankfurt, Hesse, Germany, lined up on both banks of the river Main or in close vicinity. The centre is the historic art museum Städel. The other museums were added, partly by transforming historic villas, partly by building new museums, in the 1980s by cultural politician Hilmar Hoffmann.

The Deutsches Filminstitut - DIF is an institute for the study of film, based in Frankfurt am Main, Germany. 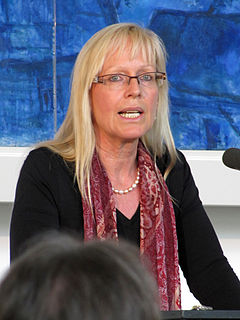 The Palais Thurn und Taxis in Frankfurt, Germany was built from 1731 to 1739 by Robert de Cotte and commissioned by the Imperial Postmaster, Prince Anselm Franz von Thurn und Taxis (1714–1739).

The Museum Giersch is an art gallery on the Main River in Frankfurt am Main, Germany, in the Museumsufer area. 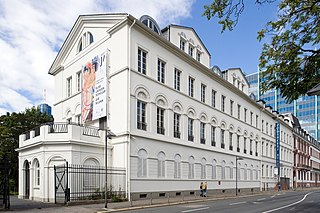 The Jewish Museum Frankfurt am Main is the oldest independent Jewish Museum in Germany. It was opened by Federal Chancellor Helmut Kohl on 9 November 1988, the 50th anniversary of Kristallnacht.

Ernst Hilger a curator as well as the owner and founder of Hilger modern/contemporary and Hilger BrotKunsthalle.

The following is a timeline of the history of the city of Frankfurt am Main, Germany. 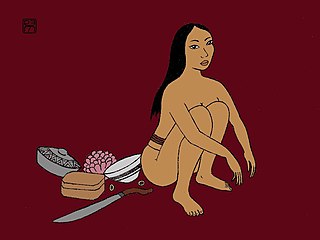 Adolf Ellegard Jensen was one of the most important German ethnologists of the first half of the 20th century.

Alf Bayrle, was a German painter, printmaker and sculptor

Karin Hahn-Hissink was a German anthropologist whose research on the mythology of peoples living in the eastern lowlands of Bolivia is considered an important contribution to the field. For a quarter of a century, she was a curator at the Frankfurt Ethnological Museum, and she also worked at the Frobenius Institute.

Helmut Petri was a German anthropologist.

The Ninth German Inner Africa Research Expedition was led by Leo Frobenius to Southern Africa between August 1928 and March 1930. It visited modern-day South Africa, Zimbabwe, Botswana, Lesotho, Mozambique, Namibia and Zambia. It recorded a large quantity of indigenous rock art, which helped Frobenius to build one of the most important collections of such work, some of which was sold to South African museums. It also investigated ancient ore mines and provided samples for some of the first metallographic and chemical analysis of southern African indigenous metals.