In 1021, Kunhsaw was overthrown and forced to become a monk by his adopted sons Kyiso and Sokkate. [2] Myauk Pyinthe and Min Saw also moved next to the monastery where the deposed king lived on as a monk. The arrangement last until 1044 when Sokkate, who had become king since 1044, forcibly raised Myauk Pyinthe, his maternal aunt, as his queen. [4] It angered Min Saw, who promptly revolted against his cousin. Min Saw slayed Sokkate on 11 August 1044 in single combat on horseback, and seized the throne. [note 1] Chronicles say that the queen dedicated two temples named Pottalin and Yin-Wut-Kyut, after hearing the news of her son's victory over Sokkate. [5] [6] 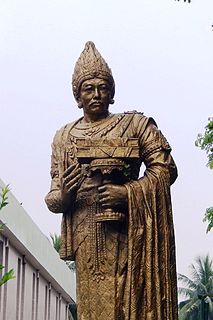 Kyiso was king of Pagan dynasty from 1021 to 1038. According to the Burmese chronicles, Kyiso was a son of King Nyaung-u Sawrahan but raised by King Kunhsaw Kyaunghpyu. Kunhsaw married Nyuang-u's three chief queens, two of whom were pregnant and subsequently gave birth to Kyiso and Sokkate. Sokkate and Kyiso were raised by Kunhsaw as his own sons. When the two sons reached manhood, they forced Kunhsaw to abdicate the throne and become a monk.

Thiri Thihathura Shwetaungtet was king of Sagaing from 1335/36 to 1339. He came to power by deposing his father Tarabya. He was assassinated three years later by the loyalists of his father.

Nawrahta Minye was king of Sagaing for seven months in 1349. He reversed his predecessor Kyaswa's policy of peace with Sagaing's cross-river rival Pinya although no war broke out. He was succeeded by his younger brother Tarabya II.

Taung Pyinthe was the Chief queen consort of kings Saw Rahan II and Kunhsaw Kyaunghpyu of the Pagan Dynasty of Myanmar. She was also the mother of King Kyiso.

Ale Pyinthe was a queen consort of kings Saw Rahan II and Kunhsaw Kyaunghpyu of the Pagan Dynasty of Myanmar. She was also the mother of King Sokkate.

Myauk Pyinthe was a queen consort of King Narathu of the Pagan Dynasty of Myanmar (Burma).

Myauk Pyinthe was the second Queen of the Northern Palace of King Sithu II of the Pagan Dynasty of Myanmar (Burma). 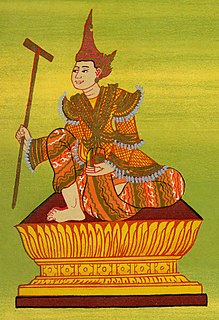