Born in Victoria, British Columbia to an upper-class family, her first interests in fine art came after meeting with Emily Carr on Vancouver Island who later gave a brief series of instruction to Pavelic. Aside from a few months of study with a Yugoslav artist, she was self-taught as a painter. [1] She studied at Miss Edgar's and Miss Cramp's School in Montreal, Canada as a boarder. [2] [3] During the Second World War, she held a one-person exhibition of portraits in Canada and donated the proceeds to the Red Cross. She later married a diplomat and had one daughter who suffered a disability.

Pavelic lived a life of privilege and as an adult. Her childhood home was later donated to the City of Victoria and converted into the first art gallery.

In 1997 she became a founding member of the Canadian Portrait Academy (CPA) and in 1998 won the F.H. Varley Medallion for Best Portrait Painting for her portrait of Pierre Elliott Trudeau. She was made a member of the Royal Canadian Academy of Arts. [7] 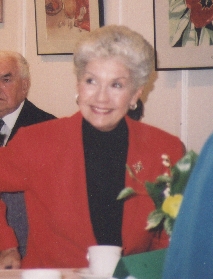 Iona Victoria Campagnolo, is a Canadian politician, and was the 27th Lieutenant Governor of British Columbia and the first woman to hold the office. Prior to becoming Lieutenant Governor she was a Cabinet member in the Liberal government of Prime Minister Pierre Trudeau. 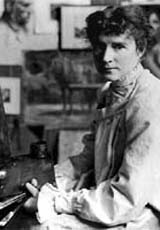 Sophia Theresa "Sophie" Pemberton or Sophie Pemberton Deane-Drummond was a Canadian painter. Despite the social limitations placed on female artists at the time, she made a noteworthy contribution to Canadian art and, in 1899, was the first Canadian woman to win the Prix Julian from the Académie Julian for her portraiture. She was a near contemporary of Emily Carr, and the two artists spent much of their lives in the same small city.

The Art Gallery of Greater Victoria (AGGV) is an art museum located in Victoria, British Columbia, Canada. Situated in Rockland, Victoria, the museum occupies a 2,474.5 square metres (26,635 sq ft) building complex; made up of the Spencer Mansion, and the Exhibition Galleries. The former building component was built in 1889, while the latter component was erected in the mid-20th century.

Takao Tanabe, is a Canadian artist who painted abstractly for decades, but over time, his paintings became nature-based.

Katharine Emma Maltwood was a writer and artist on the esoteric and occult. Throughout her childhood, she was reared to be an artist. Her parents were progressive, and they pushed each of their children equally to achieve their potential. In her formative years of art education, her artistic inclinations drew her into the fashionable Arts and Crafts Movement. Maltwood matriculated at the Slade School of Fine Art, University College, London (1896–97). Here, she studied sculpture. 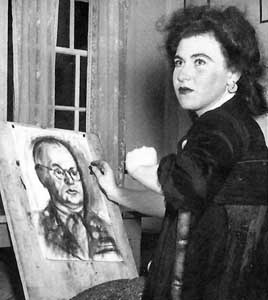 Unity Bainbridge was a Canadian artist and writer of poetry inspired by the indigenous peoples of the Pacific Northwest Coast and its landscape.

Samuel Maclure was a Canadian architect in British Columbia, Canada, from 1890 to 1920. He was born on 11 April 1860 in Sapperton, New Westminster, British Columbia, to John and Martha Maclure. He studied painting at the Spring Garden Institute in Philadelphia from 1884 to 1885, and he was a self-taught architect. He married Margaret Catherine (Daisy) Simpson, an accomplished pianist and portrait painter, on 10 August 1889.

Kate Craig was a pioneering Canadian video and performance artist. She was a founding member of the artist-run centre the Western Front, where she supported the video and performance works of many artists while producing her own body of work. She is known for her performances such as "Lady Brute," and for her video works.

Marianna Schmidt was a Hungarian-Canadian artist who worked primarily as a printmaker and painter.

Ann Kipling is a Canadian artist who creates impressionistic portraits and landscapes on paper from direct observation. Kipling's distinctive style of overlapping, temporally suggestive linework is formed through her working process, which involves drawing her subject over time, recording subtle shifts in movement in the sitter or landscape during that period. Her work is characterized by a flat sense of space, where lines are used to frame a vibrating and gestural idea of her subject, rather than a direct representation of form. While not directly connected to any art movement in particular, connections can be made to Chinese landscape painters and the watercolours of Paul Cézanne. Using colour minimally, her primary media is etching, drawing, watercolours, pen, pencil, pastels and pencil crayons. She lives and works in Falkland, BC, a location which serves as a focus for her recent landscapes.

Luis Merino is a Mexican/Canadian painter. His work can be found in numerous public and private collections in Canada, Mexico, and the United States. Some of his most notable work is on display in the Maltwood Art Museum and Gallery, at the University of Victoria in Greater Victoria, British Columbia, Canada.

Myfanwy MacLeod is a Canadian artist who lives, and works, in Vancouver, British Columbia. She has exhibited work in Canada, the United States of America, and Europe. MacLeod received an award from La Fondation André Piolat (1995), and a VIVA award from the Doris and Jack Shadbolt Foundation (1999). She has work in public, and private collections, including at the National Art Gallery of Canada, and the Vancouver Art Gallery.

Elizabeth MacKenzie is a Canadian artist based in Vancouver known for her drawing, installation and video since the early eighties. MacKenzie uses drawing to explore the productive aspects of uncertainty through the use of repetition, interrogations of portraiture and considerations of intersubjective experience. Her work has been characterized by an interest in maternal ambivalence, monstrous bodies, interrogations of portraiture and considerations of the complexity of familial and other interpersonal relations. 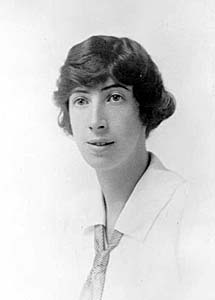 Ina D .D. Uhthoff was a Scottish-Canadian painter. A contemporary of Emily Carr, Uhthoff was known for establishing her own art school; the Victoria School of Art, writing columns for the Daily Colonist newspaper, and exhibiting her own art.

Judith Lodge is an American Canadian painter and photographer who often explores how the two mediums play off of and inform one another. Her abstract portraits of memories, situations, events, and people are inspired by the unconscious, dreams, journals, and nature. She has worked in Vancouver, Victoria, Toronto, Banff, Minnesota, and New York, where she has lived for more than thirty years.

Irene Stella Rolph Langdale was an English and Canadian artist. She was commonly referred to as Stella Langdale.

W. P. Weston, also known as William Percival (Percy) Weston, was a painter and printmaker, best known for his landscapes of British Columbia, and as a teacher.