Myrtaceae, the myrtle family, is a family of dicotyledonous plants placed within the order Myrtales. Myrtle, pōhutukawa, bay rum tree, clove, guava, acca (feijoa), allspice, and eucalyptus are some notable members of this group. All species are woody, contain essential oils, and have flower parts in multiples of four or five. The leaves are evergreen, alternate to mostly opposite, simple, and usually entire (i.e., without a toothed margin). The flowers have a base number of five petals, though in several genera, the petals are minute or absent. The stamens are usually very conspicuous, brightly coloured, and numerous.

Scientists hypothesize that the family Myrtaceae arose between 60 and 56 million years ago (Mya) during the Paleocene era. Pollen fossils have been sourced to the ancient supercontinent Gondwana. [2] The breakup of Gondwana during the Cretaceous period (145 to 66 Mya) geographically isolated disjunct taxa and allowed for rapid speciation; in particular, genera once considered members of the now-defunct Leptospermoideae alliance are now isolated within Oceania. [3] Generally, experts agree that vicariance is responsible for the differentiation of Myrtaceae taxa, except in the cases of Leptospermum species now located on New Zealand and New Caledonia, islands which may have been submerged at the time of late Eocene differentiation. [2]

Recent estimates suggest the Myrtaceae include about 5,950 species in about 132 genera. [4] [5] The family has a wide distribution in tropical and warm-temperate regions of the world, and is common in many of the world's biodiversity hotspots. Genera with capsular fruits such as Eucalyptus , Corymbia , Angophora , Leptospermum , and Melaleuca are absent from the Americas, apart from Metrosideros in Chile and Argentina. Genera with fleshy fruits have their greatest concentrations in eastern Australia and Malesia (the Australasian realm) and the Neotropics. Eucalyptus is a dominant, nearly ubiquitous genus in the more mesic parts of Australia and extends north sporadically to the Philippines. Eucalyptus regnans is the tallest flowering plant in the world. Other important Australian genera are Callistemon (bottlebrushes), Syzygium , and Melaleuca (paperbarks). Species of the genus Osbornia , native to Australasia, are mangroves. Eugenia , Myrcia , and Calyptranthes are among the larger genera in the neotropics.

Historically, the Myrtaceae were divided into two subfamilies. Subfamily Myrtoideae (about 75 genera) was recognized as having fleshy fruits and opposite, entire leaves. Most genera in this subfamily have one of three easily recognized types of embryos. The genera of Myrtoideae can be very difficult to distinguish in the absence of mature fruits. Myrtoideae are found worldwide in subtropical and tropical regions, with centers of diversity in the Neotropics, northeastern Australia, and Malesia. In contrast, subfamily Leptospermoideae (about 80 genera) was recognized as having dry, dehiscent fruits (capsules) and leaves arranged spirally or alternate. The Leptospermoideae are found mostly in Australasia, with a centre of diversity in Australia. Many genera in Western Australia have greatly reduced leaves and flowers typical of more xeric habitats.

The division of the Myrtaceae into Leptospermoideae and Myrtoideae was challenged by a number of authors, including Johnson and Briggs (1984), who identified 14 tribes or clades within Myrtaceae, and found Myrtoideae to be polyphyletic. [6] Molecular studies by several groups of authors, as of 2008, have confirmed the baccate (fleshy) fruits evolved twice from capsular fruits and, as such, the two-subfamily classification does not accurately portray the phylogenetic history of the family. Thus, many workers are now using a recent analysis by Wilson et al. (2001) as a starting point for further analyses of the family. This study pronounced both Leptospermoideae and Myrtoideae invalid, but retained several smaller suballiances shown to be monophyletic through matK analysis. [7]

The genera Heteropyxis and Psiloxylon have been separated as separate families by many authors in the past as Heteropyxidaceae and Psiloxylaceae. [8] [6] However, Wilson et al. [7] included them in Myrtaceae. These two genera are presently believed to be the earliest arising and surviving lineages of Myrtaceae.

The most recent classification recognizes 17 tribes and two subfamilies, Myrtoideae and Psiloxyloideae, based on a phylogenetic analysis of plastid DNA. [9]

Myrtaceae is foraged by many stingless bees, especially by species such as Melipona bicolor which gather pollen from this plant family. Some Australian species such as Tetragonula hockingsi And Tetragonula carbonaria are also known to collect resin from the mature seed pods of Corymbia torelliana , resulting in Mellitochory as the seeds get stuck onto the corbiculae of the bees and sometimes be successfully disposed of by colony members that remove them. But usually, they are known to get stuck in the hives or near hive entrances instead in most cases hence also making it a minor nuisance for some keepers as they can take up a lot of space. Fortunately, this is only known to occur in the eastern areas of Australia , but could occur in other neighbouring countries where some Corymbia species are known to be native. [12]

The Myrtales are an order of flowering plants placed as a sister to the eurosids II clade as of the publishing of the Eucalyptus grandis genome in June 2014.

The Vitaceae are a family of flowering plants, with 14 genera and around 910 known species, including common plants such as grapevines and Virginia creeper. The family name is derived from the genus Vitis.

Corymbia, commonly known as bloodwoods, is a genus of about one hundred species of tree that, along with Eucalyptus, Angophora and several smaller groups, are referred to as eucalypts. Until 1990, corymbias were included in the genus Eucalyptus and there is still considerable disagreement among botanists as to whether separating them is valid. As of January 2020, Corymbia is an accepted name at the Australian Plant Census. 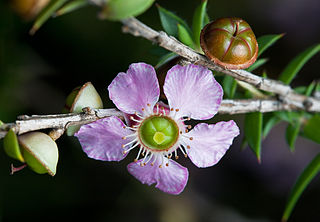 Leptospermum is a genus of shrubs and small trees in the myrtle family Myrtaceae commonly known as tea trees, although this name is sometimes also used for some species of Melaleuca. Most species are endemic to Australia, with the greatest diversity in the south of the continent, but some are native to other parts of the world, including New Zealand and Southeast Asia. Leptospermums all have five conspicuous petals and five groups of stamens which alternate with the petals. There is a single style in the centre of the flower and the fruit is a woody capsule. 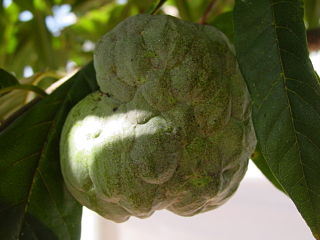 The Annonaceae are a family of flowering plants consisting of trees, shrubs, or rarely lianas commonly known as the custard apple family or soursop family. With 108 accepted genera and about 2400 known species, it is the largest family in the Magnoliales. Several genera produce edible fruit, most notably Annona, Anonidium, Asimina, Rollinia, and Uvaria. Its type genus is Annona. The family is concentrated in the tropics, with few species found in temperate regions. About 900 species are Neotropical, 450 are Afrotropical, and the remaining are Indomalayan.

Metrosideros is a genus of approximately 60 trees, shrubs, and vines mostly found in the Pacific region in the family Myrtaceae. Most of the tree forms are small, but some are exceptionally large, the New Zealand species in particular. The name derives from the Ancient Greek metra or "heartwood" and sideron or "iron". Perhaps the best-known species are the pohutukawa, northern and southern rātā of New Zealand, and ʻōhiʻa lehua, from the Hawaiian Islands.

Psiloxylon mauritianum is a species of flowering plant, the sole species of the genus Psiloxylon. It is endemic to the Mascarene Islands in the Indian Ocean.

Heteropyxis is a genus which includes three species of small evergreen trees. It was previously placed along in family Heteropyxidaceae, but is now placed basally within Myrtaceae. The species of Heteropyxis are native to southern Africa.

Vochysiaceae is a plant family belonging to the order of Myrtales.

Eugenia is a genus of flowering plants in the myrtle family Myrtaceae. It has a worldwide, although highly uneven, distribution in tropical and subtropical regions. The bulk of the approximately 1,100 species occur in the New World tropics, especially in the northern Andes, the Caribbean, and the Atlantic Forest of eastern Brazil. Other centers of diversity include New Caledonia and Madagascar. Many of the species that occur in the Old World have received a new classification into the genus Syzygium.

Beaufortia is a genus of woody shrubs and small trees in the family Myrtaceae and is endemic to Southwest Australia. The genus Beaufortia is closely related to Melaleuca, Calothamnus, Regelia and several others, differing mainly in the way the anthers are attached to the stalks of the stamens, and in the way they open to release their pollen. Beaufortia anthers are attached at one end and open by splitting at the other.

Arillastrum is a monotypic genus of trees in the myrtle family, Myrtaceae, containing the single species Arillastrum gummiferum. It is endemic to southern New Caledonia. It is related to Eucalyptus, but more closely to Angophora and Corymbia. 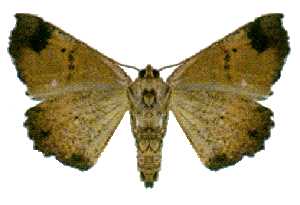 The Nacophorini are one of the smaller tribes of geometer moths in the subfamily Ennominae. They are the most diverse Ennominae of Australia and are widespread in the Americas. If the African genera tentatively placed herein indeed belong here, the distribution of the Nacophorini is distinctly Gondwanan, with their probable origin either of Australia, South America or even Antarctica. In Eurasia, they are rare by comparison.

Leptospermum lanigerum, commonly known as the woolly teatree, is a small tree or medium shrub from the plant family Myrtaceae. Its common name derives from the conspicuously hairy capsules produced as fruit, along with the fine, silky hairs present on branches and leaves. L. lanigerum is widespread in many habitats, particularly in waterlogged areas such as moist, sandy coastal heaths, on river banks, riparian scrub, woodlands and on the fringe of montane grasslands. This species is endemic to Australia, with native populations occurring in New South Wales, South Australia, Tasmania and Victoria. 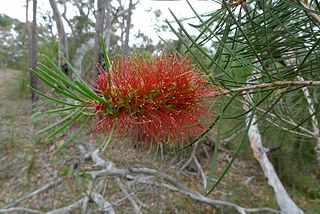 Melaleuca linearis, commonly known as narrow-leaved bottlebrush, is a plant in the myrtle family, Myrtaceae and is endemic to New South Wales and Queensland in Australia. It is a medium-sized shrub with narrow leaves with a rigid point, and red flower spikes in late spring or early summer.

Eucalypteae is a large tribe of flowering plants in the family Myrtaceae; members of this tribe are known as eucalypts. In Australia the genera Angophora, Corymbia, and Eucalyptus are commonly known as gum trees, for the sticky substance that exudes from the trunk of some species. As of 2020, the tribe comprised around 860 species, all native to Southeast Asia and Oceania, with a main diversity center in Australia. 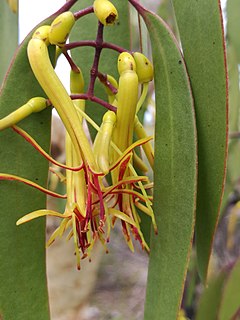 Muellerina eucalyptoides, commonly known as creeping mistletoe, is a hemiparasitic aerial shrub in the family Loranthaceae. The species is endemic to Australia. 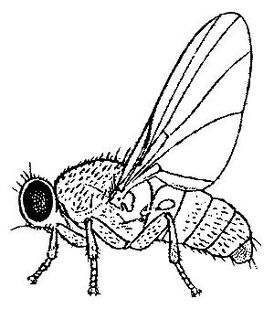 Fergusonina, the sole genus in the family of Fergusoninidae, are gall-forming flies. There are about 40 species in the genus, all of them producing galls on Eucalyptus, Melaleuca, Corymbia, and Metrosideros species in Australia and New Zealand.

Wikimedia Commons has media related to Myrtaceae .
This page is based on this Wikipedia article
Text is available under the CC BY-SA 4.0 license; additional terms may apply.
Images, videos and audio are available under their respective licenses.