In June 2016, JR Central announced plans to build a new prototype "N700S" 16-car trainset (with "S" standing for "Supreme") for evaluating new technology and features on the Tokaido and Sanyo Shinkansen lines from March 2018. [1] Developed from the earlier N700 series design, the new train will incorporate a number of new features. Refinements to the ATC and braking systems will enable shorter braking distances in emergencies such as earthquakes. [1] Optimized underfloor equipment layout will allow the same standard design to be used to easily produce 12, 8 and 6-car trainsets in addition to the Tokaido Shinkansen 16-car trainsets. [1] The optimization is intended to make the train more flexible for possible export. [2] [3] The optimization further allows Toshiba SCiB LTO batteries to be installed so that the train can operate at low speed in the event of a disruption to overhead power. [4] Green cars will use active suspension to further improve ride quality, and ordinary-class cars will have AC power outlets for each seat. [1]

A 16-car prototype set (J0), assembled at the Nippon Sharyo Toyokawa plant, was unveiled at Hamamatsu depot on 10 March 2018. [2] Beginning from 20 March, this set has been used for testing and evaluation. [2] The first full-production J set (J1) was delivered to JR Central in April 2020, with trains entering revenue service on 1 July 2020.

High-speed trials at the design speed of 360 km/h were conducted during 2019 on the Tokaido Shinkansen, reaching 362 km/h. [5] This is 28 km/h faster than the fastest speed ever achieved by the N700A, and may indicate plans to raise the maximum operating speed on the line. [6]

The first N700S sets replaced 700 series trains, and added more rolling stock needed to realize the increased amount of services on the Tokaido Shinkansen planned from 2020. [7] [8] The N700S series is expected to gradually replace N700 series sets on the Sanyo, Tokaido, and Kyushu Shinkansen lines.

The train is also planned to run on the proposed Texas Central Railway high-speed line connecting Dallas and Houston, as well as the Nagasaki Shinkansen. [9] [10]

The J sets were the first to be introduced, and include the pre-series J0 set used for testing between 2018 and 2020.

The 16-car J sets are formed as follows.

The 16-car H sets are formed as follows.

The annual totals for the fleet sizes (number of vehicles as of 1 April each year) are as follows.[ citation needed ] 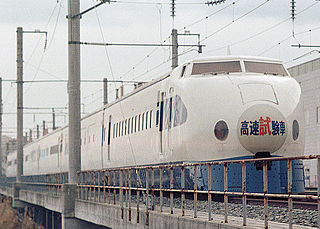 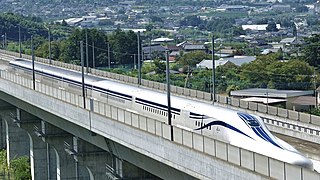 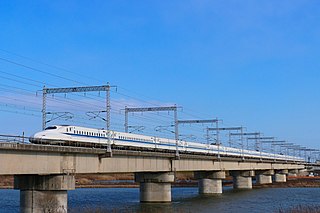 The Class E956 (E956形), branded "ALFA-X", is a ten-car experimental Shinkansen train operated by East Japan Railway Company in Japan to test technology to be incorporated into future trains operating at speeds of up to 360 km/h (220 mph). The name is an acronym for "Advanced Labs for Frontline Activity in rail eXperimentation". The first train was unveiled on May 9, 2019. The Plarail "Ippai Tsunago" Shinkansen Test Train ALFA-X began to be sold on December 26, 2019. Its test run is mainly performed in sections between Sendai and Shin-Aomori of the Tohoku Shinkansen line.