The NCAA Division III Men's Volleyball Tournament is a championship event officially sanctioned by the National Collegiate Athletic Association, the main governing body for U.S. college sports. Open only to schools in Division III of the NCAA, a group of schools that are not allowed to award athletic scholarships, the championship was established in 2012. The tournament would be followed by a single all-divisions championship in women's beach volleyball began in 2016.

The Division III championship began in 2012 with nine teams and has steadily expanded with the growth of D-III men's volleyball. The most recent expansion came for the 2019 season, with the field going from 12 to 14 teams. [2] This differs from the top-level NCAA Men's National Collegiate Volleyball Championship, which involved four teams through the 2013 tournament and expanded to six teams for 2014 and seven for 2018. Like the National Collegiate Championship, the Division III championship is a knockout tournament, with best-of-5-set matches. The current tournament format features six first-round matches, with the winners joining the top two seeds in the quarterfinals. [3]

The National Collegiate Athletic Association (NCAA) is a nonprofit organization that regulates student athletes from 1,268 North American institutions and conferences. It also organizes the athletic programs of many colleges and universities in the United States and Canada, and helps more than 480,000 college student-athletes who compete annually in college sports. The organization is headquartered in Indianapolis, Indiana.

Springfield College is a private college in Springfield, Massachusetts. The institution confers undergraduate and graduate degrees. Known as the birthplace of basketball, the sport was invented there in 1891 by Canadian-American graduate student James Naismith. The college's philosophy of "humanics" "calls for the education of the whole person—in spirit, mind, and body—for leadership in service to others." It is symbolized by a balanced inverted triangle.

The Eastern Intercollegiate Volleyball Association (EIVA) is a college athletic conference whose member schools compete in men's volleyball. Its member institutions are located in the Northeast United States. 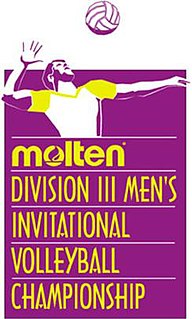 The Tufts Jumbos are the varsity intercollegiate athletic programs of Tufts University, in Medford, Massachusetts. The Jumbos compete in the NCAA Division III National Collegiate Athletic Association (NCAA) and the New England Small College Athletic Conference (NESCAC). Tufts does not offer athletic scholarships. Coed and women's sailing are the only Division I sports at the school.

The Elite 90 Award or more formally The Elite 90 Academic Recognition Award Program, originally the Elite 88 Award and later the Elite 89 Award, is an award by the National Collegiate Athletic Association (NCAA) recognizing the student athlete with the highest cumulative grade-point average who has reached the competition at the finals site for each of the NCAA's 90 men's and women's championships across its three divisions.

The 1995 NCAA Men's Volleyball Tournament was the 26th annual tournament to determine the national champion of NCAA men's collegiate volleyball. The single elimination tournament was played at the Springfield Civic Center in Springfield, Massachusetts during May 1995.