As of 14 July 2020. Note: Flags indicate national team as defined under FIFA eligibility rules. Players may hold more than one non-FIFA nationality.

Nagoya Grampus is a Japanese association football club that plays in the J1 League, following promotion from the J2 League in 2017. Based in Nagoya, Aichi Prefecture and founded as the company team of the Toyota Motor Corp. in 1939. The club shares its home games between Mizuho Athletic Stadium and the much larger Toyota Stadium.

Sagan Tosu is a Japanese professional football club, currently playing in the J1 League. The team is located in Tosu, Saga Prefecture. 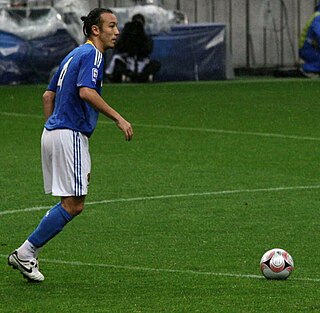 Yutaka Akita is a former Japanese football player and manager. He played for Japan national team.

Toshiya Fujita is a former Japanese football player. He played for Japan national team. He currently works for English side Leeds United as Head of Football Development (Asia).

Motohiro Yamaguchi is a former Japanese football player and manager. He played for Japan national team.

F.C. Kariya are a Japanese football (soccer) club based in Kariya, Aichi. They play in the first division of Tōkai Adult Soccer League and they're aiming towards professional leagues.

The 2012 Nadeshiko League season was won by INAC Kobe Leonessa, who went undefeated the whole season and defended their 2011 title.

The 2013 Nagoya Grampus season was Nagoya Grampus' 21st season in the J. League Division 1 and 31st overall in the Japanese top flight. It was Dragan Stojković last season as manager, as he left at the end of the season, and they finsed 11th in the J League, reached the group stage of the J. League Cup and were knocked out of the Emperor's Cup at the second round stage by Nagano Parceiro.

Kumamoto Renaissance FC (熊本ルネサンスフットボールクラブ) is a women's football club playing in Japan's football league, Q League. Its hometown is the city of Kumamoto.

The 2014 Nagoya Grampus season was Nagoya Grampus' 22nd season in the J.League Division 1 and 32nd overall in the Japanese top flight. It is Akira Nishino's first season as manager after replacing Dragan Stojković in the off-season. They finished the season in 10th place, reaching the Quarter Finals of the Emperor's Cup whilst failing to progress from the group stages of the J.League Cup.

Statistics of Empress's Cup in the 2018 season.