Last updated June 06, 2020
This article is about the 20th century Indian poet. For other uses, see Nagarjuna (disambiguation).

Vaidyanath Mishra (30 June 1911 - 5 November 1998), better known by his pen name Nagarjun, was a Hindi and Maithili poet who has also penned a number of novels, short stories, literary biographies and travelogues, and was known as Janakavi- the People's Poet. He is regarded as the most prominent protagonist of modernity in Maithili. [3] [4]

Vaidyanath Mishra was born on 30 June 1911, in the village of Tarauni in Darbhanga District of Bihar, India, he spent most of his days in his mother's village Satlakha of Madhubani district, Bihar. He later converted to Buddhism and got the name Nagarjun. His mother died when he was only three, and his father being a vagabond himself, couldn't support him so young Vaidyanath thrived on the support of his relatives, and the scholarships he won on the account of him being an exceptional student. Soon he became proficient in Sanskrit, Pali and Prakrit languages, which he first learnt locally and later at Varanasi and Calcutta, where he was also semi-employed, while pursuing his studies. Meanwhile he married Aparajita Devi and the couple had six children.[ citation needed ]

He started his literary career with Maithili poems by the pen-name of Yatri (यात्री) in the early 1930s. By the mid 1930s, he started writing poetry in Hindi. His first permanent job of a full-time teacher, took him to Saharanpur (Uttar Pradesh), though he didn't stay there for long as his urge to delve deeper into Buddhist scriptures, took him to the Buddhist monastery at Kelaniya, Sri Lanka, where in 1935, he became a Buddhist monk, entered the monastery and studied the scriptures, just as his mentor, Rahul Sankrityayan had done earlier, and hence took upon the name "Nagarjun". While at the monastery, he also studied Leninism and Marxism ideologies, before returning to India in 1938 to join 'Summer School of Politics' organised by noted peasant leader, Sahajanand Saraswati, founder of Kisan Sabha. [5] A wanderer by nature, Nagarjun spent a considerable amount of his time in the 1930s and the 1940s travelling across India.

He also participated in many mass-awakening movements before and after independence. Between 1939 and 1942, He was jailed by the British courts for leading a farmer's agitation in Bihar. For a long time after independence he was involved with journalism.

He played an active role in Jayaprakash Narayan's movement prior to the Emergency period (1975–1977), and therefore was jailed for eleven months, during the emergency period. He was strongly influenced by Leninist-Marxist ideology. This was one of the reasons that he never found patronage from the mainstream political establishments.

The subjects of his poetry are varied. Effects of both his wandering tendencies and activism, is evident in his middle and later works. His famous poems like Bādal kō Ghiratē Dēkhā hai (Hindi : बादल को घिरते देखा है), is a travelogue in its own right. He often wrote on contemporary social and political issues. His famous poem Mantra Kavita (मंत्र कविता), is widely considered the most accurate reflection of a whole generation's mindset in India. Another such poem is Āō Rānī Hum Ḍhōēṅgē Pālakī (Hindi : आओ रानी हम ढोएंगे पालकी), which sarcastically humiliates the then prime minister of India, Jawaharlal Nehru, for the extravagant welcome thrown by him for Queen Elizabeth.

Besides these accepted subjects of poetry, Nagarjun found poetic beauty in unconventional subjects. One of his most astonishing works is a poem based on a show called With Sharp Teeth (पैने दाँतो वाली). Another such creation is a series of poems on a full-grown jackfruit.

Because of the breadth of his poetry, Nagarjun is considered the only Hindi poet after Tulsidas to have an audience ranging from the rural sections of society to the elite. He effectively freed poetry from the bounds of elitism.

Maithili was his mother tongue and he authored many poems, essays and novels in Maithili. He was educated in Sanskrit, Pali, and Hindi. Hindi remained the language of the bulk of his literature. The Hindi of his works varies from highly sanskritized to vernacular forms. He was a poet of the masses, and preferred to write in the language of immediate local impact. Therefore he never adhered to specific bounds of languages.

He also had good grasp of the Bengali language and used to write for Bengali newspapers. He was close to the Bengali Hungry generation or Bhookhi Peerhi poets and helped Kanchan Kumari in translating Malay Roy Choudhury's long poem Jakham and Chana Jor Garam in Hindi.

Nagarjun was given the Sahitya Akademi Award in 1969 for his historic book Patarheen Nagna Gachh, and the 'Bharat Bharati Award' by the Uttar Pradesh government for his literary contributions in 1983. [6] He was also honoured by the Sahitya Akademi Fellowship, India's highest literary award for lifetime achievement, in 1994.[ citation needed ]

Hindi literature includes literature in the various Central Zone Indo-Aryan languages which have writing systems. It is broadly classified into four prominent forms (styles) based on the date of production. They are:

Sachchidananda Hirananda Vatsyayan, popularly known by his nom de plumeAgyeya, was an Indian writer, poet, novelist, literary critic, journalist, translator and revolutionary in Hindi language. He pioneered modern trends in Hindi poetry, as well as in fiction, criticism and journalism. He is regarded as the pioneer of the Prayogavaad (experimentalism) movements in modern Hindi literature.

Ramdhari Singh, known by his nom de plumeDinkar, was an Indian Hindi poet, essayist, patriot and academic, who is considered as one of the most important modern Hindi poets. He remerged as a poet of rebellion as a consequence of his nationalist poetry written in the days before Indian independence. His poetry exuded veer rasa, and he has been hailed as a Rashtrakavi on account of his inspiring patriotic compositions. He was a regular poet of Hindi Kavi sammelan on those days and is hailed to be as popular and connected to poetry lovers for Hindi speakers as Pushkin for Russians.

Athar Hussein Rizvi, known as Kaifi Azmi, was an Indian Urdu poet. He is remembered as the one who brought Urdu literature to Indian motion pictures. Together with Pirzada Qasim, Jaun Elia and others he participated in many memorable Mushaira gatherings of the twentieth century.

Amritlal Nagar was one of the prominent Hindi writers of the twentieth century.

Jainendra Kumar, was a Hindi writer of 20th century. He wrote novels including Sunita and Tyagapatra. 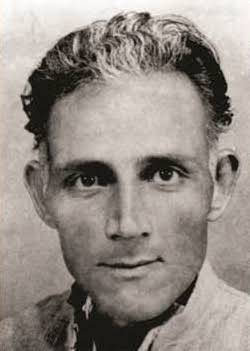 Gajanan Madhav Muktibodh was one of the most prominent Hindi poets, essayist, literary and political critic, and fiction writers of the 20th century. He also remained assistant-editor of journals like, Naya Khun and Vasudha.

Dr. Jaymant Mishra was a renowned Sanskrit scholar of India. He was also a well-known Maithili poet. He had been awarded several prestigious honors including "Mahamahopadhyaya", President Award, "Kalidas Samman" and Vanabhatta award. He was awarded Sahitya Akademi Award in 1995. His major literary contributions were Mahamanavachampu in Sanskrit and Kavita Kusumanjali in Maithili — a compilation of Maithili poems, Mahakavi Vidyapati — a commentary of the legendary Maithili poet. He had also been one of the prominent academicians of the Bihar province of India. He served as the Vice Chancellor of K S D Sanskrit University (1985–1990).

Gulab Khandelwal was an Indian poet who wrote poetry in different forms such as Lyrics, Sonnets, Rubais (Quatrains), Dohas (Couplets), Odes, Elegies, Lyrical Ballads, Epics, Poetic Dramas, Ghazals, and Masnavi with equal felicity. He even introduced some of these forms into Hindi literature and, apart from Hindi, has also written poetry in Urdu and English. The span of his poetic language touches upon Sanskrit on one end and Urdu on the other. Gulab Khandelwal died in Ohio on 2 July 2017.

Devarshi Kala Nath Shastry, is a Sanskrit scholar honoured by the President of India (1998). He is an Indologist and a prolific writer of Sanskrit, Hindi and English, and a well-known linguist, who has contributed to the campaign of evolving technical terminology in Indian languages and ensuring a respectable status to Hindi, the official language of his state and the Indian union.

Ganga Prasad Vimal was an Indian writer. He was a poet, story writer, novelist and translator.

Uday Prakash is a Hindi poet, scholar, journalist, translator and short story writer from India. He has worked as administrator, editor, researcher, and TV director. He writes for major dailies and periodicals as a freelancer. He has also received several awards for his collection of short stories, Mohan Das.

Mridula Garg is an Indian writer who writes in Hindi and English languages. She has published 30 books in Hindi – novels, short story collections, plays and collections of essay – of which she has rendered three into English. She is a recipient of the prestigious Sahitya Akademi Award.

Shrilal Shukla was a Hindi writer, notable for his satire. He worked as a PCS officer for the state government of Uttar Pradesh, later inducted into the IAS. He has written over 25 books, including Raag Darbari, Makaan, Sooni Ghaati Ka Sooraj, Pehla Padaav and Bisrampur Ka Sant. 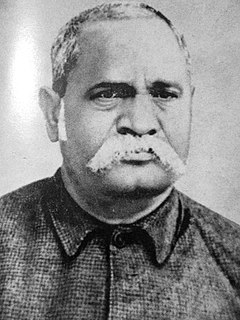 Nathuram Sharma, better known by his pen-name Mahakavi Shankar, (1859–1932) was a Hindi and Urdu poet from Harduaganj, Aligarh, North-Western Provinces, British India. He worked with the Irrigation Department at Kanpur and subsequently as an Ayurvedic physician. His poetic works are primarily in the dialects of Braj Bhasha and Khariboli. He was a writer of Modern Period.

Parichay Das, born Ravindra Nath Srivastava, is an Indian writer, essayist, poet and editor of contemporary Bhojpuri poetry. He writes in Bhojpuri, Maithili and Hindi. He is Ph.D. from Gorakhpur University, Gorakhpur. He is ex Secretary, Maithili-Bhojpuri Academy, Delhi Government and ex Secretary, Hindi Academy, Delhi Government. He has written/ edited/ text edited more than 30 books. He received the Dwi-Vaageesh Samman award for srijan evam anuvaad [ writing and translation ] by the Bhartiya Anuvad Parishad [ Translator's Association of India] in 2012.. He received Bhojpuri Keerti Sammaan, Bharteey Dalit Sahitya Sammaan, Shyam Narayan Pandey Sammaan,Editor's Choice Award and Damodar Das Chaturvedi Bhasha-Sahitya Sammaan. He delivered a lecture on Bhojpuri in Kathmandu as representative of kendriy Sahitya Akademi in 2012. He recited his poems in SAARC Literary Summit in Delhi in 2011. He is considered a unique personal essay writer in Indian Languages and path breaker poet in Bhojpuri.

Surendra Jha 'Suman', also referred to as 'Suman Ji' or Acharya Surendra Jha 'Suman', was a Maithili poet, writer, publisher, editor and elected member of legislative assembly and parliament. He is also known for his role as publisher, editor, journalist, social and cultural reformer and promoter of Mithila culture. He authored about forty books in Maithili and was also the Editor of various publications and books in Maithili, Sanskrit and Hindi. He served the Governing Bodies of various literary and academic institutions in different capacities in his State. He was also the recipient of Sahitya Akademy Award in 1971 for Payaswini and in 1995 for Translation Rabindra Natakavali Vol. I. He was born in a village known as Ballipur in the Samastipur district of Bihar.

Usha Kiran Khan is a writer who works in the Hindi and Maithili languages. She is also a retired academic historian.

Leeladhar Jagudi is an Indian teacher, journalist and poet of Hindi literature. He is the author of several poetry anthologies including Natak Jari Hai and Shankha Mukhi Shikharon Par and is a recipient of the Sahitya Akademi Award, for his 1997 anthology, Anubhav Ke Aakash Mein Chand. The Government of India awarded him the fourth highest civilian honour of the Padma Shri, in 2004, for his contributions to Hindi literature.