Nagasaki is the capital and largest city of Nagasaki Prefecture, with other major cities including Sasebo, Isahaya, and Ōmura. Nagasaki Prefecture is located in western Kyūshū with a territory consisting of many mainland peninsulas centered around Ōmura Bay, as well as islands and archipelagos including Tsushima and Iki in the Korea Strait and the Gotō Islands in the East China Sea. Nagasaki Prefecture is known for its century-long trading history with the Europeans and as the sole place of direct trade and exchange between Japan and the outside world during the Sakoku period. Nagasaki Prefecture is home to several of the Hidden Christian Sites in the Nagasaki Region which have been declared a UNESCO World Heritage Site.

Nagasaki Prefecture was created by merging of the western half of the former province of Hizen with the island provinces of Tsushima and Iki. [1] Facing China and Korea, the region around Hirado was a traditional center for traders and pirates.

During the 16th century, Catholic missionaries and traders from Portugal arrived and became active in Hirado and Nagasaki, which became a major center for foreign trade. After being given free rein in Oda Nobunaga's period, the missionaries were forced out little by little, until finally, in the Tokugawa era, Christianity was banned under the Sakoku national isolation policy: Japanese foreign trade was restricted to Chinese and Dutch traders based at Dejima in Nagasaki. However, Kirishitan (Japanese Christian) worship continued underground. These Kakure Kirishitan (hidden Christians) were tried at every step, forced to step on fumi-e ("trample pictures", images of the Virgin Mary and saints) to prove that they were non-Christian. With the banishment of all Catholic missionaries, traders from Catholic countries were also forced out of the country. Along with them, their children, half Japanese and half European, were forced to leave. The majority was sent to Jagatara (Jakarta) and are still remembered by the locals as the people who wrote the poignant letters which were smuggled across the sea to their homeland.

Today, Nagasaki has prominent Catholic churches, and the Hidden Christian Sites in the Nagasaki Region, have been included on the UNESCO World Heritage List.

During the Meiji Restoration, Nagasaki and Sasebo became major ports for foreign trade, and eventually major military bases and shipbuilding centers for the Imperial Japanese Navy and the Mitsubishi Heavy Industries up to World War II. On August 9, 1945, the United States dropped an atomic bomb on Nagasaki, which destroyed all buildings in a 1.6 kilometres (1.0 mi) radius from the point of impact and extensively damaged other parts of the city. Roughly 39,000 people were killed, including 27,778 Japanese munitions workers, 2,000 Korean forced workers, and 150 Japanese soldiers. About 68-80% of the industrial production was destroyed to the point it would not recover for months or at least a year.

Nagasaki Prefecture contains many areas prone to heavy rain and landslide damage. In July 1957, mainly in the Isahaya area, damage from heavy rains, flooding and landslides lead to a death toll of 586, with 136 people missing and 3,860 injured. In July 1982, typhoon damage in the Nagasaki area lead to 299 fatalities, according to a report by the Japanese government.[ citation needed ]

Nagasaki borders Saga Prefecture on the east, and is otherwise surrounded by water, including Ariake Bay, the Tsushima Straits (far from Busan and South Gyeongsang Province, South Korea), and the East China Sea. It also includes a large number of islands such as Tsushima, Iki and Goto. Most of the prefecture is near the coast and there are a number of ports such as Nagasaki and a United States Navy base at Sasebo.

As of 1 April 2014, 18% of the total land area of the prefecture was designated as Natural Parks, namely the Saikai and Unzen-Amakusa National Parks; Genkai and Iki-Tsushima Quasi-National Parks; and Hokushō, Nishi Sonogi Hantō, Nomo Hantō, Ōmurawan, Shimabara Hantō, and Taradake Prefectural Natural Parks. [2]

See also: List of cities in Nagasaki Prefecture by population

These are the towns and villages of each district:

The following municipalities have been dissolved since the year 2000.

Religious denominations in the Nagasaki Prefecture (1996) [3]

Nagasaki is the most Christianized area in Japan with Roman Catholic missions having been established there as early as the 16th century. Shusaku Endo's novel Silence draws from the oral history of the local Christian (Kirishitan) communities, both Kakure Kirishitan and Hanare Kirishitan.

As of 2002, there are 68,617 Catholics in Nagasaki Prefecture, accounting for 4.52 percent of the population of the prefecture.

The city has one football team, V-Varen Nagasaki, which plays in the J2 League.

The Nagasaki Saints of the former Shikoku-Kyūshū Island League made Nagasaki Prefecture their home prior to their dissolving.

The current governor of Nagasaki is former vice-governor Hōdō Nakamura. First elected in 2010 to succeed Genjirō Kaneko, he was reelected for a second term in 2014.

The prefectural assembly of Nagasaki has a regular membership of 46, elected in 16 electoral districts in unified regional elections (last round: 2011). As of April 2014, the LDP-led caucus has 23 members, the DPJ-SDP-led caucus 17.

Amakusa (天草), which means "Heaven's Grass," is a series of islands off the west coast of Kyushu, the southernmost of the four main islands of Japan. 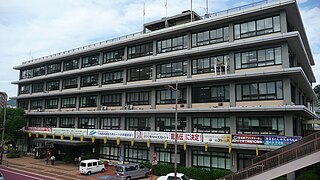 Nagasaki is the capital and the largest city of Nagasaki Prefecture on the island of Kyushu in Japan. 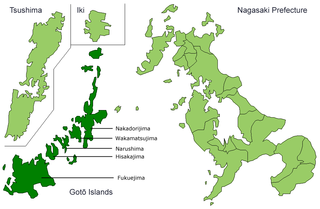 The Gotō Islands are Japanese islands in the East China Sea, off the western coast of Kyūshū. They are part of Nagasaki Prefecture. 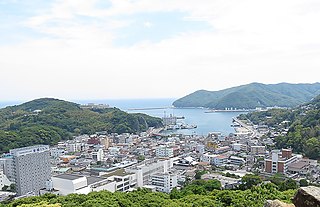 Tsushima is an island city grouped in Nagasaki Prefecture, Japan. It is the only city of Tsushima Subprefecture and it encompasses all of Tsushima Island Archipelago, which lies in the Tsushima Strait north of Nagasaki on the western side of Kyushu, the southernmost mainland island of Japan. As of March 2017, the city has an estimated population of 31,550 and a population density of 45 persons per km2. Its total area is 708.61 km2, 17.3% of the area of Nagasaki Prefecture.

Ikitsuki was a town on the island of the same name located in Kitamatsuura District, Nagasaki Prefecture, Japan. 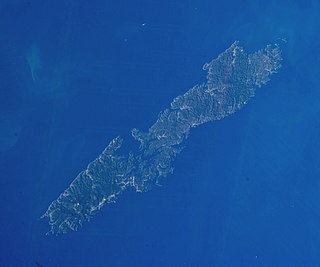 Tsushima Island is an island of the Japanese archipelago situated in-between the Tsushima Strait and Korea Strait, approximately halfway between Kyushu and the Korean Peninsula. The main island of Tsushima, once a single island, was divided into two in 1671 by the Ōfunakoshiseto canal and into three in 1900 by the Manzekiseto canal. These canals were driven through isthmuses in the center of the island, forming "North Tsushima Island" (Kamino-shima) and "South Tsushima Island" (Shimono-shima). Tsushima also incorporates over 100 smaller islands, many tiny. The name Tsushima generally refers to all the islands of the Tsushima archipelago collectively. Administratively, Tsushima Island is in Nagasaki Prefecture.

Iki Island, or the Iki Archipelago, is an archipelago in the Tsushima Strait, which is administered as the city of Iki in Nagasaki Prefecture, Japan. The islands have a total area of 138.46 square kilometres (53.46 sq mi) with a total population of 28,008. Only four (4) of the twenty-three (23) named islands are permanently inhabited. Together with the neighboring islands of Tsushima, they are collectively within the borders of the Iki–Tsushima Quasi-National Park. 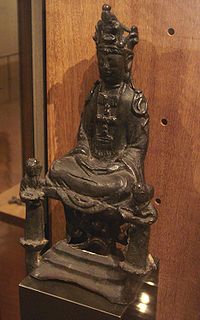 Kakure Kirishitan is a modern term for a member of the Catholic Church in Japan that went underground at the start of the Edo period in the early 17th century.

Saikai National Park is a marine national park located in Nagasaki prefecture of northwest Kyūshū, Japan. It consists of the coastal regions of Matsuura Peninsula, extending northward from the port city of Sasebo and encompasses the Kujūku Islands, with over 200 islands to the west, Hirado Peninsula further west, and the coastlines of the Gotō Islands to the far west. 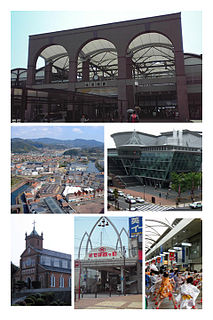 Matsura Takanobu or Taqua Nombo was a 16th-century Japanese samurai and 25th hereditary lord of the Matsura clan of Hirado. He was one of the most powerful feudal lords of Kyūshū and one of the first to allow trading with Europeans, particularly the Portuguese, through whom he amassed great profits in the import of western firearms. He was also an early host and patron to the Jesuits, who he hoped would help secure an increase in trade with the Portuguese and other European traders.

Christian missionaries arrived with Francis Xavier and the Jesuits in the 1540s and briefly flourished, with over 100,000 converts, including many daimyōs in Kyushu. It soon met resistance from the highest office holders of Japan. Emperor Ogimachi issued edicts to ban Catholicism in 1565 and 1568, but to little effect. Beginning in 1587 with imperial regent Toyotomi Hideyoshi's ban on Jesuit missionaries, Christianity was repressed as a threat to national unity. After the Tokugawa shogunate banned Christianity in 1620 it ceased to exist publicly. Many Catholics went underground, becoming hidden Christians, while others lost their lives. Only after the Meiji Restoration was Christianity re-established in Japan.

Naru Island is one of the Gotō Islands in Japan. It is part of the city of Gotō in Nagasaki Prefecture.

The Hichiku dialect is a group of the Japanese dialects spoken in western Kyushu. The name Hichiku (肥筑) is constructed by extracting a representative kanji from Hizen (肥前), Higo (肥後), Chikuzen (筑前) and Chikugo (筑後), names of old provinces in there.

Hario Island (針尾島), is a large island located in the mouth of Ōmura Bay, part of the Nagasaki Prefecture, Japan. It is the 7th largest and 6th most populous island of the islands in Nagasaki Prefecture. The island, 33.16 km² in area, had 9767 inhabitants as of 2015. The island is dominated by the Citrus unshiu plantations. The island access is by road and rail transport from the mainland of Kyushu through seven bridges linking it to Sasebo and Saikai cities. The main access routes are Japan National Route 202 and Japan National Route 205.

Yokoseura (横瀬浦) is a port located at the northern tip of the Nishisonogi Peninsula on the Japanese island of Kyushu, administratively under Saikai city, Nagasaki Prefecture. It was developed as an entrepot by the Portuguese in 1562 with the permission of the local lord Ōmura Sumitada, but was burned down a year later during a rebellion against Sumitada.