It is operated by Nagoya Stock Exchange, Inc. (株式会社名古屋証券取引所) and has normal trading sessions from 09:00am to 03:30pm on all days of the week except Saturdays, Sundays and holidays declared by the Exchange in advance. [3] 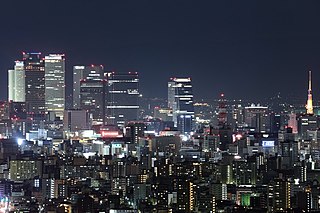 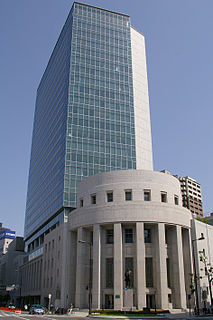 The Aonami Line is a third-sector railway line in the city of Nagoya operated by the Nagoya Rinkai Rapid Transit. Officially called the Nishi-Nagoyakō Line, it connects Nagoya Station with Kinjō-futō Station, and was a freight branch line of Tokaido Main Line, converted for passenger usage in October 2004.

Mizuho Securities Co., Ltd. is a Japanese investment banking and securities firm. It is a wholly owned subsidiary of Mizuho Financial Group. 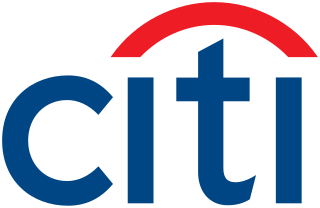 JASDAQ, formerly the JASDAQ Securities Exchange is one of the sections of the Tokyo Stock Exchange. It was formerly an independent stock exchange.

The Kamiiida Line is a subway line, part of the Nagoya Municipal Subway system in Nagoya, Japan. It runs between two stations, Kamiiida and Heian-dōri, both at Kita Ward, Nagoya. Both stations have automatic platform gates. 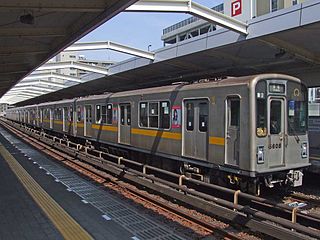 The Nagoya Municipal Subway 5000 series (名古屋市交通局5000形) is a rapid transit electric multiple unit (EMU) train type formerly operated by the Transportation Bureau City of Nagoya on the Nagoya Subway Higashiyama Line in Japan from July 1980 until August 2015. Following their withdrawal in Japan, five sets were shipped to Argentina in 2015 for use on Line C of the Buenos Aires Underground.

Nagoya City Hall is the city hall of the city of Nagoya, Japan.

The following are the events in professional sumo during 2013.