Nahrin District is a district in the central part of Baghlan Province in Afghanistan. To the west lie the major towns of Baghlan and Puli Khumri. The district centre is Nahrin. The population of the district was estimated to be around 57,509 in 2004, of which 60% are Tajiks, 35% Pashtun and 5% Uzbeks. [2]

On 25 March 2002, a major earthquake shook Nahrin District, causing significant loss of life and enormous damage to infrastructure and water resources. The earthquake measured 5.9 on the Richter scale with the epicentre almost directly on Nahrin City, at the relatively shallow depth of 33 km. A second earthquake hit Nahrin on 12 April 2002. [3] More damage was brought to an already devastated area of Nahrin City, while at the same time heavily damaging several additional villages. The region also experienced three years of ruinous drought. [4] 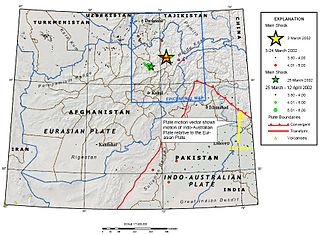 The 2002 Hindu Kush earthquakes struck in northern Afghanistan during the month of March. At least 166 people were killed with a very large and intermediate-depth mainshock on March 3. Three weeks later, at least a further thousand were killed during a large, but shallow aftershock that had a maximum Mercalli intensity of VII. The M7.4 and M6.1 reverse events were focused in the Hindu Kush mountain range area.

The Qayen earthquake, also known as the Ardekul or Qaen earthquake, struck northern Iran's Khorasan Province in the vicinity of Qaen on May 10, 1997 at 07:57 UTC. The largest in the area since 1990, the earthquake registered 7.3 on the moment magnitude scale and was centered approximately 270 kilometers (170 mi) south of Mashhad on the village of Ardekul. The third earthquake that year to cause severe damage, it devastated the Birjand–Qayen region, killing 1,567 and injuring more than 2,300. The earthquake—which left 50,000 homeless and damaged or destroyed over 15,000 homes—was described as the deadliest of 1997 by the United States Geological Survey. Some 155 aftershocks caused further destruction and drove away survivors. The earthquake was later discovered to have been caused by a rupture along a fault that runs underneath the Iran–Afghanistan border.

The 1983 Borah Peak earthquake occurred on October 28, at 8:06:09 a.m. MDT in the western United States, in the Lost River Range at Borah Peak in Central Idaho.

The 2010 Baja California earthquake occurred on April 4 with a moment magnitude of 7.2 and a maximum Mercalli intensity of IX (Violent). The shock originated at 15:40:41 local time south of Guadalupe Victoria, Baja California, Mexico.

The April 2011 Miyagi earthquake occurred off the coast of Miyagi Prefecture, approximately 66 kilometres (41 mi) east of Sendai, Japan. The Mw7.1 thrust earthquake was classified as an aftershock of the March 11 Tōhoku earthquake, and occurred at 23:32 JST (14:32 UTC) on Thursday, 7 April 2011.

On 11 June 2012, two moderate earthquakes struck northern Afghanistan, causing a large landslide. The landslide buried the town of Sayi Hazara, trapping 71 people. After four days of digging, only five bodies were recovered and the search was called off. Overall, 75 people were killed and 13 others were injured.

The 2013 Bushehr earthquake occurred with a moment magnitude of 6.3 on April 9 in Iran. The shock's epicenter was in the province of Bushehr, near the city of Khvormuj and the towns of Kaki and Shonbeh. At least 37 people were killed, mostly from the town of Shonbeh and villages of Shonbeh-Tasuj district, and an estimated 850 people were injured.

The 2013 Balochistan earthquakes took place in late September in southwestern Pakistan. The mainshock had a moment magnitude of 7.7 and a maximum Mercalli intensity of VII. At least 825 people were killed and hundreds more were injured. On 28 September, a M6.8 aftershock occurred to the north at a depth of 14.8 kilometres, killing at least 22 people.

The April 2015 Nepal earthquake killed nearly 9,000 people and injured nearly 22,000. It occurred at 11:56 Nepal Standard Time on 25 April 2015, with a magnitude of 7.8Mw or 8.1Ms and a maximum Mercalli Intensity of VIII (Severe). Its epicenter was east of Gorkha District at Barpak, Gorkha, and its hypocenter was at a depth of approximately 8.2 km (5.1 mi). It was the worst natural disaster to strike Nepal since the 1934 Nepal–Bihar earthquake. The ground motion recorded in the capital of Nepal was of low frequency, which, along with its occurrence at an hour where many people in rural areas were working outdoors, decreased the loss of property and human lives.

A major earthquake occurred in Nepal on 12 May 2015 at 12:50 pm local time with a moment magnitude of 7.3, 18 kilometres (11 mi) southeast of Kodari. The epicenter was on the border of Dolakha and Sindhupalchowk, two districts of Nepal. This earthquake occurred on the same fault as the larger magnitude 7.8 earthquake of 25 April, but further east than the original quake. As such, it is considered to be an aftershock of the April quake. It struck at a depth of 18.5 km (11.5 mi). Shaking was felt in northern parts of India including Bihar, Uttar Pradesh and West Bengal. Tremors were felt as far as about 2,400 km away from the epicenter in Chennai. 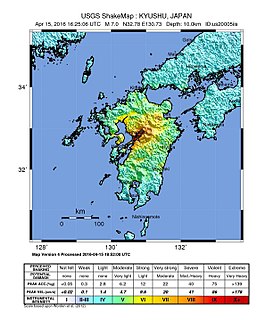 The 2016 Ecuador earthquake occurred on April 16 at 18:58:37 ECT with a moment magnitude of 7.8 and a maximum Mercalli intensity of VIII (Severe). The very large thrust earthquake was centered approximately 27 km (17 mi) from the towns of Muisne and Pedernales in a sparsely populated part of the country, and 170 km (110 mi) from the capital Quito, where it was felt strongly. Regions of Manta, Pedernales and Portoviejo accounted for over 75 percent of total casualties. Manta's central commercial shopping district, Tarqui, was completely destroyed. Widespread damage was caused across Manabí Province, with structures hundreds of kilometres from the epicenter collapsing. At least 676 people were killed and 16,600 people injured. President Rafael Correa declared a state of emergency; 13,500 military personnel and police officers were dispatched for recovery operations. 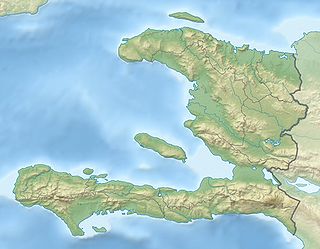 The 1921 Sevier Valley earthquake was a series of three earthquakes. The primary quake was a magnitude Mw6.3 earthquake that occurred on Thursday, 29 September 1921 at approximately 7:12 AM MT in Elsinore, Utah, United States. The first aftershock occeured in the evening on the same day, and a second aftershock occurred two days later on 1 October. No people were killed in the quake or in the subsequent aftershocks.