Naide Gomes started competing under the flag of her birth country São Tomé and Príncipe and represented it at the Sydney 2000 Olympics, though she has lived in Portugal since she was 11 years old. At the Sydney Olympics, Gomes was the São-Tomé flag carrier in the opening ceremony. Before changing nationality she set the current São Tomé and Príncipe records in 100 metres hurdles, long jump, high jump, triple jump, shot put, javelin throw and heptathlon. [2]

She gained Portuguese citizenship in 2001, [3] and has since represented Portugal at major international events.

Gomes has won the gold medal for long jump at the 2007 European Athletics Indoor Championships, raising the national record to 6.89 m.

In Madrid, she became the first Portuguese athlete ever to reach the seven metres distance in the long jump, by jumping 7.01m. In Valencia she won gold at the World Athletics Indoor Championships 2008, by jumping 7.00m.

On 22 July, Naide Gomes was the winner of the IAAF Super Grand Prix DN Galan, Stockholm, Sweden, with a new national record of 7.04 m.

On 19 August, at the 2008 Summer Olympics held in Beijing, China, a top-favorite for the gold medal, in peak physical condition and having dominated the season, Gomes unexpectedly fouled on her first two attempts and then stutter-stepped on her final try jumping a mere 6.29 m, thus failing to qualify to the final.

On 26 March 2015, Naide Gomes announced her retirement in a special news conference with close friends and the long term coach, at age 35. [5] [6] Main reasons appointed the prolonged injuries she is suffering since 2013, that took her away from the tracks, and the need of another surgery. She said to be very proud of her career, after winning 11 international medals, though failing at Olympic level, and wants to continue to be close to Athletics, either as a coach or as physiotherapist. She also announced she's expecting her first child. [7] 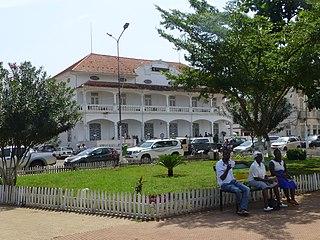 São Tomé is the capital and largest city of the Central African island country of São Tomé and Príncipe. Its name is Portuguese for "Saint Thomas". Founded in the 15th century, is one of Africa's oldest colonial cities.

Portugal competed at the 2004 Summer Olympics in Athens, Greece, from 13 to 29 August 2004. Portuguese athletes have competed at every Summer Olympic Games in the modern era since 1912. The Olympic Committee of Portugal sent the nation's second-largest team to the Games. A total of 81 athletes, 64 men and 17 women, were selected by the committee to participate in 15 sports. Men's football was the only team-based sport in which Portugal had its representation at these Games. There was only a single competitor in badminton, canoeing, equestrian, artistic and trampoline gymnastics, triathlon, and wrestling, which made its official Olympic comeback after an eight-year absence.

São Tomé and Príncipe competed at the 2004 Summer Olympics in Athens, Greece, which was held from 13 to 29 August 2004. The country's participation at Athens marked its third appearance in the Summer Olympics since its debut in the 1996 Summer Olympics.

São Tomé and Príncipe competed at the 2000 Summer Olympics in Sydney, Australia, which took place between 15 September to 1 October 2000. The country's participation in Sydney marked its second appearance at the Summer Olympics since its debut in the 1996 Summer Olympics. 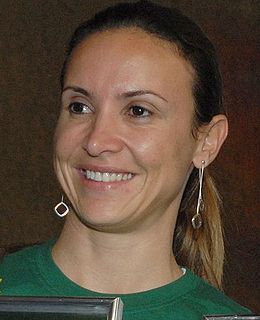 Maurren Higa Maggi is a former Brazilian track and field athlete and Olympic gold medallist. She is the South American record holder in the 100 metres hurdles and long jump, with 12.71 seconds and 7.26 metres respectively. She also has a best of 14.53 metres in the triple jump – a former South American record. She is the first Brazilian woman to win an Olympic gold medal in an individual sport.

Nelson ÉvoraGCIH is an Ivory Coast-born Portuguese track and field athlete who specializes in the triple jump. 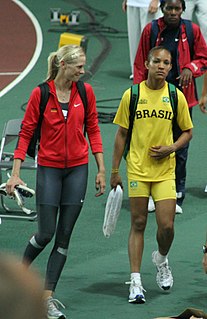 Keila da Silva Costa is a Brazilian long jumper and triple jumper. She has competed in three Olympic Games, 2004, 2008 and 2012, and has reached the final round both there and in World Championships and World Indoor Championships. She is the South American record holder in triple jump with 14.58 metres, and has 6.88 metres in the long jump. Both results were achieved in 2007.

Lucimara Silvestre da Silva is a Brazilian track and field athlete who competes in the heptathlon. She represented her country at the 2008 Beijing Olympics and competed at the World Championships in Athletics in 2007. Her personal best of 6076 points is the South American record for the event.

Ana Cláudia Lemos Silva is a Brazilian track and field athlete who competes in sprinting events. She is the former South American record holder in the 100 metres (11.05 seconds) and the current (2017) record holder in the 200 metres (22.48 seconds). She also was part of the team that broke the 4×100 metres relay continental record with a time of 42.29 seconds.

The 2000 Ibero-American Championships in Athletics was the ninth edition of the international athletics competition between Ibero-American nations which was held at the Estádio Célio de Barros in Rio de Janeiro, Brazil on 20 and 21 May. With a total of 308 athletes, the number of competitors was the lowest since 1990. The Spanish team was much smaller than previous delegations as most of the Spaniards chose to focus on the 2000 Sydney Olympics instead. Other national teams used the competition as a chance to gain an Olympic qualifying mark.

The African island nation of São Tomé and Príncipe competed at the 2012 Summer Olympics in London, held from 27 July to 12 August 2012. This was the nation's fifth appearance at the Olympics since its debut in 1996. Two track and field athletes, Christopher Lima da Costa and Lecabela Quaresma were selected to the team by wildcard places, without having qualified at any sporting event. Quaresma was selected as flag bearer for the opening and closing ceremonies. Neither of the two athletes progressed beyond the first round of their respective events.

The 2019 IAAF World Athletics Championships was the seventeenth edition of the biennial, global athletics competition organised by the International Association of Athletics Federations (IAAF). It was held between 27 September and 6 October 2019 in Doha, Qatar, at the renovated multi-purpose Khalifa International Stadium, but reduced to 21,000 available seats. 1,772 athletes from 206 teams competed in 49 athletics events over the ten-day competition, comprising 24 events each for men and women, plus a mixed relay. There were 43 track and field events, 4 racewalking events, and 2 marathon road running events. The racewalking and marathon events were held in Doha Corniche.