The Nanakshahi (Punjabi : ਨਾਨਕਸ਼ਾਹੀ, nānakashāhī, Shahmukhi Punjabi:نانک شاہی) calendar is a tropical solar calendar that is used in Sikhism and is based on the 'Barah Maha' (Punjabi : ਬਾਰਹ ਮਾਹਾ). Barah Maha was composed by the Sikh Gurus and translates as the "Twelve Months". It is a poem reflecting the changes in nature which are conveyed in the twelve-month cycle of the Year. [1] The year begins with the month of Chet, with 1 Chet corresponding to 14 March. The first year of the Nanakshahi Calendar starts in 1469 CE: the year of the birth of Guru Nanak Dev. [2]

The Nanakshahi Calendar is named after the founder of the Sikh religion, Guru Nanak Dev Ji. [3]

References to the Nanakshahi Era have been made in historic documents. [8] Banda Singh Bahadur adopted the Nanakshahi calendar in 1710 C.E. after his victory in Sirhind (12 May 1710 C.E.) [9] according to which the year 1710 C.E. became Nanakshahi 241. However, Singh (2008) states the date of the victory as 14 May 1710 CE. [10] According to Dilgeer (1997), Banda "continued adopting the months and the days of the months according to the Bikrami calendar". [11] Banda Singh Bahadur also minted new coins also called Nanakshahi. [12] Herrli (1993) states that "Banda is supposed to have dated his coins according to his new calendar. Although Banda may have proclaimed this era, it cannot be traced in contemporary documents and does not seem to have been actually used for dating". [13] According to The Panjab Past and Present (1993), it is Gian Singh who "is the first to use Nanak Shahi Samvats along with those of Bikrami Samvats" in the Twarikh Guru Khalsa. [14] According to Singha (1996), Gian Singh was a Punjabi author born in 1822. [15] Gian Singh wrote the Twarikh Guru Khalsa in 1891. [16]

The amended Nanakshahi calendar was adopted in 1998 [22] but implemented in 2003 [23] [24] by the Shiromani Gurdwara Prabhandak Committee to determine the dates for important Sikh events. The calendar was implemented during the SGPC presidency of Sikh scholar Prof. Kirpal Singh Badungar at Takhat Sri Damdama Sahib in the presence of Sikh leadership. [18] Nanakshahi Calendar recognizes the adoption event, of 1999 CE, in the Sikh history when SGPC released the first calendar with permanently fixed dates in the Tropical Calendar. Therefore, the calculations of this calendar do not regress back from 1999 CE into the Bikrami era, and accurately fixes for all time in the future. [25]

Features of the Nanakshahi calendar (2003)

In 2010, the Shiromani Gurdwara Prabhandak Committee ("SGPC") modified the calendar so that the dates for the start of the months are movable so that they coincide with the Bikrami calendar and changed the dates for various Sikh festivals so they are based upon the lunar phase. This has created controversy with some bodies adopting the original 2003 version, also called the "Mool Nanakshahi Calendar" [32] and others, the 2010 version. [33] By 2014, the SGPC had scrapped the original Nanakshahi calendar from 2003 and reverted to the Bikrami calendar entirely, however it was still published under the name of Nanakshahi. [34] The Sikh bodies termed it a step taken under pressure from the RSS and Shiromani Akali Dal. [35] There is also some controversy about the acceptance of the calendar altogether among certain sectors of the Sikh world. [27]

SGPC president, Gobind Singh Longowal, on 13 March 2018 urged all Sikhs to follow the current (2010) Nanakshahi calendar. [36] The previous SGPC President before Longowal, Prof. Kirpal Singh Badungar, tried to appeal the Akal Takht to celebrate the birthday of Guru Gobind Singh on 23 Poh (5 January) as per the original Nanakshahi calendar, but the appeal was denied. [37] The PSGPC and a majority of the other gurdwara managements across the world are opposing the modified version of the calendar citing that the SGPC reverted to the Bikrami calendar. They argue that in the Bikrami calendar, dates of many gurpurbs coincide, thereby creating confusion among the Sikh Panth. [35]

According to Ahaluwalia (2003), the Nanakshahi calendar goes against the use of lunar Bikrami dates by the Gurus themselves and is contradictory. It begins with the year of birth of Guru Nanak Dev, but the first date, 1 Chet, is when Guru Har Rai was installed the seventh Guru. [38] However, the first date of the Nanakshahi calendar (1 Chet) is based upon the Barah Maha of the Guru Granth Sahib, which has Chet as the first month. [39] Pal Singh Purewal, as reported in the Edmonton Journal (March 2018) has stated that his aims in formulating the Nanakshahi calendar were, "first and foremost, it should respect sacred holy scriptures. Second, it should discard the lunar calendar and use only a solar one. Third, all the dates should be fixed and not vary from year to year." [34] In reality however, state Haar and Kalsi (2009), the introduction of the Nanakshahi calendar has resulted in many festivals being "celebrated on two dates depending on the choice of the management of the local gurdwaras." [40]

The start date of the months in the current Nanakshahi calendar are not fixed. [3]

Dates of observance of festivals as determined by reference to the 2003 version.

Movable dates for Sikh Festivals in the 2003 and 2010 versions. (These change every year in line with the Lunar Phase) [43]

Sikhism, or Sikhi, is an Indian monotheistic religion that originated in the Punjab region of the Indian subcontinent around the end of the 15th century.

Chet is a first month of the Nanakshahi calendar, which govern the activities within Sikhism. This month coincides with Chaitra in the Hindu calendar and the Indian national calendar, and March and April in the Gregorian and Julian calendars and is 31 days long. Also during this month, the second son of Guru Gobind Singh, Sahibzada Jujhar Singh was born on 9 April 1691.

The following outline is provided as an overview of and topical guide to Sikhism:

Sawan is a fifth month in the Nanakshahi calendar and the Hindu calendar. It is derived from Sanskrit: श्रावण. Many Indian calendars started in different eras such as Shaka Calendar traditional Vikrama as well as a new Nanakshahi calendar created a few years ago by SGPC which governs the activities within Sikhism. This month coincides with Shraavana in the Hindu calendar and the Indian national calendar, and July and August in the Gregorian and Julian calendars and is 31 days long, like the Gregorian and Julian calendars. This month is the most humid month of the year in South Asia.

Vaisakhi, also known as Baisakhi is a historical and religious festival in Hinduism and Sikhism. It is usually celebrated on 13 or 14 April every year, which commemorates the formation of Khalsa panth of warriors under Guru Gobind Singh in 1699.

Dal Khalsa is a banned Centrist Sikh organisation, based in the city of Amritsar. The organisation was formed in 1978 and came to prominence under the inspiration and time of Jarnail Singh Bhindranwale in 1981. They claim that their primary aim of Dal Khalsa is to achieve the independence of the Punjabi-speaking Sikh majority region of North West India through peaceful and democratic means in order to establish a sovereign Sikh state, Khalistan. 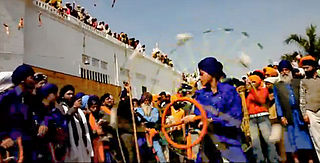 Hola Mohalla, also called Hola, is a one day long Sikh festival which normally falls in the third month of the year which is called march and takes place on the second day of the lunar month of Chett, a day after the Hindu spring festival Holi but sometimes coincides with Holi. Hola Mohalla is a big festive event for Sikhs around the world.

The history of Sikhism started with Guru Nanak Dev Ji. He was the first Guru of the fifteenth century in the Punjab region in the northern part of the Indian subcontinent. The religious practices were formalised by Guru Gobind Singh Ji on 13 April 1699. The latter baptised five persons from different social backgrounds to form Khalsa (ਖ਼ਾਲਸਾ). The first five, Pure Ones, then baptised Gobind Singh ji into the Khalsa fold. This gives the order of Khalsa, a history of around 300 years.

The Sikh Rehat Maryada is a code of conduct and conventions for Sikhism, approved by the Shiromani Gurdwara Parbandhak Committee, Amritsar in 1945. It is one of many Rahitnama written for Sikhs.

A Gurpurab ( ) in Sikh tradition is a celebration of an anniversary of a Guru's birth marked by the holding of a festival.

Karam Singh (1884–1930) was a Sikh historian.He was born in Jhabal a famous town 8km south of Amritsar. His father Jhanda Singh belonged to traditional Sikh family

Followers of Sikhism do not have a preference for meat or vegetarian consumption. There are two views on initiated or "Amritdhari Sikhs" and meat consumption. "Amritdhari" Sikhs can eat meat ."Amritdharis" that belong to some Sikh sects are vehemently against the consumption of meat and eggs.

Harjinder Singh Dilgeer is considered an authority on Sikh history, Gurbani and philosophy. He is the only author who has written Complete History of the Sikhs and has translated Guru Granth Sahib in English and has published NEW MAHAN KOSH Encyclopedia of Sikh literature and Punjab & Sikh History {2 of the 4 volumes of the NEW Mahan Kosh have been published in February 2020}. He has written in detail about the concept and the history of Akal Takht Sahib, Sikh culture, Shiromani Akali Dal, the history of Anandpur Sahib, and Kiratpur Sahib, Dictionary of Sikh Philosophy etc. The Sikh Reference Book is his magnum opus. 'The Sikh Reference Book' is an encyclopaedia consisting of more than 2400 biographies, complete chronology of Sikh history, 400 concepts of Sikh philosophy as well more than 800 Sikh shrines. He has produced a Sikh Encyclopaedia CD-ROM. His latest works are Encyclopaedia of Jalandhar (English), Banda Singh Bahadur, Sikh Twareekh in five volumes, Sikh History in ten volumes ; and English translations of Nitnaym and Sukhmani Sahib.. His latest work is English translation of Guru Granth Sahib, in seven volumes.

The Panjab Digital Library is a voluntary organization digitizing and preserving the cultural heritage of Panjab since 2003. With over 23 million digitized pages, it is the biggest resource of digital material on Panjab. There are many historically significant documents stored and made available online. Its scope covers Sikh and Punjabi culture. The library funded by The Nanakshahi Trust was launched online in August 2009. Its base office is located at Chandigarh.

Lohgarh is a historic town in Bilaspur tehsil of Yamunanagar district of Haryana in India. It was the capital of the Sikh state under Banda Singh Bahadur from 1710 to 1716.

The Punjabi calendar is used by the Punjabi people of the Indian subcontinent, but varies by religions. Historically, the Punjabi Sikhs and Punjabi Hindus have used the Nanakshahi calendar and ancient Indian Bikrami (Vikrami) calendar respectively. Punjabi Muslims use the Arabic Hijri calendar. Some festivals in Punjab, Pakistan are determined by the Punjabi calendar, such as Muharram which is celebrated twice, once according to the Muslim year and again on the 10th of harh. The Nanakshahi and Bikrami calendar are the ones the rural (agrarian) population follows in Punjab, Pakistan.

Balwant Singh Nandgarh is a Sikh politician and Jathedar of Takht Sri Damdama Sahib, one of five seats of temporal authority of Sikhism.