Nanisivik Mine was a zinc-lead mine in the company town of Nanisivik, Nunavut, 750 km (470 mi) north of the Arctic Circle on Baffin Island. It was Canada's first mine in the Arctic. [1] The mine first opened on 15 October 1976 and permanently closed in September 2002 due to low metal prices and declining resources. Mine reclamation began in April 2003. [2] It was one of the most northerly mines in the world. [3]

The mine was served by a port and dock located about 2.7 km (1.7 mi) north. It was used for shipping concentrate from the site, and receiving supplies. It is currently used by the Canadian Coast Guard for training [4] and is intended to become Nanisivik Naval Facility.

The mine also had its own airport (Nanisivik Airport) located about 7 km (4.3 mi) southwest and was the main airport for Arctic Bay, until they expanded the Arctic Bay Airport. The airport is about 19 km (12 mi) directly southeast of Arctic Bay but the road between them is 32 km (20 mi). [5]

Nanisivik has a tundra climate (ET) with long, cold winters and very short, chilly summers that are rarely mild. Early winter tends to be snowiest period of the year, with around 40% of all yearly snowfall falling during this short period. 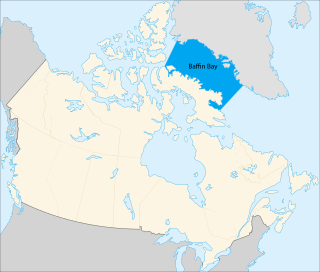 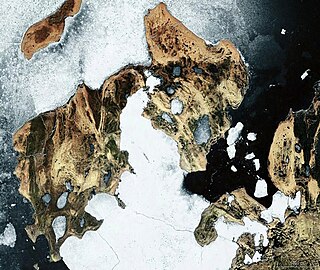 Little Cornwallis Island is one of the Canadian Arctic islands in Nunavut, Canada. It is located at 75°30'N 96°30'W, between Cornwallis Island and Bathurst Island in McDougall Sound, and measures 412 km2 (159 sq mi). It is uninhabited.

Nanisivik Airport, formerly, was located 8 nautical miles south of Nanisivik, Nunavut, Canada, and was operated by the Government of Nunavut. Although Nanisivik Mine closed in September 2002, the airport was in operation until 2011 and served the community of Arctic Bay. This was due to the small size of Arctic Bay Airport. However, on January 13, 2011, First Air transferred all scheduled air services to Arctic Bay's newly-expanded airport.

Nanisivik is a now-abandoned company town which was built in 1975 to support the lead-zinc mining and mineral processing operations for the Nanisivik Mine, in production between 1976 and 2002. The townsite is located just inland from Strathcona Sound, about 20 km (12 mi) east of the community of Arctic Bay in the Canadian territory of Nunavut. 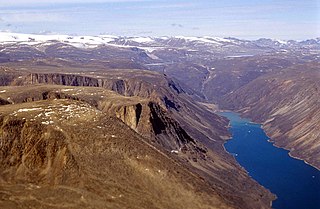 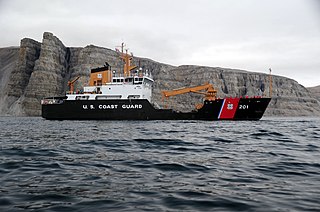 Milne Inlet is a small, shallow arm of Eclipse Sound which, along with Navy Board Inlet, separates Bylot Island from Baffin Island in Nunavut's Qikiqtaaluk Region. Milne Inlet flows in a southerly direction from Navy Board Inlet at the confluence of Eclipse Sound. Milne Inlet is shallow and has high tides and strong winds. It only has 90 days where it is ice-free—from August to October. The hamlet of Mittimatalik —Pond Inlet which is 92% Inuit, is the gateway to many tourist attractions in the region, and is 80 km from Milne Inlet. The region is part of the Arctic Cordillera, with one of Canada's most inhospitable climates—with long, dark winters and temperatures averaging −35 °C (−31 °F).

Wikimedia Commons has media related to Nanisivik Mine .
This page is based on this Wikipedia article
Text is available under the CC BY-SA 4.0 license; additional terms may apply.
Images, videos and audio are available under their respective licenses.