Naniwabashi Station (なにわ橋駅) is a railway station on the Keihan Nakanoshima Line in Kita-ku, Osaka, Japan. It opened on October 19, 2008 (the day of the opening of the Nakanoshima Line).

Yodoyabashi Station is a railway station on the Osaka Metro Midosuji Line and the Keihan Railway Keihan Main Line. It is the nearest station to Osaka City Hall.

Higobashi Station is a railway station on the Osaka Metro Yotsubashi Line in Nishi-ku, Osaka, Japan.

The Nakanoshima Park is the first public park opened by Osaka in 1891, after its foundation as a city. It is located in Kita ward, on the Nakanoshima (中之島) sandbank, lying between Dōjima and Tosabori Rivers. The 11 hectare park houses public facilities such as Osaka Central Public Hall, Osaka Prefectural Nakanoshima Library and Museum of Oriental Ceramics. It also holds a rose garden. The City Hall of Osaka building is located on its west end.

Nakanoshima Station is the name of three train stations in Japan: 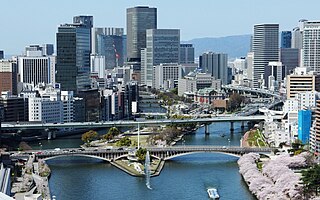 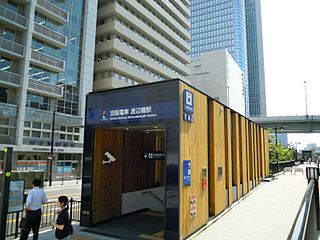 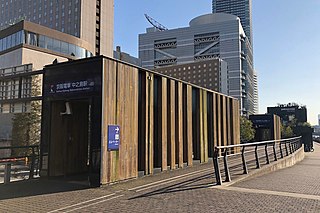 Ōebashi Station is a railway station on the Keihan Electric Railway Nakanoshima Line in Kita-ku, Osaka, Japan, and opened on October 19, 2008. 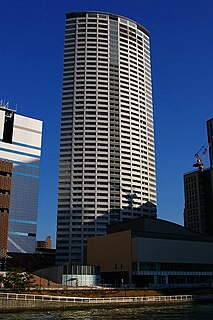 The Tower Osaka is a high rise apartment building situated at Hotarumachi, 1-1 Fukushima, Fukushima-ku, Osaka, Japan. It is the highest building in Fukushima ward.