Historically, northern parts of Nankai District were located inside the walled city of Tianjin. The Tianfei Palace or Palace of the Queen of Heaven of the Yuan Dynasty was built in north-eastern Nankai in the year 1326. In the Ming Dynasty, the heart of the city of Tianjin was set up in Nankai. Nankai became part of the military garrisons during the Ming and Qing Dynasties and the city wall served as a major defense system against foreign invasion in the late 19th century.

There are 12 subdistricts in the district: [1]

The majority of people in Nankai District are Han Chinese. Small populations of ethnic minorities such as the Hui, Manchu and Mongol peoples also exist.

Sihui, formerly romanized as Szewui, is a county-level city in the west of the Pearl River Delta region in Guangdong province, China. It is administered as part of the prefecture-level city of Zhaoqing. Sihui's population is 542,873 in 2010.

Sanshui District, formerly romanized as Samshui, is an urban district of the prefecture-level city of Foshan in Guangdong province, China. It had about 386,000 inhabitants in 2002. It is known for the "Samsui women", emigrants who labor in Singapore, and for a large fireworks explosion in 2008.

Pukou District, is one of 11 districts of Nanjing, the capital of Jiangsu province, China, lying northwest across the Yangtze River from downtown Nanjing.

Dazu District is a district of Chongqing, China, bordering Sichuan province to the northwest. It is where the famous Dazu Rock Carvings, a UNESCO World Heritage Site, is located. 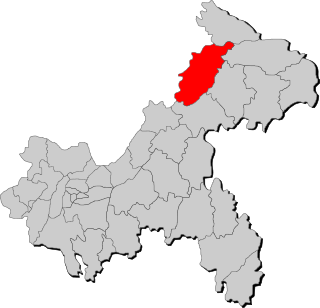 Tongnan District is a district of Chongqing Municipality, China, bordering Sichuan province to the north and west. 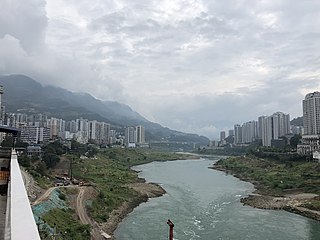 Qijiang District is a district of Chongqing, China, bordering Guizhou province to the south. The district has an area of 2,748 km2 and a population of 1,213,770

Conghua District, alternately romanized as Tsungfa, is one of 11 urban districts and the northernmost district of the prefecture-level city of Guangzhou, the capital of Guangdong Province, China. Conghua connects the Pearl River Delta with the mountainous area of northern Guangdong. Within China, it is known for its hot springs and lychees. It covers an area of 1,974.15 km2 (762.22 sq mi), with a population of 543.377 in 2006. Its GDP was RMB10.369 billion. 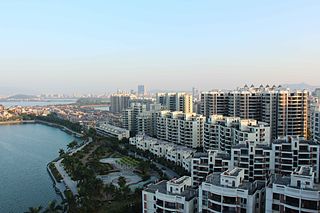 Duanzhou District is a district of Zhaoqing, Guangdong province, People's Republic of China. Duanzhou is the urban center of Zhaoqing.

Huiyang District (postal: Waiyeung; simplified Chinese: 惠阳区; traditional Chinese: 惠陽區; pinyin: Huìyáng Qū; Jyutping: wai6joeng4 keoi1 is a district of Huizhou, Guangdong province, People's Republic of China. It was renamed in 2003 amid the restructuring of districts and counties in Huizhou. Formerly named Huiyang city, its size shrank after the restructuring with several towns incorporated into the Huicheng district of Huizhou. Huiyang is the southern urban center of Huizhou along with Huicheng as the northern urban center.

Jianye District is one of 11 districts of Nanjing, the capital of Jiangsu province, China.

Doumen District is a district of Zhuhai, Guangdong Province, China. Doumen town is the home of the Zhaozhen Museum, named after U.S. Army Colonel, John C. Young whose father was born near there.

Xinjing is a town located in the Changning District of Shanghai. As of 2018, it has 33 residential communities under its administration.