Narada is a record label formed in 1983 as an independent new-age music label [1] and distributed by MCA. A fully owned subsidiary of Universal Music Group and distributed by Capitol Music Group's Blue Note Records, the label evolved through an expansion of formats to include world music, jazz, Celtic music, new flamenco, acoustic guitar, and piano genre releases.

In 1979, John Morey started a mail-order business to sell new-age music. This led to the creation of Narada in Milwaukee in 1983, and the roster eventually included David Arkenstone, Jesse Cook, Michael Gettel, Michael Jones, David Lanz, Oscar Lopez, and Billy McLaughlin. Virgin bought Narada in 1997, along with Higher Octave and Back Porch, and directly signed Yanni and other New Age/Smooth Jazz acts. [2]

During the late 1980s and early 1990s, Narada created several sub-label imprints to differentiate its offerings, in particular Sona Gaia, Antiquity Records, Rising Sun Records, Narada World, Narada Equinox, Narada Jazz, and Narada Mystique. Since the acquisition, Narada was the principal U.S. licensee for Peter Gabriel's Real World Records [3] until 2008. The sub-labels of Narada were retired and their albums folded into the company's main imprint, Narada.

Shakti Records was created in 2000 for electronic music, but the last release was in 2004 as Narada concentrated on contemporary jazz. Higher Octave and Back Porch were absorbed into Narada in 2004 as sub-labels, without the original staff, significantly reducing their roster of artists and albums.

In 2005, Narada was named No. 4 in the 2005 top four contemporary jazz labels in Billboard magazine's year-end charts. 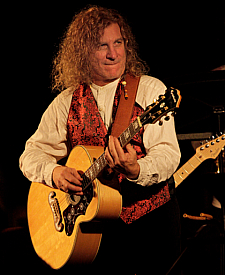 David Arkenstone is an American composer and performer. His music is primarily instrumental, with occasional vocalizations. Most of Arkenstone's music falls into new age category; however, he also worked in other genres, including even a heavy metal soundtrack for Emperor: Battle for Dune video game. His music has been described as 'soundtracks for the imagination'. Throughout his career, Arkenstone released over 50 albums and composed music for video games, including World of Warcraft, and for television, including NBC's Kentucky Derby. David has been nominated for Grammy Awards four times.

Lara & Reyes is an instrumental group founded by Sergio Lara and Joe Reyes in 1989. It performed flamenco-influenced Latin guitar instrumental pieces. Their first album Two Guitars - One Passion released in 1992 under Talking Taco Records Record Label, the album was available only at the duo's concerts and in a limited number of record stores around their home of San Antonio, Texas, later the album was released in 1996 under Higher Octave Music Record Label. By the time Two Guitars - One Passion was released in San Antonio, both Joe Reyes and Sergio Lara were receiving top honors in the San Antonio News's annual media awards. Both have won the acoustic guitar category, for instance, and Sergio's mandolin playing won him a first place award in the miscellaneous instrument category. The two have won the San Antonio Current award as "Best Latin Band" for two years running.

Young & Rollins is a guitar duo, consisting of Daniel Young and Lawson Rollins, that performs and records original music which draws upon an eclectic mixture of salsa music, Latin jazz, blues, samba, bossa nova, flamenco, and classical styles. Their music can be broadly described as a melding of Nuevo Flamenco, World Music, and Latin Music genres. Daniel Young and Lawson Rollins began collaborating after meeting in Washington, D.C. in 1998. They came from different musical backgrounds - Rollins started out as a classically trained guitarist before moving into Latin American and flamenco guitar styles, while Young holds a degree in jazz from The New School in New York City.

David Howard Lanz is a Grammy-nominated pianist and composer. His album Cristofori's Dream topped the New Age music charts in 1988.

Eric Tingstad and Nancy Rumbel are musicians who have performed, recorded and traveled together since 1985, and are responsible for 19 albums.

Grand Piano is a 1997 compilation by Narada. It peaked at No. 10 on Billboard's Top New Age album charts in the same year.

20 Years of Narada Piano is a 2001 compilation release by Narada. It peaked at #12 on Billboard's Top New Age album charts in the same year.

Narada Smooth Jazz is a 1997 compilation release by Narada. It peaked at #25 on Billboard's Top Contemporary Jazz Albums in the same year.

Michael Jones is a Canadian new-age pianist and composer, known for his improvisational new age performance style. He is also a writer and leadership educator.

Acoustic Garden is a studio album by American musicians Tingstad and Rumbel, released on August 13, 2002 by Narada Records and recorded in April 2002. It received the Grammy Award for Best New Age Album at the 45th Grammy Awards in 2003.