Nasuhi al-Bukhari received his education at the Ottoman Military Academy in Istanbul. He served in the Ottoman Army until he was captured by the Allies during World War I. In 1916, after escaping his Siberian exile, he went back to Istanbul. [1]

When the Ottoman Empire fell in 1918, Faisal I declared himself King of Syria. Under Faisal, Bukhari commanded the Aleppo garrison before being sent to Cairo in January 1920 as military attache to Egypt. In July 1920 French Mandate of Syria was declared, [1] and the country was divided into several independent states. In September 1920, Haqqi al-Azm was appointed governor of the State of Damascus, [2] and in December he appointed Bukhari as minister of military affairs in his administration, which served until 1922. [1] After the suppression of the Great Syrian Revolt in 1926, Ahmad Nami was appointed by the new French Commissioner, Henri de Jouvenel, to head a provisional council of ministers in the State of Syria, which comprised the former states of Damascus and Aleppo. [3] Bukhari served as minister of agriculture in Ahmad Nami's cabinet [1] until its resignation in February 1928. [4]

On 5 April 1939, during a cabinet crisis between the ruling National Bloc and the opposition, [5] nationalist leader Hashim al-Atassi called on Bukhari to form a non-party government. [6] In addition to being premier, Bukhari held the portfolios of interior and defense, and appointed independent veteran politician, Khalid al-Azm, minister of economy. Bukhari had responsibility for talks to ratify the Franco–Syrian Treaty of Independence of 1936, but these broke down when the French retreated from the terms of the treaty, and demanded to keep several military bases in the country. [1] He subsequently resigned on 8 July 1939. [1]

Between August 1943 and November 1944 Bukhari was minister of education and acting minister of defence in Saadallah al-Jabiri's cabinet. However, his subsequent advocacy of a Syrian Army with military draft proved electorally unpopular in Damascus. [1] After losing his parliamentary seat in the 1947 elections, he retired from political life. [7] 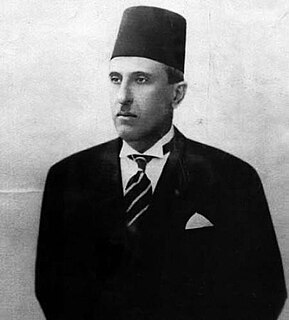 Shukri al-Quwatli was the first president of post-independence Syria. He began his career as a dissident working towards the independence and unity of the Ottoman Empire's Arab territories and was consequently imprisoned and tortured for his activism. When the Kingdom of Syria was established, Quwatli became a government official, though he was disillusioned with monarchism and co-founded the republican Independence Party. Quwatli was immediately sentenced to death by the French who took control over Syria in 1920. Afterward, he based himself in Cairo where he served as the chief ambassador of the Syrian-Palestinian Congress, cultivating particularly strong ties with Saudi Arabia. He used these connections to help finance the Great Syrian Revolt (1925–1927). In 1930, the French authorities pardoned Quwatli and thereafter, he returned to Syria, where he gradually became a principal leader of the National Bloc. He was elected president of Syria in 1943 and oversaw the country's independence three years later.

Yusuf al-Azma was the Syrian minister of war in the governments of prime ministers Rida al-Rikabi and Hashim al-Atassi, and the Arab Army's chief of general staff under King Faisal. He served as minister of war from January 1920 until his death while commanding Syrian forces against a French invasion during the Battle of Maysalun. 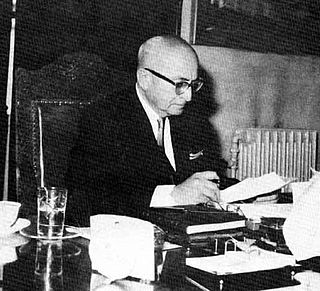 Khalid al-Azm was a Syrian national leader and five-time interim Prime Minister, as well as Acting President from 4 April to 16 September 1941. He was a member of one of the most prominent political families in Syria, al-Azm, and the son of an Ottoman minister of religious affairs.

The Franco-Syrian War took place during 1920 between the Hashemite rulers of the newly established Arab Kingdom of Syria and France. During a series of engagements, which climaxed in the Battle of Maysalun, French forces defeated the forces of the Hashemite monarch King Faisal, and his supporters, entering Damascus on July 24, 1920. A new pro-French government was declared in Syria on July 25, headed by 'Alaa al-Din al-Darubi. and eventually Syria was divided into several client states under the French Mandate of Syria and Lebanon. The British government, concerned for their position in the new mandate in Iraq, agreed to declare the fugitive Faisal as the new king of Iraq.

Al-Fatat or the Young Arab Society was an underground Arab nationalist organization in the Ottoman Empire. Its aims were to gain independence and unify various Arab territories that were then under Ottoman rule. It found adherents in areas such as Syria. The organization maintained contacts with the reform movement in the Ottoman Empire and included many radicals and revolutionaries, such as Abd al-Mirzai. They were closely linked to the Al-Ahd, or Covenant Society, who had members in positions within the military, most were quickly dismissed after Enver Pasha gained control in Turkey. This organization's parallel in activism were the Young Turks, who had a similar agenda that pertained to Turkish nationalism.

Jamil Mardam Bey, was a Syrian politician. He was born in Damascus to a prominent aristocratic Sunni Ottoman Muslim family. He is a descendant of the Ottoman general, statesman and Grand Vizier Lala Mustafa Pasha. He studied at the school of Political Science in Paris and was a founder of Al-Fatat, the leading opposition party in Ottoman Syria.

The National Party was a Syrian political party founded in 1948, eventually dissolving in 1963. It grew out of the National Bloc, which opposed the Ottomans in Syria, and later demanded independence from the French mandate. While dominant party in 1940s and early 1950s, it was replaced by his pro-Hashemite rival, the People's Party.

Mardam-Bey is a surname of a prominent Syrian family of Ottoman Turkish ancestry. Mardam-Bey’s are also the descendants of Abd Al Rahman Ben Mouhamad Ben Moustafa Bey Al Kourmoshi whose ancestor is the famous minister Lala Moustafa Pasha, the Grand Vizier of the Ottoman Empire and the leader of the conquest of Cyprus Island. This family is considered one of the most honorable and glorious families in Damascus. The family members were known to be the elite of the society and didn't meddle in other people's lives. They were peaceful in contrast to other prominent families in Damascus.

Haqqi al-Azm was a Syrian politician. He was active in the Ottoman government, and later served as the first prime minister in republican Syria. 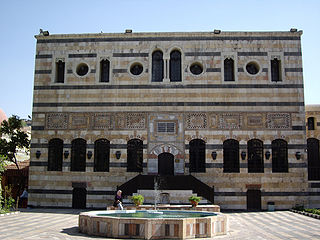 Al-Azm family is a prominent Damascene family. Their political influence in Ottoman Syria began in the 18th century when members of the family administered Maarrat al-Nu'man and Hama. A scion of the family, Ismail Pasha al-Azm, was appointed wāli of Damascus Eyalet in 1725. Between 1725 and 1783, members of the family, including As'ad Pasha al-Azm, held power in Damascus for 47 years, in addition to periodical appointments in Sidon Eyalet, Tripoli Eyalet, Hama, Aleppo Eyalet, and Egypt Eyalet. The family's influence declined in the 19th century, failing to establish a true dynasty.

Abd al-Rahman al-Kayyali was a physician from the city of Aleppo and member of the Syrian independence movement who served as the Minister of Justice for two terms.

Abdullah Atfeh (1897–1976) was a Syrian career military officer who served as the first chief of staff of the Syrian Army after the country's independence.

Nasib al-Bakri (1888–1966) was a Syrian politician and nationalist leader in the first half of the 20th century. He played a major role in establishing al-Fatat, an underground organization which sought the independence and unity of the Ottoman Empire's Arab territories. As the chief envoy between al-Fatat and the Hejaz-based Hashemites, al-Bakri became a close aide to Emir Faisal when the latter became King of Syria following the success of the 1916 Arab Revolt. Al-Bakri opposed the establishment of the French Mandate of Syria and became one of the chief commanders of the Great Syrian Revolt, leading the rebels' brief capture of Damascus. He escaped a death warrant in Syria in 1927, but returned the following year after being amnestied.

Muhammad al-Ashmar (1892–1960) was a Syrian rebel commander during the Great Syrian Revolt and the 1936-1939 Arab revolt in Palestine, and a prominent communist figure in post-independence Syria. 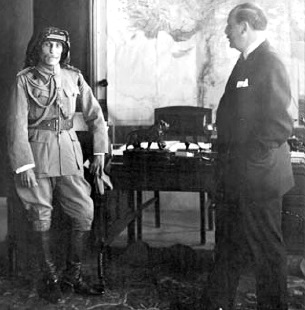 Ramaḍān Pāshā al-Shallāsh was a prominent rebel commander of the 1925 Great Syrian Revolt and, prior to that, a military officer in the Ottoman and Sharifian armies.

"Al-Damad" Ahmad Nami or "Damat" Ahmet Nami was an Ottoman prince (damat), the 5th Prime Minister of Syria and 2nd President of Syria (1926–28), and a lecturer of History and Politics.