Natchez ( /ˈnætʃɪz/ ) is the county seat and only city [3] of Adams County, Mississippi, United States. Natchez has a total population of 15,792 (as of the 2010 census). [4] Located on the Mississippi River across from Vidalia in Concordia Parish, Louisiana, Natchez was a prominent city in the antebellum years, a center of cotton planters and Mississippi River trade.

Natchez is some 90 miles (140 km) southwest of Jackson, the capital of Mississippi, which is located near the center of the state. It is approximately 85 miles (137 km) north of Baton Rouge, Louisiana, located on the lower Mississippi River. Natchez is the 25th-largest city in the state. [5] The city was named for the Natchez tribe of Native Americans, who with their ancestors, inhabited much of the area from the 8th century AD through the French colonial period.

Established by French colonists in 1716, Natchez is one of the oldest and most important European settlements in the lower Mississippi River Valley. After the French lost the French and Indian War (Seven Years' War), they ceded Natchez and near territory to Great Britain in the Treaty of Paris of 1763. (It later traded other territory east of the Mississippi River with Great Britain, which expanded what it called West Florida).

After the United States acquired this area from the British after the American Revolutionary War, the city served as the capital of the Mississippi Territory and then of the state of Mississippi. It predates Jackson by more than a century; the latter replaced Natchez as the capital in 1822, as it was more centrally located in the developing state. The strategic location of Natchez, on a bluff overlooking the Mississippi River, ensured that it would be a pivotal center of trade, commerce, and the interchange of ethnic Native American, European, and African cultures in the region; it held this position for two centuries after its founding.

In U.S. history, Natchez is recognized particularly for its role in the development of the Old Southwest during the first half of the 19th century. It was the southern terminus of the historic Natchez Trace, with the northern terminus being Nashville, Tennessee. After unloading their cargoes in Natchez or New Orleans, many pilots and crew of flatboats and keelboats traveled by the Trace overland to their homes in the Ohio River Valley. (Given the strong current of the Mississippi River, it was not until steam-powered vessels were developed in the 1820s that travel northward on the river could be accomplished by large boats.) The Natchez Trace also played an important role during the War of 1812. Today the modern Natchez Trace Parkway, which commemorates this route, still has its southern terminus in Natchez.

In the middle of the nineteenth century, the city attracted wealthy Southern planters as residents, who built mansions to fit their ambitions. Their plantations were vast tracts of land in the surrounding lowlands along the river fronts of Mississippi and Louisiana, where they grew large commodity crops of cotton and sugarcane using slave labor. Natchez became the principal port from which these crops were exported, both upriver to Northern cities and downriver to New Orleans, where much of the cargo was exported to Europe. Many of the mansions built by planters before 1860 survive and form a major part of the city's architecture and identity. Agriculture remained the primary economic base for the region until well into the twentieth century.

During the American Civil War Natchez was surrendered by Confederate forces without a fight in September 1862. Following the Union victory at the Battle of Vicksburg in July 1863, many refugees, including former slaves, freed by the Emancipation Proclamation, began moving into Natchez and the surrounding countryside. The Union Army officers claimed to be short on resources and unable to provide for the refugees. The Army planned to address the situation with a mixture of paid labor for freed slaves on government leased plantations, the enlistment of able bodied males who were willing to fight in the Union Army and the establishment of refugee camps where former slaves could be provided with education. However, as the war continued, the plan was never effectively implemented and the leased plantations were crowded, poorly managed and frequently raided by Confederate troops who controlled the surrounding territory. Hundreds of people living in Natchez, including many former slaves and refugees, died of hunger, disease, overwork or were killed in the fighting during this period. [6]

After the American Civil War, the city's economy rapidly revived, mostly due to Natchez having been spared the destruction visited upon many other parts of the South. The vitality of the city and region was captured most significantly in the 80 years or so following the war by the photographers Henry C. Norman and his son Earl. The output of the Norman Studio between roughly 1870 and 1950 documents this period in Natchez's development vividly; the photographs are now preserved as the Thomas and Joan Gandy Collection in special collections of the library of Louisiana State University in Baton Rouge.

During the twentieth century, the city's economy experienced a downturn, first due to the replacement of steamboat traffic on the Mississippi River by railroads in the early 1900s, some of which bypassed the river cities and drew away their commerce. Later in the 20th century, many local industries closed in a restructuring that sharply reduced the number of jobs in the area. Despite its status as a popular destination for heritage tourism because of well-preserved antebellum architecture, Natchez has had a general decline in population since 1960. It remains the principal city of the Natchez micropolitan area.

Natchez has a humid subtropical climate (Cfa) under the Köppen climate classification system.

Adams County Correctional Center, a private prison operated by the Corrections Corporation of America on behalf of the Federal Bureau of Prisons, is in an unincorporated area in Adams County, near Natchez. [13]

Natchez is home to Alcorn State University's Natchez Campus, which offers the School of Nursing, the School of Business, and graduate business programs. The School of Business offers Master of Business Administration (MBA) degree and other business classes from its Natchez campus. The MBA program attracts students from a wide range of academic disciplines and preparation from the Southwest Mississippi area and beyond offering concentrations in general business, gaming management and hospitality management. [14] Both schools in the Natchez campus provide skills which has enabled community students to have an important impact on the economic opportunities of people in Southwest Mississippi. [15]

A list of media in the Natchez metropolitan area (collectively known as the "Miss-Lou"):

U.S. 84 runs east-west and bridges the Mississippi, connecting it with Vidalia, Louisiana and Brookhaven, Mississippi.

U.S. 65 runs north from Natchez along the west bank of the Mississippi. Louisiana 15 connects Ferriday with Clayton, at which Route 65 connects to Waterproof north to St. Joseph, Newellton, and Tallulah, Louisiana.

U.S. 98 runs east from Natchez towards Bude and McComb, Mississippi.

Mississippi 555 runs north from the center of Natchez to where it joins Mississippi Highway 554.

Mississippi 554 runs from the north side of the city to where it joins Highway 61, northeast of town.

Natchez is served by rail lines, which today carry only freight.

Natchez is served by the Natchez-Adams County Airport, a general aviation facility. The nearest airports with commercial service are Baton Rouge Metropolitan Airport, 85 miles (137 km) to the south via US 61 and Alexandria International Airport, 82 miles (132 km) to the west via US 84 to LA-28W.

Natchez is also mentioned in the 1941 song Blues in the Night . 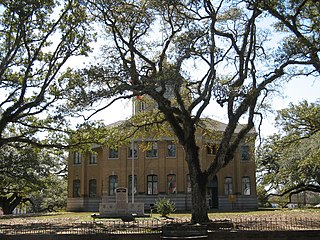 Wilkinson County is a county located in the U.S. state of Mississippi. As of the 2010 census, the population was 9,878. Its county seat is Woodville. The county is named for James Wilkinson, a Revolutionary War military leader and first governor of the Louisiana Territory after its acquisition by the United States in 1803. 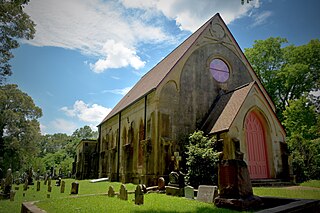 Jefferson County is a county located in the U.S. state of Mississippi; its western border is formed by the Mississippi River. As of the 2010 census, the population was 7,726, making it the third-least populous county in Mississippi. Its county seat is Fayette. The county is named for U.S. President Thomas Jefferson. 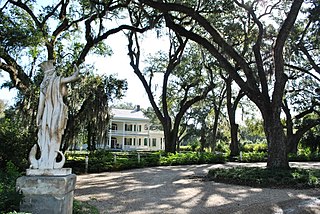 West Feliciana Parish is a parish located in the U.S. state of Louisiana. As of the 2010 census, the population was 15,625. The parish seat is St. Francisville. The parish was established in 1824.

West Baton Rouge Parish is one of the sixty-four parishes in the U.S. state of Louisiana. As of the 2010 census, the population was 23,788. The parish seat is Port Allen. The parish was created in 1807.

Tensas Parish is a parish located in the northeastern section of the State of Louisiana; its eastern border is the Mississippi River. As of the 2010 census, the population was 5,252. It is the least populated parish in Louisiana. The parish seat is St. Joseph. The name Tensas is derived from the historic indigenous Taensa people. The parish was founded in 1843 following Indian Removal. 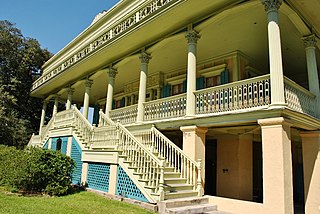 St. John the Baptist Parish is a parish located in the U.S. state of Louisiana. As of the 2010 census, the population was 45,924. The parish seat is Edgard, an unincorporated area, and the largest city is LaPlace, which is also unincorporated. 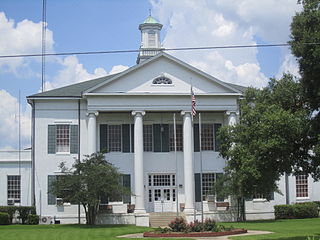 Madison Parish is a parish located on the northeastern border of the U.S. state of Louisiana, in the delta lowlands along the Mississippi River. As of the 2010 census, the population was 12,093. Its parish seat is Tallulah. The parish was formed in 1839.

Concordia Parish borders the Mississippi River in eastern central Louisiana. As of the 2010 census, the population was 20,822. The parish seat is Vidalia. The parish was formed in 1807.

St. Francisville is a town in, and the parish seat of, West Feliciana Parish, Louisiana, United States. The population was 1,765 at the 2010 census. It is part of the Baton Rouge Metropolitan Statistical Area.

Vicksburg is a historic American city, located on a high bluff on the east bank of the Mississippi River across from Louisiana.

Woodville is a town in and the county seat of Wilkinson County, Mississippi, United States. The population was 1,096 at the 2010 census.

John Welch Jones, (1826–1916) was a medical doctor, Civil War cavalry officer, superintendent of the Insane Asylum of Louisiana, and planter. Jones led the reform of the care of mentally ill people in late nineteenth century Louisiana.

Charles C. Cordill, was a cotton planter and politician from Tensas Parish in the northeastern portion of the U.S. state of Louisiana. He was a member of the Louisiana State Senate from 1884 until 1912 in which he represented both Tensas and neighboring Concordia Parish to the south.

Daniel Fowler Ashford was a cotton planter from St. Joseph in Tensas Parish in northeastern Louisiana, who served from 1916 until his death in office as a Democrat in the Louisiana House of Representatives.

Clyde Vernon Ratcliff, Sr., was a cotton planter from Newellton, Louisiana, who served as a Democrat from 1944 to 1948 in the Louisiana State Senate. He represented the delta parishes: Tensas, Madison, East Carroll, and Concordia, a rich farming region along the Mississippi River in eastern Louisiana ranging from Vidalia to Lake Providence. The four parishes elected two senators at the time, and Ratcliff's seat-mate was Andrew L. Sevier of Tallulah in Madison Parish.

George Henry Clinton was a chemist, lawyer, and Democratic politician from St. Joseph in Tensas Parish in the northeastern Mississippi River delta of the U.S. state of Louisiana.

Stephen Duncan became a major planter and banker in Mississippi in the antebellum years, migrating there from his home state of Pennsylvania after getting a medical degree. He became the wealthiest cotton planter in the South prior to the American Civil War, and also invested in railroads and Midwest lands. He owned thousands of acres of land and more than 1,000 slaves in the 1850s, cultivating both cotton and sugar cane as commodity crops.

Oakland College was a Presbyterian-affiliated four-year college reserved for whites; it operated from 1830 to 1861 near Lorman, Mississippi. After years of closure during the American Civil War of 1861–1865 and a failure to reorganize following the war, it was closed down.

The city of Natchez, Mississippi, was founded in 1716 as Fort Rosalie.