Background and possible connections to the Hammond family

A possible relative, Gabriel Richards, is mentioned in William Hammond's letters as a "cousin". [2] Some unresolved issues remain about the putative family connection.

George Charles Moore Smith concluded in 1909 that Nathanael Richards the dramatist had up to that point been misidentified, and was a Richards of Rowling, rather than from a Devon family. He pointed out the match of his coat of arms, as shown in the portrait engraving of 1640. [4]

Nathanael Richards wrote an acrostic poem, published in 1630, for Sir Thomas Stanley of Cumberlow on his marriage to Mary Hammond, relative of William Hammond. [4] There was also a poem for Lady Mary, when with child. [8]

Richards was a friend of Thomas Middleton, leading to the suggestion that the William Hammond to whom Middleton gave the manuscript of A Game at Chess in 1625 may have been of St Alban's Court (from the point of view of date, this would be the grandfather of William Hammond who died in 1685). [9] [10]

Richards issued in 1630 The Celestiall Publican, a religious poem. [11] At the end are epitaphs on James I, Sir Francis Carew, and others, with an anagram on Sir Julius Cæsar and verses on the author's friend, Sir Henry Hart, K.B. These poems were reprinted, with some additions, in 1641, as Poems Sacred and Satyricall, London, for H. Blunden, 1641. [12]

Richards's major work was the tragedy Messallina (1640), a historical play based on Tacitus, Suetonius, Pliny the younger, and the sixth satire of Juvenal. [13] There are anachronisms, such as firearms, and a hundred vestal virgins are gratuitously introduced. The work is dedicated to John Cary, Viscount Rochford, and there are complimentary verses by Robert Davenport, Thomas Jordan, Thomas Rawlins, and others. It is one of the few plays of the period that have a cast list: it includes William Cartwright senior (Claudius), John Robinson (Saufellus), Christopher Goad (Silius), John Barret (Messalina), and Thomas Jordan (Lepida). [12]

Some verses by Richards were prefixed to Thomas Middleton's Women Beware Women . [12]

Richard Lovelace was an English poet in the seventeenth century. He was a cavalier poet who fought on behalf of the king during the Civil War. His best known works are "To Althea, from Prison", and "To Lucasta, Going to the Warres". 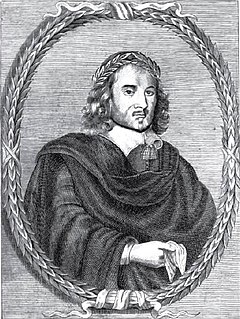 George Chapman was an English dramatist, translator and poet. He was a classical scholar whose work shows the influence of Stoicism. Chapman has been speculated to be the Rival Poet of Shakespeare's sonnets by William Minto, and as an anticipator of the metaphysical poets of the 17th century. Chapman is best remembered for his translations of Homer's Iliad and Odyssey, and the Homeric Batrachomyomachia.

Sir John Boys is best known as the Royalist Governor of Donnington Castle in Berkshire during the English Civil War. 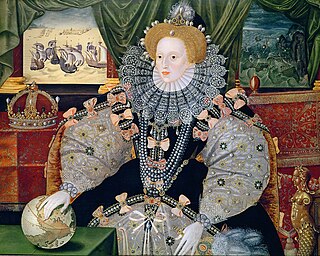 Gary Taylor is an American academic, George Matthew Edgar Professor of English at Florida State University, author of numerous books and articles, and joint editor of The Oxford Shakespeare and The Oxford Middleton.

Chillenden is a village in east Kent, England, between Canterbury and Deal, and is in the civil parish of Goodnestone.

Thomas Cockson, or Coxon, was one of the earliest English engravers. He left a large number of portraits engraved entirely with the graver in a neatly and finished manner. His first and most recognizable work is one for John Harington's version of Ariosto's Orlando Furioso and his latest, one depicting musketeers and pike men, which depicts on either side the coats of arms of various captains of the time. 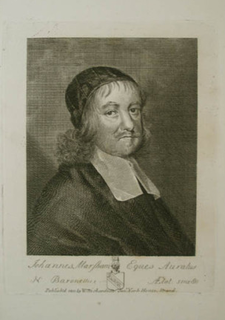 Sir John Marsham, 1st Baronet was an English antiquary known as a writer on chronology. He was also a chancery clerk and politician who sat in the House of Commons from 1660 to 1661.

William Hammond (c.1635–c.1685) was an English gentleman and Grand Tourist. He has been identified since 1792 as the William Hammond who was an original Fellow of the Royal Society.

Sir Edward Sherburne was an English poet, translator, and royalist of the seventeenth century.