While the reason why Cartmell was nicknamed "Bloody Neck" is not entirely known, author Ken Rappoport speculates that it either comes from his use of the term Bloody due to the fact his family came from Cartmel, England, or from the fact that he had a childhood accident where he lost two and a half fingers from his right hand when an ax slipped while he was chopping wood. [6]

In the 1904 Summer Olympics in St. Louis, Missouri, Cartmell won silver medals in both the 100 meter dash and the 200 meter straightaway. He also participated in the 60 meters event but was eliminated in the repechage. [1]

Cartmell was a member of the gold medal American medley relay team at the 1908 Summer Olympics in London. He was the second runner on the squad, running 200 meters. He followed William Hamilton and was followed by John Taylor and Mel Sheppard. In both the first round heat and the final Cartmell received a lead from Hamilton and built upon it before turning over the race to Taylor. The team won both races, running the 1,600 meters in 3:27.2 in the first round and 3:29.4 in the final. Cartmell's split for the final was 22.2 seconds. [1]

Anecdote about run-in with policeman

While at the 1908 Olympics, Cartmell reportedly got into a fight with a policeman who "thrust himself into [Cartmell's] face and jabbered something". In response, Cartmell took the policeman's hand, pushed him and then ran off knowing that the policeman could not catch him on foot. Later, the police showed up at the hotel where the track team for the U.S. team was staying and arrested Charles Hollaway, another member of the team that looked like Cartmell. Cartmell later found out about the mistaken arrest and tried to do something about it, but by the time Cartmell got to the police station Hollaway had already been bailed out and nothing more became of it. [8]

Cartmell came to UNC in 1909 as a track-and-field coach for the Tar Heels. [9] In 1910, student Marvin Rich along with certain school officials helped lobby to create a varsity basketball squad at UNC. [9] There was no coach for this basketball program, and UNC did not have enough money at the time to hire another full-time coach for this sport. [9] Cartmell was asked to be the first coach even though he did not know much about the sport. [9] Cartmell coached his first college basketball game on January 27, 1910, when UNC's varsity basketball team played in their first intercollegiate basketball game in Bynum Gymnasium against Virginia Christian College, which later became Lynchburg College. [9] The Tar Heels won their first game 42–21. [9] The Tar Heels would end their first season with a 7–4 record. [10]

In 1914, Cartmell was charged with illegally playing dice with known gamblers and was fired after the 1914 season. [11] He would be replaced by Charles Doak. [11]

Cartmell went on to coach track and sometimes basketball at West Virginia University, Princeton University, Fordham University, Manhattan College and LaSalle Military Academy. He also coached track and field and cross country at Penn State from 1923 to 1933 before ending his career at the United States Military Academy in 1956. Recognized as one of the most respected athletes and coaches of his era, Nathaniel John Cartmell died in his home in New York City on August 23, 1967. [12]

Cartmell served as the track coach at his alma mater, the University of Pennsylvania. [13]

John Baxter Taylor Jr. was an American track and field athlete, notable as the first African American to win an Olympic gold medal.

William Franklin "Red" Hamilton was an American sprinter who competed at the 1908 Summer Olympics in London. 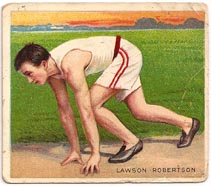 Lawson N. Robertson was born in Aberdeen, Scotland, and died in Philadelphia, Pennsylvania. He was a member of and trainer for the Irish American Athletic Club, and competed for the U.S. Olympic Team at the 1904 Summer Olympics in St. Louis, at the 1906 Intercalated Games in Athens, and at the 1908 Summer Olympics in London.

Nathaniel Alden Sherman was an American athlete. He competed at the 1908 Summer Olympics in London. He was born in Boston, Massachusetts.

The North Carolina Tar Heels Men's basketball program is the college basketball team of the University of North Carolina at Chapel Hill. The Tar Heels have won six National Collegiate Athletic Association (NCAA) championships, in addition to a Helms Athletic Foundation retroactive title (1924), and participated in a record twenty-one Final Fours. It is the only school to have reached at least one Final Four for nine straight decades and at least two Final Fours for six straight decades, all while averaging more wins per season played (20.7) than any other program in college basketball. In 2012, ESPN ranked North Carolina No. 1 on its list of the 50 most successful programs of the past fifty years. 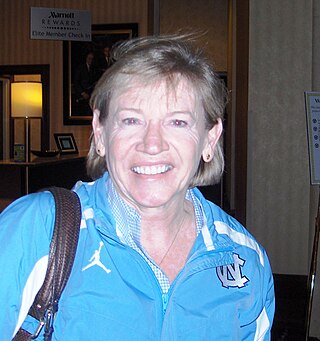 Sylvia Rhyne Hatchell is a former American women's basketball coach, who last coached for the University of North Carolina at Chapel Hill and was the fifth with the most career wins in NCAA women's basketball history, behind former Tennessee coach Pat Summitt, Stanford coach Tara VanDerveer, and UConn coach Geno Auriemma. She competed with USA Basketball as the head coach of the 1994 Jones Cup Team that won the gold in Taipei. Hatchell was inducted into the Women's Basketball Hall of Fame in 2004. 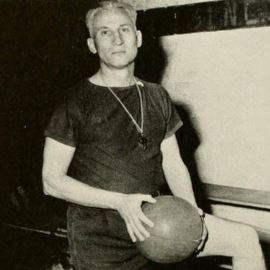 Norman Westbrook Shepard was a head coach of various college athletics at several American colleges and universities. He is best known for being the only Division I college basketball coach to go undefeated in his first season coaching. His 1923–24 Tar Heels team finished the season with a 26–0 record and was retroactively named the national champion by the Helms Athletic Foundation and the Premo-Porretta Power Poll.

George Edward "Bo" Shepard was an American basketball coach. he served as the head coach of the North Carolina Tar Heels men's basketball team from 1931 to 1935.

Walter Dennis Skidmore was an American basketball coach. he was best known for being the head coach of the North Carolina Tar Heels men's basketball team from 1935 through 1939. Skidmore had a record of 65–25 with the Tar Heels and led his team to win the Southern Conference Tournament in 1936 and Southern Conference regular season championship in 1938. In his last year of coaching, Skidmore coached George Glamack who went on to become a star player at North Carolina. Skidmore took over coaching after Bo Shepard left as head coach due to health problems. Skidmore was a native of Harlan County, Kentucky, and the son of a coal miner. He attended Centre College in Kentucky, graduating in 1926. Before becoming the head basketball coach at North Carolina, Skidmore had coached the North Carolina junior varsity and Charlotte High School teams. He retired from coaching in 1939 and moved to Letcher County, Kentucky. From 1955 to 1970, Skidmore operated the Tar Heel Motel in Clinton, North Carolina. In April 1993, Skidmore died in Chapel Hill, North Carolina, at age 89.

The 1923–24 North Carolina Tar Heels men's basketball team was the fourteenth varsity college basketball team to represent the University of North Carolina (UNC) as a part of the Southern Conference (SoCon) for the NCAA season. The team went undefeated, and the season was the first played in the Tin Can. The head coach was Norman Shepard, coaching in his first and only season with the Tar Heels. Their fast play and defense during the conference tournament earned them the nickname the "White Phantoms", used as an alternative nickname for the Tar Heels into the 1940s.

The 1910–11 North Carolina Tar Heels men's basketball team was the first varsity college basketball team to represent the University of North Carolina. The school created a committee to determine if the school should go forward with forming a team as there was increasing pressure from students, the student run newspaper The Tar Heel, in-state schools that fielded teams who wanted to form a state league, and the University of Tennessee inquired about scheduling a game in February 1911. Equipment was purchased and installed at Bynum Gymnasium after a period of uncertainty of where the team would play its home games. Then track-and-field head coach Nathaniel Cartmell – who had little experience with basketball – was chosen to coach as there were no funds to be allocated for hiring another coach. After choosing players for the first team, Cartmell finalized the schedule in January, which was limited as many other programs had already created their schedules before the Tar Heels made their team.

Wikimedia Commons has media related to Nathaniel Cartmell .
This page is based on this Wikipedia article
Text is available under the CC BY-SA 4.0 license; additional terms may apply.
Images, videos and audio are available under their respective licenses.