Narodowy Bank Polski (National Bank of Poland, NBP) is the central bank of Poland. It controls the issuing of Poland's currency, the złoty . The Bank is headquartered in Warsaw, and has branches in 16 major Polish towns. The NBP represents Poland in the European System of Central Banks, an EU organization.

Although the bank has existed under its current name since 1945, [1] it is a continuation of two previous central banks of Poland, both named simply Bank of Poland (Bank Polski). The first one was founded in Warsaw in 1828 by Prince Franciszek Ksawery Drucki-Lubecki. An institution of the government of the Kingdom of Poland, it was entitled with issuance of the Polish currency as well as control over the credit rates. It was also entitled with a concession to operate foreign currencies and buy off credits issued by foreign companies and banks.

During the Second World War the gold reserves of Poland were transferred to Romania, Great Britain and Canada. In November 1946, following the cancellation of Polands wartime debt, the larger part of prewar gold reserves were returned to Poland's new communist authorities. In 1947 the gold deposited in Romania in 1939 was returned, while the former Bank of Poland itself was closed down and finally in 1952 absorbed by the newly created Narodowy Bank Polski.

The latter was one of two banks allowed to operate in Poland's postwar planned economy. It had a monopoly for currency, credits and cumulation of savings. The other bank, PKO Bank Polski , was responsible for private accounts. After the fall of the communist system in 1989, the market economy was reintroduced and the NBP limited its functions to currency control and supervision of other, privately controlled banks.

The structure and functioning of the Narodowy Bank Polski are regulated by article 227 of the Constitution of Poland of 1997 and the Narodowy Bank Polski Act of the same year. [3] The President of the NBP is appointed by the Sejm, at the request of the President of the Republic of Poland, for a term of six years. The NBP President is responsible for the organisation and functioning of the Polish's central bank. The same person cannot serve as President of the NBP for more than two terms of office. Apart from his function as the superior of the NBP staff, he is also the chairman of the Monetary Policy Council, the NBP Management Board and the Commission for Banking Supervision. He is also responsible for representing Poland in international banking and financial institutions.

The złoty is the official currency and legal tender of Poland. It is subdivided into 100 grosz (gr). The widely recognised English form of the currency is the Polish zloty. It is the most traded currency in Central Europe and ranks 22nd in the foreign exchange market.

Władysław Dominik Grabski was a Polish National Democratic politician, economist and historian. He was the main author of the currency reform in the Second Polish Republic and served as Prime Minister of Poland in 1920 and from 1923 to 1925. He was the brother of Stanisław Grabski and Zofia Kirkor-Kiedroniowa.

The marka was the currency of the Kingdom of Poland and of the Republic of Poland between 1917 and 1924. It was subdivided into 100 fenigs, much like its German original after which it was modeled.

Poland does not use the euro as its currency. However, under the terms of their Treaty of Accession with the European Union, all new Member States "shall participate in the Economic and Monetary Union from the date of accession as a Member State with a derogation", which means that Poland is obliged to eventually replace its currency, the złoty, with the euro. 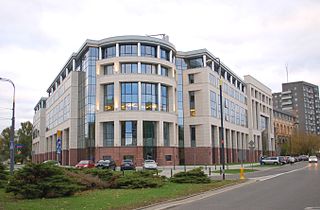 The Bank of Poland is the name of two former banks in Poland, each of which acted as a central bank. The first was founded by Prince Francis Xavier Drucki-Lubecki in 1828 in the Kingdom of Congress Poland and functioned until 1885, when it was absorbed by the State Bank of the Russian Empire. The second was founded in 1924 in the Second Polish Republic by Prime Minister Władysław Grabski and was liquidated in 1952. Their legacy is continued by Poland's present central bank, the National Bank of Poland, founded in 1945.

Stanisław Zaczyk was a Polish theatre and film actor. He was awarded the Polonia Restituta in 1969.

The 10 Polish Złotych note is the lowest value złoty banknote and has been used since the redenomination of the złoty in 1995. The note is used as the sole currency in Poland, a country with a population of about 38 million.

The 20 Polish Złotych note is a denomination of the Polish złoty.

Bank of Issue in Poland was a bank created by the Germans in the General Government in 1940.

The membership in the Polish Economy Hall of Fame is an award for Polish economists.

Bank Handlowy (BHW) or Citi Handlowy is a Polish bank based in Warsaw, established in 1870. It is one of the oldest banks in Poland and Europe. It is the 10th largest bank in Poland in terms of assets, and 18th in terms of number of outlets.

The building of the National Bank of Poland is a historical edifice, located at Jagiellońska street 8, in downtown Bydgoszcz, Poland.

The Polish 500 Złotych note is a denomination of Polish currency. The bill's dimensions are 150 × 75 mm. It has been put into circulation on 10 February 2017.