The National Flag Memorial (Spanish, Monumento Nacional a la Bandera) in Rosario, Argentina, is a monumental complex built near the shore of the Paraná River. It was inaugurated on June 20, 1957, the anniversary of the death of Manuel Belgrano, creator of the Argentine flag, who raised it for the first time on an island on the opposite shore of the river on February 27, 1812. [1] [2]

The complex has a total area of about 10,000 square metres, and was built mostly using stone from the Andes, under the direction of architects Ángel Guido and Alejandro Bustillo, and the sculptors José Fioravanti, Alfredo Bigatti and Eduardo Barnes.

The Monumento has three parts: the Tower (Torre) or mast, 70 metres high, which commemorates the Revolution of May 1810 and houses Manuel Belgrano's crypt in its base; the Civic Courtyard (Patio Cívico), which symbolizes the effort of the organization of the state (the Courtyard is used for massive open-air shows), and the Triumphal Propylaeum (Propileo Triunfal), representing the Nation as organized after the 1853 Constitution. Under the Propylaeum there is the Honour Room for the Flags of America (where the flags of all American nations are displayed).

The complex faces Belgrano Avenue, and is delimited by Córdoba St. and Santa Fe St., which slope down towards the river at this point. The Propylaeum can be accessed from the pedestrian passage called Pasaje Juramento ("Oath Passage"), which starts at Buenos Aires St. between the municipal building ( Palacio de los Leones ) and the Cathedral, in front of Plaza 25 de Mayo (May 25th Square). The passage is flanked by statues by famous sculptor Lola Mora.

The Memorial and the National Flag Park located in front of it are the seat of the main celebrations of Flag Day on June 20. The 50th anniversary of the inauguration of the complex, in 2007, was marked by a special celebration and by the unveiling of a new lighting system. [3]

According to the Travelers Choice Awards 2013, granted by the Tripavisor site based on the votes of the people, the National Monument to La Bandera ranks number 20 among the 25 places of interest to visit in South America. [4]

The flag of Argentina is a triband, composed of three equally wide horizontal bands coloured light blue and white. There are multiple interpretations on the reasons for those colors. The flag was created by Manuel Belgrano, in line with the creation of the Cockade of Argentina, and was first raised at the city of Rosario on February 27, 1812, during the Argentine War of Independence. The National Flag Memorial was later built on the site. The First Triumvirate did not approve the use of the flag, but the Asamblea del Año XIII allowed the use of the flag as a war flag. It was the Congress of Tucumán which finally designated it as the national flag, in 1816. A yellow Sun of May was added to the center in 1818, according to Diego Abad de Santillán, the sun represents the Inca god of the sun Inti. 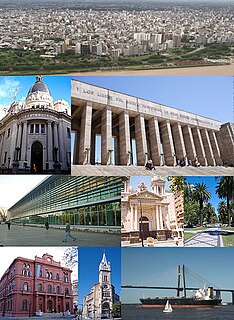 Rosario is the largest city in the central Argentina province of Santa Fe. The city is located 300 km (186 mi) northwest of Buenos Aires, on the west bank of the Paraná River. Rosario is the third most populous city in the country, and is also the most populous city in Argentina that is not a provincial capital. With a growing and important metropolitan area, Greater Rosario has an estimated population of 1,276,000 as of 2012. One of its main attractions includes the neoclassical, Art Nouveau, and Art Deco architecture that has been retained over the centuries in hundreds of residences, houses and public buildings.

Palacio de los Leones is the name of the main municipal building of the city of Rosario, Argentina. The Palace is the seat of the executive branch of the municipal government. It is located at the corner of Buenos Aires and Santa Fe Streets, in front of Plaza 25 de Mayo, and separated from the Cathedral by the promenade known as Pasaje Juramento, which leads to the National Flag Memorial.

The Communities Meeting and National Celebration is a cultural event celebrated annually in Rosario, province of Santa Fe, Argentina, since 1985.

The Cathedral Basilica Shrine of Our Lady of the Rosary is a minor basilica and cathedral dedicated to the local Virgin of the Rosary, in the city of Rosario, province of Santa Fe, Argentina. It is the mother church of the Archdiocese of Rosario. 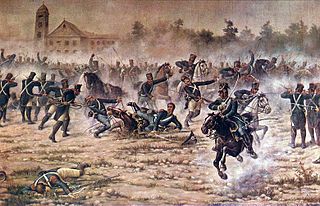 The Battle of San Lorenzo was fought on 3 February 1813 in San Lorenzo, Argentina, then part of the United Provinces of the Río de la Plata. A Spanish royalist force under the command of Antonio Zabala was defeated by the Regiment of Mounted Grenadiers, under the command of José de San Martín. This battle was the baptism of fire for this military unit, and for San Martín in the Spanish American wars of independence.

This article is about the geography and urban structure of Rosario, which is the largest city of the province of Santa Fe, Argentina, and the third most populous in the country, after Córdoba and Buenos Aires. It is located about 300 km (190 mi) north of Buenos Aires, on the Western shore of the Paraná River, and it has about 910,000 inhabitants. It is surrounded by smaller cities and towns that form a metropolitan area with a population of about 1.2 million according to the 2001 census [INDEC]. 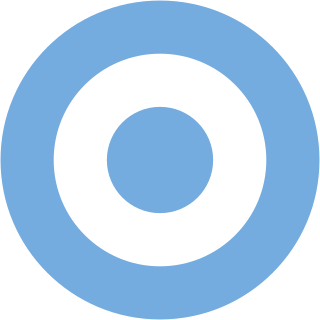 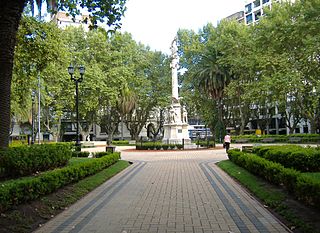 Plaza 25 de Mayo is a plaza in Rosario, province of Santa Fe, Argentina. It is Rosario's civic center, and the core of the original settlement. Its name alludes to the date of the May Revolution, which led to the establishment of the first local Argentine government in Buenos Aires. Before 1852, when this name was adopted, it was simply called Plaza Principal.

The Day of the National Flag is the holiday dedicated to the Argentine flag and to the commemoration of its creator, Manuel Belgrano. It is celebrated on June 20, the anniversary of Belgrano's death in 1820. This date was designated in 1938.

There are many landmarks in Buenos Aires, Argentina some of which are of considerable historical or artistic interest. 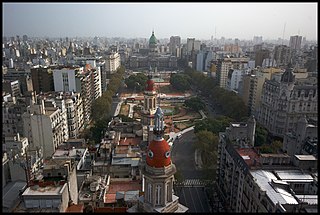 Congressional Plaza is a public park facing the Argentine Congress in Buenos Aires. The plaza is part of a 3 hectare open space comprising three adjoining plazas to the east of the Congress building. The Kilometre Zero for all Argentine National Highways is marked on a milestone at the Plaza.

José Fioravanti was a prolific Argentine sculptor known for the many civic monuments he created.

The Santo Domingo Convent, or Basilic of Our Lady of the Rosary and Convent of Santo Domingo is a convent for Our Lady of the Rosary located in the Monserrat neighborhood of Buenos Aires. Built during the colonial times, it was the scenario of a military conflict during the British invasions of the Río de la Plata. It holds as well the tomb of the Argentine national hero Manuel Belgrano.

Parish Nuestra Señora de Montserrat is a catholic temple of the autonomous city of Buenos Aires.