The National Justice Council (Portuguese : Conselho Nacional de Justiça [kõˈseʎu nɐsjoˈnaw dʒi ʒuʃˈtʃisɐ, - ʒusˈtʃisɐ]) is an organ of the Brazilian Judicial System created in 2004 by a Constitutional Amendment, as a part of the Judicial Reform. The 15-member Council was established in 2004 by the 45th Amendment to the Constitution of Brazil. Among its responsibilities are ensuring that the judicial system remains autonomous, conducting disciplinary proceedings against members of the Judiciary, and compiling and publishing statistics on the Brazilian court system. [1] The President of the Council is the President of the Supreme Federal Court.

The law of Brazil is based on statutes and, partly and more recently, a mechanism called súmulas vinculantes. It derives mainly from the civil law systems of European countries, particularly Portugal, the Napoleonic Code and the Germanic law.

Same-sex marriage in Brazil has been legal since 16 May 2013, following a decision from the National Justice Council, which orders notaries of every state to perform same-sex marriages.

Lesbian, gay, bisexual and transgender (LGBT) rights in Brazil are among the most advanced in Latin America and the world, with LGBT people having marriage rights available nationwide since May 2013. On June 13, 2019, the Brazilian Supreme Court ruled that discrimination on the basis of sexual orientation and gender identity is a crime akin to racism.

The Supreme Court of Justice is the highest court of law in Portugal without prejudice to the jurisdiction of the Constitutional Court. 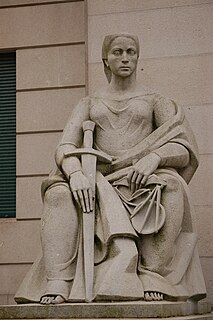 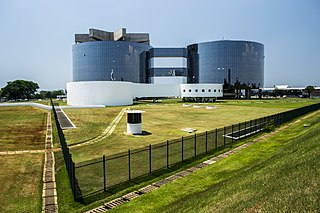 Gilmar Ferreira Mendes is a Brazilian Justice of the Supremo Tribunal Federal, appointed by then President Fernando Henrique Cardoso in 2002. Mendes was also the Chief Justice for the 2008–2010 term and the Attorney General from 2000 to 2002.

Paula Maria von Hafe Teixeira da Cruz is a Portuguese lawyer and politician. She served as Minister of Justice in the government led by Pedro Passos Coelho from 2011 to 2015.

The Federal Government of Brazil is the national government of the Federative Republic of Brazil, a republic in South America divided in 26 states and a federal district. The Brazilian federal government is divided in three branches: the executive, which is headed by the President and the cabinet; the legislative, whose powers are vested by the Constitution in the National Congress; and the judiciary, whose powers are vested in the Supreme Federal Court and lower federal courts. The seat of the federal government is located in Brasília.

Same-sex marriage in Santa Catarina has been legal since April 29, 2013. Santa Catarina was one of the twelve Brazilian states to have opened marriage to same-sex couples before its nationwide legalisation in May 2013. Civil unions have also been available since 2011, following a ruling by the Supreme Federal Court. 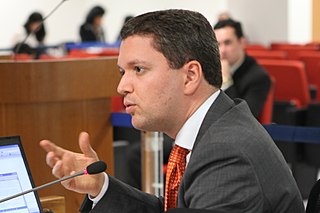 Fabiano Augusto Martins Silveira is a Brazilian lawyer and politician. He is a legislative advisor to the Federal Senate of Brazil and was briefly the Minister of Transparency, Supervision and Control of Brazil. 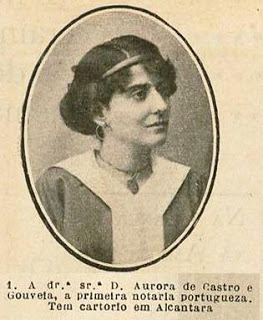 Aurora Teixeira de Castro was vice-president in 1926 and 1927 of the feminist Conselho Nacional das Mulheres Portuguesas. She was a lawyer and notary and the first female notary in Portugal.