The National Library of Armenia (Armenian : Հայաստանի Ազգային Գրադարան (Hayastani Azgayin Gradaran)) is a national public library in Yerevan, Armenia. It was founded in 1832 as part of the state gymnasium-school of Yerevan. It is the official cultural deposit for the entire republic.

The current building of the library dating back to 1939, is on Teryan street of Kentron district. It was designed by architect Alexander Tamanyan to house around seven million books. Between 1925 and 1990, the library was named after Aleksandr Myasnikyan.

Currently, the library is home to a collection of 6.6 million books. [1]

Urbatagirk or "The Book of Friday" was the first printed book in the Armenian language. It was printed in Venice (Italy) in 1512 by Hakob Meghapart. Its content was partly religious, partly secular, consisting of cures and prayers for the sick, ancient writings, myths, long quotations from Grigor Narekatsi's Book of Lamentations, the Prayer of Cyprianos of Antioch, the story of the Virgin and Justinian, etc.

Amsterdam is the capital and most populous city of the Netherlands, with a population of 866,737 within the city proper, 1,380,872 in the urban area, and 2,410,960 in the metropolitan area. Amsterdam is in the province of North Holland. Amsterdam is colloquially referred to as the "Venice of the North" due to its large number of canals which are a UNESCO World Heritage Site. 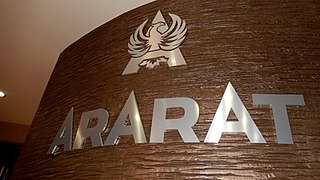 Yerevan Brandy Company, commonly known with its famous brand "ArArAt", is the leading enterprise of Armenia for the production of cognac. It was founded in 1887, during the period of the Russian Empire. After the Sovietization of Armenia, the factory became a state-owned enterprise. In 1999, the government of independent Armenia sold the factory to the French Pernod Ricard company for distilled beverages. The variety of the company's cognac products are labeled and publicized as ArArAt.

Abovyan or Abovian, is a town and urban municipal community in Armenia within the Kotayk Province. It is located 16 kilometres northeast of Yerevan and 32 kilometres southeast of the province centre Hrazdan. As of the 2011 census, the population of the town is 43,495, down from 59,000 reported at the 1989 census. Currently, the town has an approximate population of 35,400 as per the 2016 official estimate. 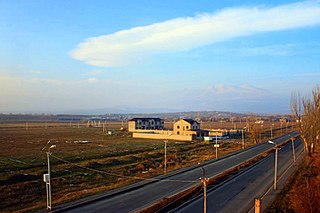 Yeghvard, is a town and urban municipal community in the Kotayk Province of Armenia. It is located 39 kilometres southwest of the provincial centre Hrazdan. As of the 2011 census, the population of the town is 11,672, almost same as reported during the 2001 census. Currently, the town has an approximate population of 10,900 as per the 2016 official estimate.

Tsovasar is a village in the Gegharkunik Province of Armenia. The town contains a church, dedicated to S. Grigor Lusavorich, dating to the 9th century, and a 16th-century S. Astavatsatsin church.

Erebuni, is one of the 12 districts of Yerevan, the capital of Armenia. It is situated southeast of the city centre where Erebuni Fortress is located. The name of Yerevan itself is derived from ancient Erebuni.

Mrgashen is a village in the Kotayk Province of Armenia. It is located along the left bank of the Arzni-Shamiram aqueduct. Mrgashen was officially founded in March 1960 around the state-owned collective farm or sovkhoz No. 6. The local economy is highly dependent on agriculture, based primarily on orchard cultivation and pig or cattle-breeding. The community currently has a school, kindergarten, house of culture, medical station, and a library. 60% of households receive natural gas and drinking water for the village comes from the Arzakan-Yerevan network, while water for irrigation comes from the Arzni-Shamiram aqueduct.

The National Archives of Armenia are the national archives of Armenia. The agency was officially founded in 1923. The headquarters are located in Yerevan, with regional branches in other cities.

Armenia is underdeveloped in its waste management and recycling activities.

The Aram Khachaturian House-Museum opened in Yerevan, Armenia in 1982 and is devoted to the exhibition of the Armenian composer Aram Khatchaturian's personal artifacts, as well as to the research and study of his creative output.

After the introduction of movable printing type to Europe by Johannes Gutenberg in Germany, Armenians from throughout the diaspora began to publish Armenian-language books. The first book which had Armenian letters was published in Mainz (Germany) in 1486. The first Armenian book to be published by the printing press was Urbatagirq—Book of Friday prayers—which was published by Hakob Meghapart in Venice in 1512.

The Yerevan History Museum is the history museum of Yerevan, the capital city of Armenia. The museum was founded in 1931 as the Communal Museum. Currently, the museum is located in a building attached to the Yerevan City Hall. The architect of the building was Jim Torosyan.

The Civilitas Foundation is an Armenian non-profit organization based in Yerevan, Armenia, and established in October 2008 by Armenia's former Minister of Foreign Affairs, Vartan Oskanian. It is a development agency and think tank directed by Apo Boghigian that works to strengthen civil society, promote democracy, economic development and education in Armenia, and facilitate dialogue between Armenia and the international community on a number of pertinent political issues. In doing so, Civilitas has strengthened the ties between Armenia and the Armenian Diaspora.

Armenian National Agrarian University (ANAU), is a state university and higher educational institution based in Yerevan, the capital of Armenia.The university trains and prepares specialists for the agricultural sphere.

Tigran Petrosian Chess House, officially the Central House of Chess-player named after Tigran Petrosian, is the centre of the sport of chess in Yerevan, Armenia. It was opened in 1970. In 1984, it was renamed after the former world chess champion Tigran Petrosian. The architect of the triangular-shaped building was Zhanna Meshcheryakova. Tigran Petrosian laid the first stone in the foundation of the building. Currently, the director of the centre is Hrachik Tavadyan.

Officially National Children's Library named after Khnko Aper is a national children's library in Yerevan, Armenia. It was founded in 1933 and renamed after the famous children's writer Khnko Aper after his death in 1935. Since 1980, the library is located on Teryan street of Kentron district, next to the Swan Lake of the Opera House. The architects of the library building are Levon Ghulumyan and Rouzan Alaverdyan. The library is home to a collection of 500 thousand books. It has a large reading room with a capacity of 100 seats.

Nairi Cinema, is the second-largest cinema hall in the Armenian capital of Yerevan, located on the intersection of Mashtots Avenue with the Isahakyan street at the central Kentron District.

Yerevan Figure Skating and Hockey Sports School, is a figure skating centre and school in the Armenian capital Yerevan. The centre was opened in December 2015 and has a capacity of 538 seats. It is located on Admiral Isakov 27/10 Avenue, adjacent to the Yerevan Velodrome. The centre is named after the 10-time figure skating world champion and Russian politician Irina Rodnina. In 2019 the Yerevan City Council has renamed the Irina Rodnina Figure Skating School to Yerevan Figure Skating and Hockey Sports School.