The National Library of Bangladesh (NLB) (Bengali : বাংলাদেশ জাতীয় গ্রন্থাগার) is the legal depository of all new books and other printed materials published in Bangladesh under the copyright law of Bangladesh. It was founded in 1973, but it traces its origins back to 1967, before the Bangladesh Liberation War and its independence. [4] It is open to general public and has both Bengali and English language books. [5] It is housed in the National Library Bhaban. [6]

Bangladesh, officially the People's Republic of Bangladesh, is a country in South Asia. While it is the 92nd-largest country, spanning 147,570 square kilometres (56,980 sq mi), it is the world's 8th-most populous country with a population nearing 163 million, making it one of the most densely populated countries in the world. Bangladesh shares land borders with India to the west, north and the east and Myanmar to the east, whereas the Bay of Bengal lies to its south. Dhaka, its capital and largest city, is also the economic, political and the cultural hub of the country. Chittagong, the largest sea port, is the second largest city. The country's geography is dominated by the Ganges delta which empties into the Bay of Bengal the combined waters of several river systems, including those of the Brahmaputra and the Ganges. As a result, the country is criss-crossed by numerous rivers and inland water ways. Highlands with evergreen forests cover the landscape in the northeastern and southeastern regions of the country. The country also features the longest natural sea beach and most of the largest mangrove forest in the world. The country's biodiversity includes a vast array of plants and wildlife, including the endangered Bengal tiger, the national animal.

The Bangladesh Liberation War, also known as the Bangladesh War of Independence, or simply the Liberation War in Bangladesh, was a revolution and armed conflict sparked by the rise of the Bengali nationalist and self-determination movement in what was then East Pakistan during the 1971 Bangladesh genocide. It resulted in the independence of the People's Republic of Bangladesh. The war began after the Pakistani military junta based in West Pakistan launched Operation Searchlight against the people of East Pakistan on the night of 25 March 1971. It pursued the systematic elimination of nationalist Bengali civilians, students, intelligentsia, religious minorities and armed personnel. The junta annulled the results of the 1970 elections and arrested Prime minister-designate Sheikh Mujibur Rahman. The war ended on 16 December 1971 after West Pakistan surrendered.

After the partition of the subcontinent in 1947, the government of Pakistan established the National Library of Pakistan in Karachi in 1962 and a provincial book deposit branch of the Pakistan National Library in Dhaka in 1967. After the liberation war of Bangladesh, it was keenly felt by all quarters that a national library is indispensable for the newborn nation. Considering the necessity and importance, the government resolved to set up the National Library of Bangladesh in Dhaka. The Library first started functioning with the manpower, resources and materials inherited from the Provincial Book Deposit Branch. In fact, that book deposit branch was the embryo of the National Library of Bangladesh which came into being after the independence of the country in 1973. It was placed under the administration of Directorate of Archives and Libraries along with the National Archives. The Directorate is under the Ministry of Cultural Affairs [4] The government of Bangladesh provided the library with air conditioning in 1978, under the government's five-year plan. In 2008 the library was without electricity for about a month because of the Dhaka Electric Supply Company and the Public Works Department refused to fix it. [6] It has faced criticism for not having an online catalogue. [7]

Pakistan, officially the Islamic Republic of Pakistan, is a country in South Asia. It is the world’s sixth-most populous country with a population exceeding 212,742,631 people. In area, it is the 33rd-largest country, spanning 881,913 square kilometres. Pakistan has a 1,046-kilometre (650-mile) coastline along the Arabian Sea and Gulf of Oman in the south and is bordered by India to the east, Afghanistan to the west, Iran to the southwest, and China in the northeast. It is separated narrowly from Tajikistan by Afghanistan's Wakhan Corridor in the northwest, and also shares a maritime border with Oman.

Karachi (Urdu: کراچی‎; ALA-LC: Karācī, IPA: [kəˈraːtʃi]; is the capital of the Pakistani province of Sindh. It is the most populous city in Pakistan, and fifth-most-populous city proper in the world. Ranked as a beta-global city, the city is Pakistan's premier industrial and financial centre. It is the cultural, economic, philanthropic, educational, and political hub of the country, and Pakistan's most cosmopolitan city. Situated on the Arabian Sea, Karachi serves as a transport hub, and is home to Pakistan's two largest seaports, the Port of Karachi and Port Bin Qasim, as well as Pakistan's busiest airport, Jinnah International Airport. 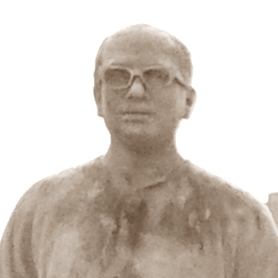 Syed Nazrul Islam was a Bangladeshi politician and a senior leader of the Awami League. During the Bangladesh Liberation War, he was declared as the Vice President of Bangladesh by the Provisional Government. He served as the Acting President in the absence of Sheikh Mujibur Rahman.

The Bengali Language Movement was a political movement in former East Bengal advocating the recognition of the Bengali language as an official language of the then-Dominion of Pakistan in order to allow its use in government affairs, the continuation of its use as a medium of education, its use in media, currency and stamps, and to maintain its writing in the Bengali script.

Shahbag or Shahbagh is a major neighbourhood and a police precinct or thana in Dhaka, the capital and largest city of Bangladesh. It is also a major public transport hub. It is a junction between two contrasting sections of the city—Old Dhaka and New Dhaka—which lie, respectively, to its south and north. Developed in the 17th century during Mughal rule in Bengal, when Old Dhaka was the provincial capital and a centre of the flourishing muslin industry, it came to neglect and decay in early 19th century. In the mid-19th century, the Shahbag area was developed as New Dhaka became a provincial centre of the British Raj, ending a century of decline brought on by the passing of Mughal rule.

Shafiur Rahman is considered in Bangladesh to be a martyr of the language movement which took place in the former East Pakistan. 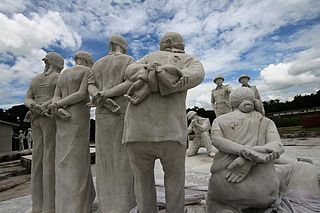 In 1971 the Pakistan Army and their local collaborators, most notably the extreme right wing Islamist militia group Al-Badr, engaged in the systematic execution of Bengali pro-liberation intellectuals during the Bangladesh Liberation War of 1971, a war crime. Intellectuals were killed throughout the entire duration of the war. The largest number of executions took place on 25 March and 14 December 1971, as it became apparent that Bangladesh would become independent. 14 December is commemorated in Bangladesh as Martyred Intellectuals Day.

Yusuf Ali Chowdhury (1905 – 1971, commonly referred to as Mohan Mia, was a Bengali-Pakistani politician.

Abdul Monem Khan was a Pakistani politician who was the longest serving governor of East Pakistan during 1962–1969.

Bangladeshis are the citizens of Bangladesh. The country is named after the historical region of Bengal, of which it constitutes the largest and easternmost part. Bangladeshi citizenship was formed in 1971, when the permanent residents of the former East Pakistan were transformed into citizens of a new republic. Bangladesh is the world's eighth most populous nation. Vast majority of Bangladeshis are ethnolingustically Indo-Aryan people who speak Bengali language and follow the Islamic religion. The population of Bangladesh is concentrated in the fertile Bengal delta, which has been the center of urban and agrarian civilizations for millennia. The country's highlands, including the Chittagong Hill Tracts and the Sylhet Division, are home to various tribal minorities.

The Mukti Bahini, also known as the Bangladesh Forces, was the guerrilla resistance movement consisting of the Bangladeshi military, paramilitary and civilians during the War of Liberation that transformed East Pakistan into Bangladesh in 1971. An earlier name Mukti Fauj was also used. Mukti Bahini and Kader Bahini were created, armed and provided logistics support by India's intelligence agency Research and Analysis Wing (RAW) during the Bangladesh Liberation War of 1971.

National Museum of Science and Technology (NMST) in Dhaka, Bangladesh was founded on April 26, 1965 by the Pakistani government and became a part of Bangladesh's Ministry of Science and Technology following the Bangladesh Liberation War. It was first based in the Dhaka Public Library, and moved a number of times before its permanent home was completed in 1981. The NMST serves as Bangladesh's only science museum and organizes science education activities at a national level.

The Ministry of Religious Affairs is the ministry responsible for religious events, buildings and Hajj in Bangladesh.9

Suleman Khan was a Bangladesh physician who was killed in the Bangladesh Liberation war and is considered a martyr in Bangladesh.

Graphic Arts Institute is a historic public arts institute in Dhaka, Bangladesh. It is the only public institute of printing and design in Bangladesh.

Atomic Energy Centre is the oldest nuclear research centre in Bangladesh and is located in Dhaka, Bangladesh. It falls within the campus of University of Dhaka and is under the management of Bangladesh Atomic Energy Commission.

Department of Public Libraries is a government department under the Ministry of Cultural Affairs. It is responsible for government owned public libraries in Bangladesh and is located in Dhaka, Bangladesh.

Bangladesh Philosophical Association is an association of philosophers in Bangladesh. It carries out philosophical research and promotes the study of humanities. It is located in Dhaka.

National Book Centre is a Bangladesh government centre under the Ministry of Cultural Affairs that is responsible for encouraging reading, organize book fairs, and support publishing of books in Bangladesh.