The National Library of Greece (Greek : Εθνική Βιβλιοθήκη) is situated near the center of city of Athens. It was designed by the Danish architect Theophil Freiherr von Hansen, as part of his famous Trilogy of neo-classical buildings including the Academy of Athens and the original building of the Athens University. It was founded by Ioannis Kapodistrias.

The original idea for establishing a National Library was from the philhellene Johann Jakob Mayer, in an August 1824 article of his newspaper Ellinika Chronika , published at Missolonghi, where Mayer and Lord Byron had been promoting Greece's independence. Mayer's idea was implemented in 1829 by the new Greek government of Ioannis Kapodistrias, [2] who grouped together the National Library with other intellectual institutions such as schools, national museums, and printing houses. These were all placed in a building (then being used as an orphanage) on the island Aegina and supervised by Andreas Moustoxydis, who thus became president of the committee of the Orphanage, director of the National Archaeological Museum of Athens, and director of the National School.

At the end of 1830, the library, which Moustoxydis named the National Library, had 1,018 volumes of printed books, which had been collected from Greeks and philhellenes. In 1834, the Library was relocated to Athens, the new capital, and was at first housed temporarily in the public bath in the Roman Agora of Athens and then later in the Panagia Gorgoepikoos church.

The collection increased rapidly. In addition to the purchase of books from private libraries, supervised by Dimitris Postolakas (1,995 volumes), the Library accepted many large donations of books, like one from Christoforos and Konstantinos Sakellarios (5,400 volumes) and one from Markos Renieris (3,401 volumes).

In 1842, the Public Library merged with Athens University's library (15,000 volumes), and was housed together with the currency collection at the new building of Otto's University. The first director (then-called "president") was Georgios Kozakis-Typaldos [3] of the newly enlarged institution, retaining the job until 1863. At this time, the Library was enriched with significant donations and with rare foreign language books from all over Europe. With the royal charter of 1866, the two libraries merged, and were administered as the "National Library of Greece". From 1877–1910, its director was Michael Deffner.

On 16 March 1888 the foundation stone for a new neoclassical marble building was laid. The building was financed by three Kefallonian-born brothers of the Diaspora, Panagis, Marinos and Andreas Vallianos. It was designed by Baron Theophil von Hansen and its construction supervised by Ernst Ziller. The Library remained in the older University building until 1903, when it was relocated to the new Vallianos building, which still partly houses the Library in addition to two other buildings, at Agia Paraskevi and Nea Halkidona.

The library has 4,500 Greek manuscripts which is one of the greatest collection of Greek scripts. There are also many chrysobulls and archives of the Greek Revolution.

Among the library's holdings are a codex of the four Gospels attributed to the scribe Matthew; uncial codex with a fragment Gospel of Matthew from 6th century (Uncial 094), Flora Graeca Sibthorpiana by English botanist John Sibthorp; Rigas' Chart by Rigas Velestinlis; The Large Etymological Dictionary , a historic Byzantine dictionary; and the first publication of Homer's epics and hymns. [4]

The present building has long been inconvenient due to limited space and technology demands. Although the Vallianos building will continue to house some of its current functions, the bulk of the library in 2018 was relocated to a new 22,000-square meter building at the Stavros Niarchos Foundation Cultural Center on the Phaleron Bay "Delta". The 20-hectare Delta is a seafront area that used to host the Athens horse race track, which was replaced by the Markopoulo Olympic Equestrian Centre for the Athens 2004 Olympics. Italian architect Renzo Piano proposed a radical new plan for the National Library and the National Opera of Greece, and the project was funded by the Stavros Niarchos Foundation and donated to the Greek state. The twin buildings are integrated within a landscaped park with indigenous Mediterranean flora, and feature extensive renewable energy facilities and a central plaza around a 30-m wide seawater channel. Work on the project started in 2012 with completion due for 2016. [5]

Petros Mavromichalis, also known as Petrobey, was the leader of the Maniot people during the first half of the 19th century. His family had a long history of revolts against the Ottoman Empire, which ruled most of what is now Greece. His grandfather Georgios and his father Pierros were among the leaders of the Orlov Revolt.

After the Fall of Constantinople to the Ottomans and the following trends of Greek migration to the Diaspora, Greek architecture was concentrated mainly on the Greek Orthodox churches of the Diaspora. These churches, such as other intellectual centres built by Greeks, were used also as a meeting-place. The architectural style of these buildings was heavily influenced by the western European architecture.

Uncial 094, ε 016 (Soden); is a Greek uncial manuscript of the New Testament, dated paleographically to the 6th-century.

Uncial 0161, ε 019, is a Greek uncial manuscript of the New Testament, dated paleographically to the 8th century.

Georgios Gennadios was a Greek man of letters who was instrumental in the founding of some of the first educational establishments of modern Greece, considered among the most important personalities of the Modern Greek Enlightenment.

Georgios Stavros was a Greek banker, benefactor and revolutionary. He was one of the founders and the first governor of the National Bank of Greece. 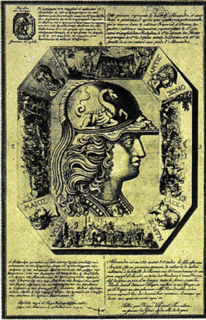 Panagis Kalkos was one of the first Greek architects of the modern Greek state. Educated in Munich, he is a representative of a strict neoclassic style in architecture. He built some of the most characteristic neoclassic buildings, both public and private, of Athens, many of which still survive today.

Konstantinos Rados was a Greek merchant and member of the Filiki Eteria, a secret organization whose purpose was to overthrow the Ottoman rule of Greece. He took part in the Greek War of Independence against the Ottomans and during the governance of Ioannis Kapodistrias he held important administrative positions.

Georgios Psyllas was a Greek scholar and politician, and editor during the Greek War of Independence of the newspaper Efimeris ton Athinon.

The General Map of Moldavia is one of the two maps of the Danubian Principalities which was printed by Rigas Feraios in 1797. He printed it in Jacob Nits’ printing press and the engraving was made by Franz Müller. The map is of 82 x 63 cm. in black and white and it is printed on paper from Holland. Its full title is "GENERAL MAP / OF / MOLDAVIA,/ AND PART OF ITS NEIGHBOR PROVINCES/. Published by Rigas Velestinlis from Thessaly for the sake of Greeks and philhellenes, 1797. Engraved by Francois Müller in Vienna".

The New Map of Wallachia is one of the maps of the Danubian Principalities which were printed by Rigas Feraios in 1797 in Vienna, engraved by Franz Müller who was also Rigas' partner in other cartographic works. The Map is in black and white, it is 0,85 x 0,63 m. and has the title New Map of Wallachia and part of Transylvania by Rigas Velestinlis from Thessaly, published for the sake of the Greeks and philhellenes – 1797-engraved by Franz Müller in Vienna.

Ioannis Sotiris Alexakis (1885–1980) was a Cretan lieutenant general. He fought in both Balkan Wars, in World War I, the Asia Minor Campaign and World War II. He fought in numerous battles and was decorated with 20 medals for bravery.

Roxandra or Roxana or Roksandra Skarlatovna Edling-Sturdza was a philanthropist and a writer. Her chief achievement was the foundation of schools and orphanages for the young and needy refugees in Odessa during the years of wars and revolutions in the Balkans. She was a grandchild of the Grand Dragoman or Prince of Moldavia Constantine Mourousis; that and her own actions, vision, will and determination made her a prolific advocate of young refugee needs all over Europe.