The National Library of Montenegro "Đurđe Crnojević" (NLM) is a public institution that preserves the written, printed and publications in other media published in Montenegro and abroad. As part of its own publishing production, NLM publishes retrospective and current Montenegrin national bibliography  [ de ]. NLM is the parent library to all libraries in Montenegro and the National Agency for the assignment of ISBN, ISSN, ISMN and other international bibliographic numbers, and for Cataloguing in Publication (CIP) for publishers in Montenegro. NLM "Đurđe Crnojević" was named after the 15th century ruler of Montenegro, who in 1493 established the first state printing house in the world and the second Cyrillic printing house in Europe. Since 2004, Jelena Djurovic has been the Director of the National Library.

Montenegro is a country in Southeast Europe on the Adriatic Sea. It borders Bosnia and Herzegovina to the northwest; Serbia and Kosovo to the east, Albania to the south and Croatia to the west. Montenegro has an area of 13,812 square kilometres and a population of 620,079. Its capital Podgorica is one of the twenty-three municipalities in the country. Cetinje is designated as the Old Royal Capital.

Đurađ Crnojević was the Lord of Zeta between 1490 and 1496. The son of Ivan Crnojević and Goisava Arianiti, he was the founder of the first South Slavic printing house. Crnojević styled himself "Duke of Zeta". He was well known by his great education, knowledge of astronomy, geometry and other sciences.

NLM "Đurđe Crnojević" is located at two sites in Cetinje, in two significant historical mansions built in 1910 for the Italian and French diplomacies in the Kingdom of Montenegro (1910-1918). The former Italian Embassy was built according to the project designed by the Italian architect Corradini, while the former French embassy was designed by renowned French architect Paul Gaudet.

The museum holdings consist of the national collection "Montenegrina" or "Černogorika" (Montenegrin books and periodicals), and Legacies.

Collection of manuscripts and documentary materials: The oldest manuscripts, mainly written by former rulers and prominent persons in Montenegro, date from the eighteenth and nineteenth centuries. This collection also holds some personal documents, reports, verdicts. Some of the most valuable manuscripts are: Pismo Ugnjanima written by Bishop Sava in 1774; Pismo Vladike Petra I Petrovića Njegoša Bjelici iz Majina from 1794; Crnogorcima na brodu Porto Roze 1817; and poems of Petar II Petrović Njegoš.

The Old and Rare Books Collection contains about 10,000 library items, including incunabula, postincunabula, old books (Cyrillic books printed before 1868, and Latin to 1800), rare editions and miniatures. Among the most valuable Cyrillic manuscript is Otočnik from the end of the fourteenth century. Among printed books, the oldest ones in the collection are Noctes Atticae, printed in typography of Andrija Paltašić-Kotoranin (Venice, 1477), and Epistolae sancti Hieronymi (Venice, 1496.; printer John Varcelens). Among periodicals from the late eighteenth and nineteenth centuries Orfelin's Slaveno serbskij magazine, the first Serbian journal from 1768, stands out for its rarity.

The Cartographic Collection consists of more than 500 geographical atlases and 2,500 geographic maps. The oldest and most valuable atlas in the Montenegrin National Library collection originates from 1764. It is the first Mediterranean atlas, Carte de la mer Mediterranée, by celebrated French hydrographer Joseph Raux. The collection also includes 42 800 postcards, of which the oldest ones (from the end of the nineteenth century) can be a very important material for studying the life of the former residents of Cetinje and Montenegro, who recorded their impressions of the great European and world cities, as well as the events from their private lives on these postcards.

The Music and Audiovisual Holdings contain about 27,000 library items, that is about 19,000 audio-visual materials and 8,000 printed music, among which Album Černogorski, 70 narodniuh pisni of Ludvik Kuba from 1890, and Motifs from Montenegro, the concert for Violin and piano by Antun Pogacar have a special value. Among other items, this collection has about 7,500 single records, 7,000 LP records, 4100 audio cassettes, more than 200 video cassettes and 1,000 CDs.

The Artistic and Graphic Collection contains about 74 000 posters of all kinds, of which 17 000 Montenegrin - political, film, concert, exhibition, theatrical, educational, tourism, commercial. Special for their rarity and artistic value are the posters made for the plays performed at the Royal Theatre "Zetski dom" in Cetinje, from the end of the nineteenth and the beginning of the twentieth century.

NLM "Đurđe Crnojević", as a member of the Conference of European National Librarians (CENL), installed its own electronic catalog, as the common catalog of Montenegrin libraries, and a part of its digitized collections on the web portal of European national libraries - TEL (The European Library).

Digital collections are available at http://dlib.me/. 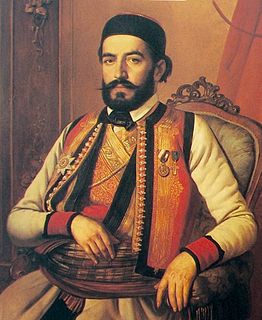 Petar II Petrović-Njegoš, commonly referred to simply as Njegoš (Његош), was a Prince-Bishop (vladika) of Montenegro, poet and philosopher whose works are widely considered some of the most important in Serbian and Montenegrin literature. 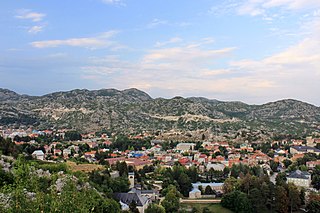 Cetinje, is a city and Old Royal Capital of Montenegro. It is also the historic and the secondary capital of Montenegro, where the official residence of the President of Montenegro is located. According to the 2011 census, the town had a population of 14,093 while the Cetinje municipality had 16,657 residents as of 2011.

Montenegrins, are a nation and South Slavic ethnic group native to Montenegro. 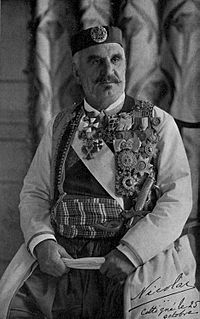 Crown Prince Nicholas of Montenegro is the Head of the House of Petrović-Njegoš, which reigned over Montenegro from 1696 to 1766 and again from 1782 to 1918. 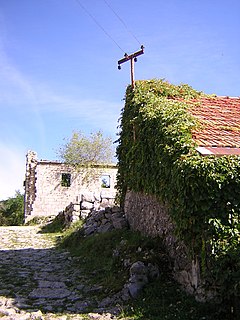 Njeguši is a village in the Cetinje Municipality of southern Montenegro, located on the slopes of Mount Lovćen, within the Lovćen national park. The village is best known as the birthplace of the Petrović dynasty, which ruled Montenegro from 1696 to 1918, as well as the Montenegrin office of the ''serdar'' and ''guvernadur'', held by the Radonjić family. The village is also significant for its well-preserved traditional folk architecture. Njeguški sir and Njeguški pršut, made solely in area around Njeguši, are genuine contributions to Montenegrin cuisine. The village is situated in the Njeguši field and historically used to be a center of the tribe of the same name that formed a part of Katunska Nahija, one of the provinces of Old Montenegro. The village consists of the settlements: Dugi Do, Žanjev Do, Erakovići, Kopito, Vrba, Raićevići, Velji and Mali Zalazi, Majstori and Mirac. The name Njeguši is according to Ilija Ruvarac derived from Negusius Podcupica, mentioned in an 11th-century document. The original house the Petrović Family used to live in is located at 42.432271, 18.808675.

Danilo I Petrović-Njegoš was the Metropolitan of Cetinje between 1697 and 1735, and a founder of the House of Petrović-Njegoš, which ruled Montenegro from 1697 to 1918. 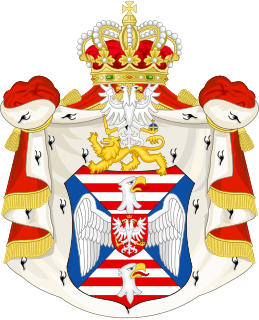 Petrović-Njegoš were the family that ruled Montenegro from 1696 to 1916. Montenegro had enjoyed de facto independence from the Ottoman Empire since 1711, but it only received formal international recognition as an independent principality in 1878. 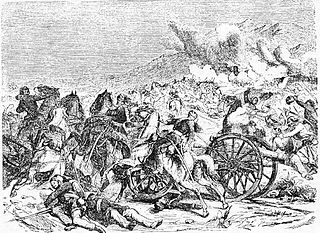 The Battle of Grahovac took place in the eponymous village from 29 April to 1 May 1858, when Montenegrin Grand Duke Mirko Petrović-Njegoš led an army against the Ottomans, ending in a decisive victory. After the victory, the demarcation of the border between Montenegro and the Ottoman Bosnia Eyalet was finalised. A considerable arsenal of war trophies was captured following the retreat of the Ottoman army.

The National Museum of Montenegro, is located in Cetinje, a historic capital of Montenegro. It was established in 1896. 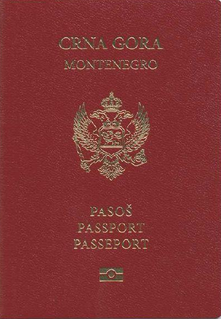 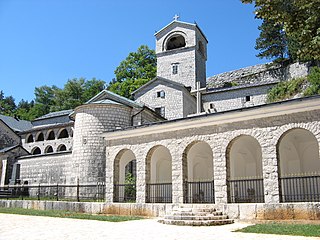 The Cetinje Monastery is a Christian monastery of the Serbian Orthodox Church in Montenegro. It is located in Cetinje and is the seat of the Metropolitanate of Montenegro. A center of historical and cultural importance, it was founded c. 1484 by Prince Ivan Crnojević of Zeta, and designated as the cathedral monastery of the Eparchy of Zeta. It was devastated in 1692, during the Morean War, and rebuilt between 1701 and 1704 by Metropolitan Danilo Petrović-Njegoš on the site of the former court of Ivan Crnojević.

Staniša "Stanko" Crnojević was a member of the Crnojević noble family that held the Lordship of Zeta; Stanko was the heir to Ivan I Crnojević, who ruled from 1465 to 1490. In 1485 his Grandfather Ndrek son of Gjon Kastrioti sent him to the Ottoman sultan to guarantee his loyalty, as an Ottoman vassal. Stanko converted into Islam and received the name Skender, hence he is also known as Skenderbeg Crnojević, and became the Ottoman sanjakbey of the Sanjak of Montenegro in 1514–1528. He is enumerated in Serbian and Montenegrin epic poetry, in which he is sometimes known as Maksim.

The Prince-Bishopric of Montenegro, located around modern day Montenegro, was an ecclesiastical principality that existed from 1516 until 1852. It emerged from the bishops of Cetinje, later metropolitans, who defied Ottoman overlordship and transformed the parish of Cetinje to a de facto theocracy, ruling as Metropolitans. The history starts with Vavila, and the system was transformed into a hereditary one by Danilo Šćepčević, a bishop of Cetinje who united the several tribes of Montenegro into fighting the Ottoman Empire that had occupied most of southeastern Europe. Danilo was the first of the House of Petrović-Njegoš to occupy the office as Metropolitan of Cetinje until 1851, when Montenegro became a secular state (principality) under Danilo I Petrović-Njegoš. It also became a brief monarchy when it was temporary abolished 1767–1773, during which impostor Little Stephen posed as Russian Emperor and crowned himself Lord of Montenegro.

The Cetinje Chronicle is a collection of manuscripts compiled by Vasilije Petrović who added some of his own writings to it. It contains 81 leaves of dimensions 32 cm x 21,5 cm. It is kept in Cetinje monastery. There are other versions of this collection which are not identical to the original because the original texts were transcribed by different people at different times. The first scholar who used this chronicle as source for his works was Vasilije Petrović who used it for his work on history of Montenegro, published in Moscow in 1754.

Slobodan Marunović, is an actor from Montenegro.

Dušan D. Vuksan was a Serbian pedagogue, historian, editor and prominent representative of Montenegrin historiography in Yugoslavia during the interwar period.

The Mausoleum of Njegoš is a mausoleum interring Petar II Petrović-Njegoš located on the top of Mount Lovćen.