North Nicosia or Northern Nicosia is the capital and largest city of the de facto state of Northern Cyprus. It is the northern part of the divided city of Nicosia and is governed by the Nicosia Turkish Municipality. As of 2011, North Nicosia had a population of 61,378 and a metropolitan area with a population of 82,539. 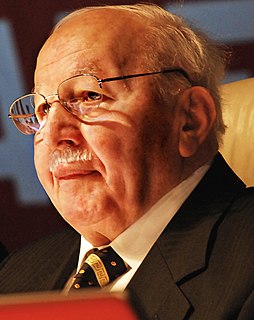 Necmettin Erbakan was a Turkish politician, engineer, and academic who was the Prime Minister of Turkey from 1996 to 1997. He was pressured by the military to step down as prime minister and was later banned from politics by the Constitutional Court of Turkey for violating the separation of religion and state as mandated by the constitution.

The Turkish invasion of Cyprus, code-named by Turkey as Operation Attila, was a Turkish military invasion of the island country of Cyprus. It was launched on 20 July 1974, following the Cypriot coup d'état on 15 July 1974.

Fazıl Küçük was a Turkish Cypriot politician who served as the first Vice President of the Republic of Cyprus.

Bahçelievler is a neighborhood in Çankaya District of Ankara, Turkey. The name means 'houses with gardens' in Turkish.

The Security Forces Command is the military and security force of the Turkish Republic of Northern Cyprus, whose independence is recognized only by Turkey and which the United Nations considers to be a Turkish-occupied territory. It is a 9,000 strong force primarily made up of conscripted Turkish Cypriot males between the ages of 18 and 40. It is a combined arms force, with land, air and naval elements.

Millî Kütüphane is the National Library of Turkey, located in Ankara. It was founded on April 15, 1946. Milli Kütüphane has one of the richest collections in Turkey. The collection consists of 3,089,517 items, which can be categorized as follows:

Below are the Turkey national football team all time results:

The ÇOMÜ Library, the main research library of the Çanakkale Onsekiz Mart University, is one of the oldest libraries in the southern Marmara Region of Turkey and the largest in southern and western Marmara region. The library is at the centre of the main campus. The ÇOMÜ Library is a 24-hour library, open 365 days a year including holidays. 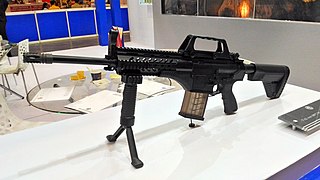 The MPT-76 is a modular rifle designed by MKEK Kalekalıp and produced by MKEK to meet the demands of the Turkish Armed Forces and to replace its aging Heckler & Koch G3 battle rifles due to most of them being near the end of their service life. The MPT-76 was designed for robust high altitude, all weather combat, capable of functioning in extreme hot and cold weather. The MKEK MPT is a rifle intended to take abuse and extreme mistreatment and still maintain high accuracy and reliability in order to survive in true battle environments. The Turkish government has invested US$22 million into the project.

Müzeyyen Dilek Özbiler is a Turkish Cypriot women's football forward currently playing in the First League for İlkadım Belediyesi Yabancılar Pazarı Spor with jersey number 11. She is a member of the Turkey women's national team since 2014.

Mihran Apikyan was an Armenian and Turkish writer and educator of Armenian descent. He is also known as Mihran Efendi and with his literary nom de plume Mihrî. He is accredited for introduction European styled educational methods in the Ottoman Turkish educational system.

Elhamra Cinema was built in 1926 in Izmir, Turkey. It was designed by Architect Tahsin Sermet Bey. It was built for public use as a theatre, currently it is being using as Izmir State Opera and Ballet.

Zehra Borazancı is a Turkish-Cypriot women's football midfielder currently playing in the Turkish Women's First League for ALG Spor with jersey number 2. She is also a successful international football tennis player for her country.