The National Library of Yemen is the national library of Yemen, located in central Sana'a. It is located near the Al-Tahrir Square and the Yemen Military Museum. [1] It has an extensive collection of books in French and in English about Yemen.

Yemen, officially the Republic of Yemen, is a country at the southern end of the Arabian Peninsula in Western Asia. It is the second-largest Arab sovereign state in the peninsula, occupying 527,970 square kilometres. The coastline stretches for about 2,000 kilometres. It is bordered by Saudi Arabia to the north, the Red Sea to the west, the Gulf of Aden and Guardafui Channel to the south, and the Arabian Sea and Oman to the east. Yemen's territory encompasses more than 200 islands, including Socotra, one of the largest islands in the Middle East. Yemen is a member of the Arab League, United Nations, Non-Aligned Movement and the Organisation of Islamic Cooperation.

Al-Tahrir Square, also Al-Tahreer Square or Tahreer Square is a square in central Sana'a, Yemen. It is located west of the Abbas Mosque and the Sultan Palace Hotel, south of the National Museum of Yemen and north of the Yemen Military Museum. Protests took place here during the 2011 Yemeni uprising, involving clashes between supporters of President Saleh and his detractors. Tawakel Karman, awarded the 2011 Nobel Peace Prize, made her headquarters a tent pitched at the Square, where she has led weekly Tuesday protests since 2007. 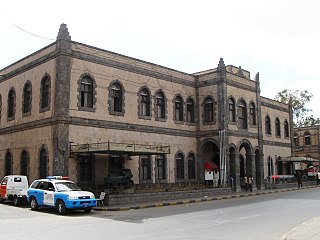 The Yemen Military Museum or The Military Museum is a museum in central Sana'a, Yemen. It is located on the southwestern corner of the Al-Tahrir Square, next to the National Library of Yemen.It has a wide range of artifacts from ancient artifacts to items during the British occupation and subsequent revolution. 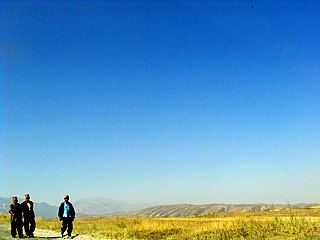 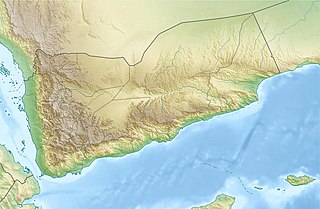 The Sarawat Mountains, also known as the Sarat, is a mountain range in the western part of the Arabian Peninsula. In a broad sense, it runs parallel to the eastern coast of the Red Sea, and thus encompasses the Asir and Hijaz Mountains, which can be seen as including the Midian Mountains. In a narrow sense, the Sarawat start in Asir in southern Saudi Arabia, and extend to the Gulf of Aden in the south, running along the entire western coast of Yemen, in what used to be North Yemen, and extend eastwards into part of what used to be South Yemen, thus running parallel to the Gulf of Aden.

Samhah or Samha is an inhabited island in the Guardafui Channel. A part of the Socotra archipelago, it is located between the island of Socotra and Somalia. Like the whole group, it belongs to Yemen, and is part of Socotra Governorate. There is a dispute between Yemen and Somalia's government over the island's sovereignty.

Montagne Cocotte is a 771 metre tall mountain peak in Mauritius. It is located in the far south of the island nation, in the Savanne District and in the Black River Gorges National Park. On the mountain slopes can be seen high altitude rainforest.

Ostrów is a village in the administrative district of Gmina Magnuszew, within Kozienice County, Masovian Voivodeship, in east-central Poland. It lies approximately 3 kilometres (2 mi) south-west of Magnuszew, 24 km (15 mi) north-west of Kozienice, and 58 km (36 mi) south-east of Warsaw. 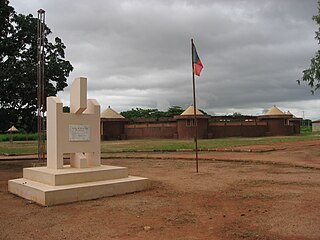 Musée en Plein Air de Parakou is a museum located approximately 1.5 kilometres south of the centre of the city Parakou, Benin in the suburbs. The museum consists of five circular complexes representing the traditional housing of the local Batanou peoples. The museum as of 2006 was in difficulty given that it lacks the funds and maintenance to allow it to fulfill its potential as a showcase. The museum charges a CFA franc 1500 entrance fee.

Jabal Bura is a granite mountain located in Bura east of Bajil, Yemen. The area is under consideration for inscription in UNESCO's list of sites that have "outstanding universal value."

ʿAmrān is a small city in western central Yemen. It is the capital of the 'Amran Governorate, and was formerly in the Sana'a Governorate. It is located 52.9 kilometres (32.9 mi) by road northwest of the Yemeni capital of Sana'a. According to the 2004 census it had a population of 76,863, and an estimated population of 90,792 in 2012.

Petit Soufrière is a small village on the east coast of Dominica, upland from Petite Soufrière Bay in Saint David Parish. Located on the steep, rugged slopes of Morne Aux Delices at the end of the main road south from Castle Bruce, it is one of the most isolated villages in Dominica. The village immediately to its north is Saint Sauveur; to its south, though connected only by a hiking trail, is Rosalie.

Magašići is a village in the municipality of Bratunac, Bosnia and Herzegovina.

Al Luḩayyah is a town on the Tihamah coastal plain, Yemen. It is located at around 15°42′14″N42°41′31″E. The port lies 4 miles (6 km) southwest of Al Luḩayyah, partially protected by the offshore island of Al-Urmak.

Revolution Hospital is the largest hospital in Yemen, located in the capital of Sana'a, immediately southwest of Ghumdan Palace. It is one of the largest building complexes in the city.

Yemen German Hospital is a hospital in Sana'a, Yemen. It is located in the south of the city, southwest of Al Sabeen Maternal Hospital and immediately south of Fun City along the 60 meters road and Hadda Street.

The Tsiribihina or Tsiribinha is a river of western Madagascar. It flows through Tsingy de Bemaraha National Park. The river is surrounded by mangroves.

The Mosque of Abu Bakr al-'Aydarus or Aidrus Mosque is a Sufi mosque in Aidrus Street in Crater, Aden Governorate, Yemen. One of the principal mosques in Aden, it is named after Abu Bakr al-Aydarus, the wali of Aden.