The National Monument is a sculpture that commemorates those who died in Malaysia's struggle for freedom, principally against the Japanese occupation during World War II and the Malayan Emergency, which lasted from 1948 until 1960. It is located in the Federal capital, Kuala Lumpur. The Malaysian Houses of Parliament is situated near the monument.

It is the world's tallest bronze freestanding sculpture grouping. [1] Every year on 31 July on Warriors' Day , the Yang di-Pertuan Agong, the Prime Minister, and the heads of the Malaysian Armed Forces and the Royal Malaysia Police pay their respects to the fallen heroes by laying garlands at the monument.

The predecessor of the National Monument is an interwar-era cenotaph originally erected by the colonial British administration on a 10m flat grass-covered ground on a roundabout adjoining Victory Avenue (now part of Jalan Sultan Hishamuddin) and Raja Road, close to the Kuala Lumpur Railway Station and Railway Administration Building. Originally intended to commemorate the Great War (1914–1918) and honour those from the British Malayan colonies who were killed in the war, the cenotaph's inscription would later include fallen British Malayan soldiers of World War II (1939–1945) after the conclusion of World War II and resumption of British rule. Names of the fallen are engraved on the plaques of the cenotaph as a token of tribute to their sacrifices.

In 1964, the cenotaph was moved from its original location to the site of the National Monument in Lake Gardens before a planned flyover connecting Jalan Sultan Hishamuddin and the Parliament roundabout was constructed over the original site. Transfer of the cenotaph was made possible by dismantling the structure into catalogued parts, allowing the structure to be transported in pieces and reassembled in its original form at the National Monument. Following its move, inscriptions were added to include fallen soldiers from the Malayan Emergency (1948–1960) and an archaic Malay translation of "To Our Glorious Dead", "Untok Mengingati Jasa Pahlawan-pahlawan Yang Gugor" ("To Remember the Service of Warriors Who Have Fallen").

The concept of a national monument was mooted by Malaysia's first Prime Minister Tunku Abdul Rahman, who was inspired by the Marine Corps War Memorial during his visit to the United States in October 1960, before personally meeting Felix de Weldon for a favour to design the monument.

The National Monument was completed and officially opened on 8 February 1966, by Ismail Nasiruddin of Terengganu, then Yang di-Pertuan Agong. It was proclaimed a memorial park dedicated to the 11,000 people who died during the 12-year Malayan Emergency (1948–1960). Thereafter, a wreath-laying ceremony takes place at the monument every 31 July on Warriors Day. De Weldon was later conferred with the title Tan Sri, the Malaysian equivalent of a high-ranking knighthood.

On 27 August 1975, the monument suffered extensive damage due to an explosion set off by a communist terrorist. It has since been restored to its original state with the renovated statues unveiled on 11 May 1977. A fence was then erected and the complex was declared a protected area between sunset and dawn. Every day at dawn, a soldier raises the national flag and lowers it at dusk.

Minister in the Prime Minister's Department Jamil Khir Baharom has stated that from 2010, the Warriors' Day commemoration service would be held elsewhere after Malaysia's National Fatwa Council guidelines declared the statues "un-Islamic" and potentially idolatrous. Defence Minister Zahid Hamidi added that a new "Warrior's Square" would be built in the country's administrative capital Putrajaya. When asked why the decision was made only after almost four decades of celebrating Warriors' Day at the present site, Jamil evaded comment, saying "Alhamdulillah, we are serious in solving this issue". [4] A similar sentiment would later be echoed in September 2016 by Harussani Zakaria, a Perak-based mufti, who declared that the construction of the monument had been a "big sin" and "idolatrous", because building monuments in the shape of humans was haram in Islam. [5]

Commissioned in 1963 and constructed in 1966, the sculpture that stands as a centrepiece of the monument is 15 meters (49.21 feet) tall, made of bronze and was designed by Austrian sculptor Felix de Weldon, who was also responsible for the Marine Corps War Memorial in Virginia, United States.

The sculpture depicts 7 figures, 5 of the figures [1. holding the Malaysian flag, 2. armed with a rifle and bayonet (left), 3. armed with a machine gun (right), 4. soldiers tending to fifth wounded compatriot] represents the victorious allied forces while the other 2 figures that lie on the ground represents that of the defeated communist forces.

Overall the monument depicts the victory of the forces of democracy, peace and freedom over that of communism. The sculpture was then cast at a foundry in Rome at a cost of RM600,000.

Each of the bronze figures symbolises leadership, suffering, unity, vigilance, strength, courage and sacrifice. The stones that the soldiers are standing on were imported from the small coastal city of Karlshamn in South Eastern Sweden.

The granite base of the sculpture bears the Malayan Coat of Arms, flanked on either side by inscriptions in English, Latin script, and also in Malay in Jawi script:

Dedicated to the heroic fighters in the cause of peace and freedom, May the blessing of Allah be upon them

Jalan Tugu, originally known as Cenotaph Road, refers to a road which was laid out following the completion of the cenotaph and adjoins the original cenotaph roundabout. The road was renamed to a direct Malay translation of the English name following a street renaming campaign during the 1960s, and continues to carry this name, as of 2013. The road runs parallel to the Kuala Lumpur Railway Station, and is located opposite the Railway Administration Building and National Mosque. 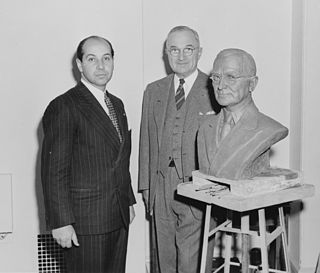 Felix Weihs de Weldon was an Austrian-born American sculptor. His most famous pieces include the United States Marine Corps War Memorial in Arlington County, Virginia and the Malaysian National Monument (1966) in Kuala Lumpur. 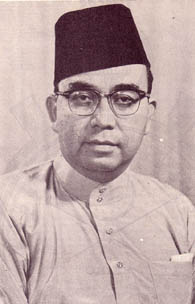 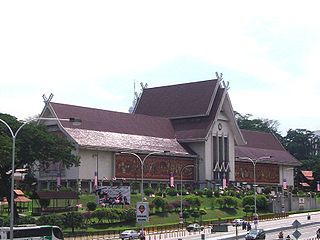 The National Museum is a museum located on Jalan Damansara in Kuala Lumpur, Malaysia. The museum is situated in close proximity to the Perdana Lake Gardens and it provides an overview of Malaysian history and culture. Its facade comprises elements of traditional Malay and modern features. It was opened on 31 August 1963, and it serves as a repository of Malaysia's rich cultural and historical heritage.

The National Mosque of Malaysia is a mosque in Kuala Lumpur, Malaysia. It has a capacity for 15,000 people and is situated among 13 acres (53,000 m2) of gardens. The original structure was designed by a three-person team from the Public Works Department: UK architect Howard Ashley, and Malaysians Hisham Albakri and Baharuddin Kassim. The engineer in charge of the construction of the mosque, which commenced in 1963 was Antony Morris. It was built on the site of a church, the Venning Road Brethren Gospel Hall, which had stood there since 1922 but was appropriated by the Malaysian government. The mosque is a bold and modern approach in reinforced concrete, symbolic of the aspirations of a then newly independent Malaysia.

The Federal Route 2 is a major east–west oriented federal highway in Malaysia. The 276.9 kilometres (172 mi) road connects Port Klang in Selangor to Kuantan Port in Pahang. The Federal Route 2 became the backbone of the road system linking the east and west coasts of Peninsula Malaysia before being surpassed by the East Coast Expressway E8. 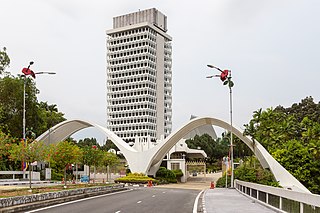 Keris Mas, born Kamaluddin Muhamad, was a prominent Malaysian literary figure and was one of the founders of the Asas '50 literary movement. His numerous contributions to Malay language literature led him to become Malaysia's first National Laureate in 1981.

Mohamed Noah bin Omar was a Malaysian politician. He was one of the leading figures during the founding of the United Malays National Organisation (UMNO) and became the first Speaker of the Dewan Rakyat.

This article lists important figures and events in Malaysian public affairs during the year 1973, together with births and deaths of notable Malaysians.

Jalan Damansara is a major road in Kuala Lumpur, Malaysia. One of the oldest roads in the city, it currently serves as a link between the Damansara sections of Petaling Jaya and Kuala Lumpur.

The Istana Negara is the official residence of the Yang di-Pertuan Agong, the monarch of Malaysia. It is located along Jalan Tuanku Abdul Halim in Segambut, northwestern Kuala Lumpur. The palace opened in 2011 and replaced the old Istana Negara which was located at a different compound in central Kuala Lumpur.

Nik Mohamed bin Nik Mahmood is a Director of Kumpulan Senireka Sdn Bhd., a large commercial architecture firm in Kuala Lumpur, Malaysia. Mahmood founded the firm in 1973 after he left the Public Works Department. The firm specializes in commercial highrise buildings, and they have done some significant religious buildings. In the 1970s they were operating in the Brutalist idiom, but they turned to Postmodernism at the end of the century and were responsible for some prominent postmodern buildings in Malaysia, including the Menara Axis, 2002, Istana Negara Baru and the Kompleks Dewan Bahasa & Pustaka.

Jalan Tuanku Abdul Halim, formerly known as Jalan Duta, is a major highway in Kuala Lumpur, Malaysia. It connects Segambut to the Parliament interchange on the Kuala Lumpur Middle Ring Road 1. It was named after the fifth and fourteenth Yang di-Pertuan Agong, Tuanku Abdul Halim Muadzam Shah of Kedah.