A "National Museum of Historical Artifacts and Fine Arts" was established in a Japanese style building near the Taipei Botanical Garden in 1955. It was renamed "National Museum of History" in 1956 and the building was renovated in a five-floor traditional Chinese Ming and Qing palace style, with four floors for exhibition and staff offices, and one floor for storage. Despite its limited space, the NMH is renowned for its international exhibitions, and proactive and innovative museum development and educational programs. Various conversions of the building have been carried out over the years to adapt it as a modern space fit for the newest exhibition facilities and requirements.

The NMH's collection originally comprised the artifacts of the Henan Museum that were relocated to Taiwan in 1949, and of relics recovered from the Japanese after the Sino-Japanese War. It was named the National Museum of History in 1949 and the Chinese calligraphy title inscription was completed by famous scholar Yu Youren. [1] The collection included bronzes unearthed in Xinzheng, Hui and Anyang (in Henan Province), Pre-Qin pottery unearthed in Luoyang, Han green-glazed pottery, dancer and musician figurines of the Six Dynasties, Tang tri-colored pottery, and more. The arrival of allocated artifacts and donations from private collectors gradually enriched the Museum's collection and enlarged its archives.

The museum collections continued to grow with annual acquisitions obtained with government procurement budget allocations and donations from private collectors. The annual acquisitions provided the museum with artifacts and relics from mainland China, Taiwan, and other countries. The collections dated back to the Neolithic period, the ancient Chinese dynasties of Shang, Zhou, Han, Tang, Song, Yuan, Ming, and Qing, to the contemporary era.

The National Museum of History has its branch in Terminal 1 building of the Taiwan Taoyuan International Airport in Taoyuan City.

The museum is accessible within walking distance South of Xiaonanmen Station or Chiang Kai-shek Memorial Hall metro station of the Taipei Metro. 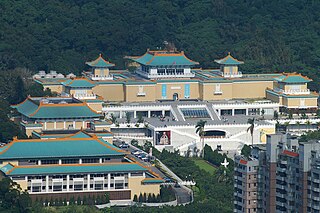 The National Palace Museum, located in Taipei, Taiwan, has a permanent collection of nearly 700,000 pieces of ancient Chinese imperial artifacts and artworks, making it one of the largest of its type in the world. The collection encompasses 8,000 years of history of Chinese art from the Neolithic age to the modern. Most of the collection are high quality pieces collected by China's emperors. The National Palace Museum shares its roots with the Palace Museum in the Forbidden City, whose extensive collection of artwork and artifacts were built upon the imperial collections of the Ming and Qing dynasties.

Taiwan Province is a nominal province of the Republic of China without administrative function. Its administrative powers have been transferred to the central and county governments.

Datong District or Tatung is a district of Taipei City, Taiwan. It is located between the Taipei Metro Red Line and eastern shore of the Tamsui River, and between Civic Boulevard and the Sun Yat-sen Freeway. The southern part of this area used to be the site of Twatutia, one of the first settlements in what is now Taipei and for a time the area's commercial center. Taipei's commercial center has since shifted south east to Zhongzheng, Daan and Xinyi, and Datong is far less important economically. One of the last vestiges of Twatutia's commercial importance disappeared with the closing of the Chien-Cheng Circle in 2006. The north was the site of the village of Daronpon.

The Henan Museum, located in Zhengzhou, Henan Province, China, is a history and archaeology museum. It has a collection of more than 130,000 pieces of cultural relics through the ages. In addition to its collection of human history the museum is also home to many relics of natural history including dinosaur bones and fossils. Henan Museum's present building, which opened in 1997, occupies an area of more than 100,000 square feet, with a total floor space of 78,000 square feet. 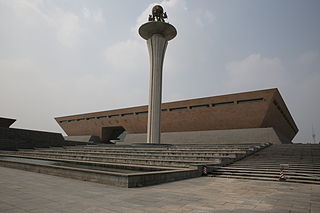 Luoyang Museum is a historical museum in Luoyang, Henan Province, China. Situated in the Yellow River valley. It offers exhibits of the rich cultural heritage of Luoyang, a major Chinese cultural centre, which was the capital of numerous Chinese dynasties including the Eastern Zhou and the Eastern Han. 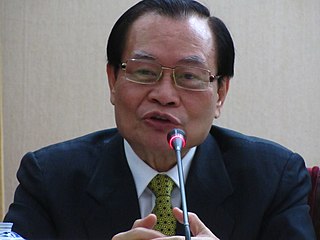 Hsu Yung Chin is a Taiwanese artist and calligrapher. Originally known for traditional Chinese calligraphy, in the 1990s he began to gain renown for his postmodernist calligraphy and ink paintings.

Apollo Chen, also known as Chen Shei-saint is a Taiwanese journalist and politician.

Chang Tien-chin is a Taiwanese politician. He was the deputy minister of the Mainland Affairs Council. 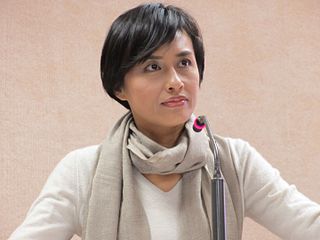 Chiu Yi-ying is a Taiwanese politician. She has served four terms in the Legislative Yuan, one term in the National Assembly, and from 2005 to 2008 was the deputy minister of Hakka Affairs Council.

Chen In-chin is a Taiwanese politician. He was the Chairperson of Central Election Commission from 17 November 2017 to 25 November 2018. 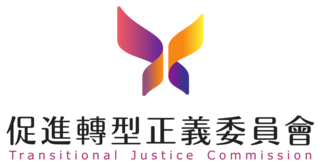 The Transitional Justice Commission is an independent government agency of the Republic of China (Taiwan), established by the Act on Promoting Transitional Justice on 31 May 2018. The commission is responsible for the investigation of actions taken by the Kuomintang between 15 August 1945 and 6 November 1992. The commission's main aims include: making political archives more readily available, removing authoritarian symbols, redressing judicial injustice, and producing a report on the history of the period which delineates steps to further promote transitional justice.