The National Public Health Emergency Team for COVID-19 (NPHET) ( /ˈnɛfət/ ; Irish : Foireann Náisiúnta Éigeandála Sláinte Poiblí do COVID-19) [1] is a political organisation within Ireland's Department of Health that oversees and provides national direction, support, guidance and expert advice on developing and implementing a strategy to control the coronavirus disease 2019 (COVID-19) pandemic in Ireland. [2]

This NPHET was established on 27 January 2020 in order to deal with the emerging SARS-CoV-2 problem. [3]

NPHET was monitoring the spread of the virus before it was confirmed to have reached Ireland. [4] [5] When established in 2020, it initially had a medium-sized room in the Department of Health. [6] It then moved to a larger room as events developed. [6] Eventually, with the spread of the virus, the daily meetings were conducted remotely using Zoom. [6]

The first known case of COVID-19 to have arrived in Ireland was announced on 27 February 2020, in a woman who had been skiing in Northern Italy and had flown back through Dublin Airport, travelled by bus to Connolly station (Ireland's busiest railway station) before exiting into Northern Ireland by train; her case was confirmed two days later. [7] The first known case of COVID-19 in a resident of the Republic of Ireland was confirmed in the county of Dublin on 29 February 2020, in a secondary school student who had returned from an affected area in Northern Italy. [8] [9]

NPHET continued to meet after the virus had arrived in Ireland to co-ordinate the national response to the pandemic. [10] [11]

Chief Medical Officer Dr Tony Holohan chairs NPHET, with the support of six deputy chief medical officers. Meetings tend to start with an epidemiology report on the latest viral developments in Ireland. [6] Holohan asks for the perspectives of public health doctors. [6] Two letters are drafted at the end of each meeting, one for the Taoiseach and the other for the Minister for Health. [6] In addition, before each meeting, Holohan gives its agenda to the Minister for Health in a call and queries if the government has anything specific they wish to have discussed. [6] Holohan stepped down as chief medical officer on 2 July 2020 for family reasons; [12] [13] Deputy Chief Medical Officer Ronan Glynn was subsequently appointed Acting Chief Medical Officer. [14] Holohan returned in October 2020. [15]

NPHET has used press briefings to communicate updates, guidelines, statistics and policy changes to the public during the COVID-19 pandemic in Ireland. [16] [17] [18] [19]

After it emerged that the agenda and meeting notes of NPHET had not been published since the end of March, and following calls in Dáil Éireann for be rectified, minutes were subsequently published at the end of April. [20] [21] Shortly before this, NPHET published details of its governance structure. [22] [23]

Members are from the Department of Health, HSE, HIQA, HPSC, ICGP and HPRA, as well as consultants, epidemiologists and the Coronavirus Expert Advisory Group and the Irish Epidemiological Modelling Advisory Group. [6] [24] Three new members were appointed to the National Public Health Emergency Team on 6 January 2021. [25]

The Coronavirus Expert Advisory Group is a subgroup of NPHET. [26]

It is chaired by Cillian de Gascun, the UCD-based Director of the National Virus Reference Laboratory. [27]

The Coronavirus Expert Advisory Group met for the first time on 5 February 2020 in Dublin. [28]

The Acute Hospital Preparedness Subgroup was formed on 3 March 2020 and met for the first time on 4 March 2020. It provides assurance on the preparedness of the acute hospital system to tackle significant increases in hospital admissions, and that plans for preparedness are being implemented across the public hospital system. [29]

It is chaired by Tracey Conroy, Assistant Secretary, Acute Hospitals Policy Division at the Department of Health. [24]

The Behavioural Change Subgroup was formed on 18 March and is made up of nine members. [24] It was set up to provide insights and evidence to support the communications strategy and the wider work of NPHET. [30]

It is chaired by Kate O'Flaherty, Head of Health and Wellbeing at the Department of Health. [24]

The Guidance and Evidence Synthesis Subgroup was formed to facilitate information exchange on the public health and clinical guidance relating to COVID-19. The subgroup provides assurance to NPHET on coordination of surge evidence synthesis capacity to support the development of guidance. [31]

It is chaired by Máirín Ryan, Deputy Chief Executive and Director of Health Technology Assessment at HIQA. [24]

The Irish Epidemiological Modelling Advisory Group (IEMAG) is a modelling group of NPHET [24] formed on 11 March 2020 to provide statistical support and advice to NPHET and the Chief Medical Officer. [32] Staff at University College Dublin and other mathematical researchers in Ireland are involved in developing mathematical models for stages of the COVID-19 pandemic. [33]

It is chaired by Philip Nolan, the former president of Maynooth University. [34] [35]

Following speculation that NPHET would be disbanded from mid-October 2021, [36] Taoiseach Micheál Martin confirmed that the team would cease to exist as a separate body over time and that their role and the COVID-19 vaccination taskforce would be transitioned into the normal functions of the Department of Health and the HSE, after the Government published a plan for easing most COVID-19 restrictions by 22 October. [37] 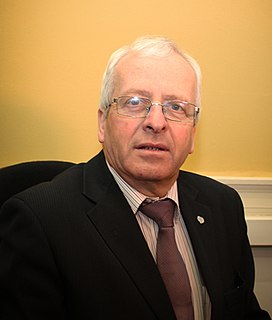 Matthew McGrath is an Irish Independent politician and a Teachta Dála (TD) for the Tipperary constituency since being elected at the 2007 general election.

The Chief Medical Officer (CMO) for Ireland is the most senior government advisor on health-related matters. It is a government post as the lead medical expert in the Department of Health.

Rose Anne Kenny is an Irish geriatrician. She is a professor of Medical Gerontology at Trinity College Dublin (TCD), director of the Falls and Black-out Unit at St James' Hospital Dublin, director of the Mercer's Institute for Successful Ageing and founding principal investigator for the Irish Longitudinal Study on Ageing (TILDA). She was admitted in 2014 to the Royal Irish Academy, the highest academic honour available in Ireland, in recognition of academic excellence and achievement. Kenny is a fellow of Trinity College Dublin and of the Royal College of Physicians in Ireland, London and Edinburgh.

Events during the year 2020 in Ireland. As in most of the world, the COVID-19 pandemic dominated events in Ireland during this year. 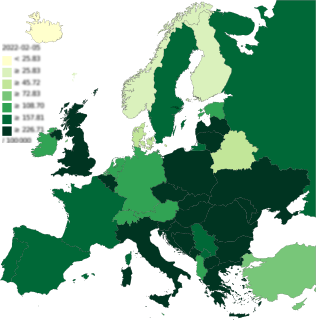 The global COVID-19 pandemic arrived in Europe with its first confirmed case in Bordeaux, France, on 24 January 2020, and subsequently spread widely across the continent. By 17 March 2020, every country in Europe had confirmed a case, and all have reported at least one death, with the exception of Vatican City. 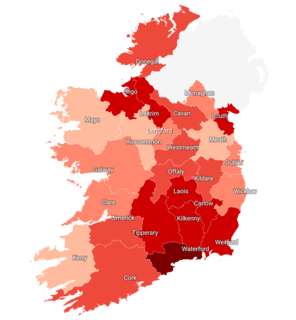 The COVID-19 pandemic in the Republic of Ireland is part of the worldwide COVID-19 pandemic caused by severe acute respiratory syndrome coronavirus 2 (SARS-CoV-2). The virus reached the country in late February 2020 and within three weeks, cases had been confirmed in all counties. The pandemic affected many aspects of society. The government shut all schools, colleges, childcare facilities and cultural institutions on 12 March 2020. All large gatherings were cancelled, including St Patrick's Day festivities two years running. On 24 March 2020, almost all businesses, venues and amenities were shut, and on 27 March, the first stay-at-home order banned all non-essential travel and contact with other people. The elderly and those with certain illnesses were told to cocoon. People were made to keep apart in public. The Oireachtas passed an emergency act giving the state power to detain people, restrict travel and keep people in their homes to control the virus's spread. Further emergency law passed the following week. The Garda Síochána were given power to enforce the lockdowns.

A National Public Health Emergency Team (NPHET) is a group within Ireland's Department of Health.

The following is a timeline of the COVID-19 pandemic in the Republic of Ireland from January to June 2020.

Professor Philip Nolan is the chair of NPHET's Irish Epidemiological Modelling Advisory Group since March 2020. He previously served as president of Maynooth University from August 2011 to October 2021, a medical and surgical intern at St. Vincent's University Hospital from 1991 to 1992, and deputy president of University College Dublin for academic affairs and registrar from 2004 to 2011.

The COVID-19 pandemic in the Republic of Ireland has impacted the country's judicial system. Several people were arrested for COVID-19-related offences, while prisoners were released. Two operations, Operation Fanacht and Operation Navigation, were launched.

The following is a timeline of the COVID-19 pandemic in the Republic of Ireland from July to December 2020.

The COVID-19 pandemic has impacted and affected the political system of the Republic of Ireland, causing suspensions of legislative activities and isolation of multiple politicians due to fears of spreading the virus. Several politicians have tested positive for COVID-19 in 2020 and 2021.

Events during the year 2021 in Ireland. As in most of the world, the COVID-19 pandemic has dominated events in Ireland during this year.

Cillian de Gascun is an Irish consultant virologist who has served as Director of the National Virus Reference Laboratory in UCD since 2013 and the Chair of the NPHET Coronavirus Expert Advisory Group since 5 February 2020. 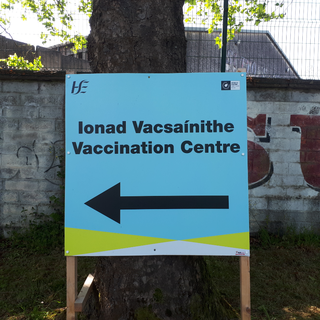 The COVID-19 vaccination programme in the Republic of Ireland is an ongoing mass immunisation campaign that began on 29 December 2020 in response to the COVID-19 pandemic in the Republic of Ireland. Ireland's vaccination rollout has been praised as one of the most successful rollouts in the world and was ranked number one in the European Union in terms of its percentage of adult population fully vaccinated.

The National Immunisation Advisory Committee (NIAC) is an Irish advisory body that advises the Chief Medical Officer and Department of Health in the area of immunisation procedures and related matters. NIAC was established within the Royal College of Physicians of Ireland (RCPI) in 1998. It comprises representatives from a broad range of medical and healthcare organisations with expertise in immunisation.