National Rally for Development and Progress

The National Rally for Development and Progress (French : Rassemblement national pour le développement et le progrès, also known as VIVA) is a political party in Chad, led by Delwa Kassiré Koumakoye. It was founded in early 1992, [1] with Koumakoye as its president. [2]

In the parliamentary election held on 21 April 2002, the party won five out of 155 seats; [3] all five of these were in Kélo constituency in Tandjilé Ouest Department, where the party won all of the available seats. In the May 2006 presidential election, its candidate, Koumakoye, won 15.13% of the vote. [4] Koumakoye was Prime Minister from February 2007 to April 2008.

The Congress for Democracy and Progress was the ruling political party in Burkina Faso until the overthrow of Blaise Compaoré in the year 2014.

Fidèle Abdelkérim Moungar is a Chadian politician who served as Prime Minister of Chad in 1993. He is currently Secretary-General of Chadian Action for Unity and Socialism (ACTUS), a left-wing opposition party. 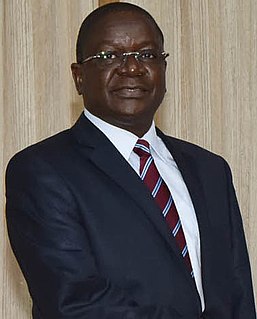 Albert Pahimi Padacké is a Chadian politician who was the last Prime Minister of Chad serving from 2016 to 2018.

Youssouf Saleh Abbas is a Chadian political figure who was Prime Minister of Chad from April 2008 to March 2010. He was previously a diplomatic adviser and special representative of President Idriss Déby.

Justin Lekoundzou Itihi Ossetoumba is a Congolese politician. He is a founding member of the Congolese Labour Party (PCT), and during the PCT's single-party rule he held important party and government positions in the 1970s and 1980s. He served in the government again from 1997 to 2002 and was elected to the National Assembly of Congo-Brazzaville in 2002.

Aimé Emmanuel Yoka is a Congolese politician who served in the government of Congo-Brazzaville as Minister of State for Justice from 2007 to 2016. Previously he was Director of the Cabinet of President Denis Sassou Nguesso from 2002 to 2007.

Léon-Alfred Opimbat is a Congolese politician. He served in the government of Congo-Brazzaville as Minister of Health from 1992 to 1993 and as Minister of National Solidarity and Humanitarian Action from 1997 to 2002, with additional responsibility for the health portfolio beginning in 1999. Subsequently he was a Deputy in the National Assembly from 2002 to 2007 and again from 2007 to 2011. He was also President of the New Democratic Forces (FDN), a political party, from 2007 to 2011; when the FDN merged itself into the ruling Congolese Labour Party (PCT) in July 2011, Opimbat became a member of the PCT Political Bureau. He was Minister of Sports from 2011 to 2017, and he has been First Vice-President of the National Assembly since 2017.

Pierre-Claver Zeng Ebome was a Gabonese politician and musician. He held a succession of ministerial portfolios in the government of Gabon during the 1990s and subsequently served as a Deputy in the National Assembly of Gabon. Zeng Ebome was the President of the African Development Movement (MAD), a minor political party, until February 2010, when it merged itself into the National Union; afterward he was briefly a Vice-President of the National Union from February 2010 to May 2010.

Pierre-Ernest Abandzounou was a Congolese politician. He served in the government of Congo-Brazzaville as Secretary of State for Scientific Research from August 2002 to January 2005 and then as Minister of Scientific Research from January 2005 to December 2007. He was also the President of the Action Committee for Progress (CAP) from 2005 to 2011. Starting in 2012, he was Congo-Brazzaville's Ambassador to Chad.