Last updated December 30, 2019
In this Japanese name, the family name is Kyogoku.

Three of his novels have been turned into feature films; Mōryō no Hako , which won the 1996 Mystery Writers of Japan Award, was also made into an anime television series, as was Kosetsu Hyaku Monogatari, and his book Loups=Garous was adapted into an anime feature film. Vertical have published his debut novel as The Summer of the Ubume . [4]

Kyogoku was born in Otaru, Hokkaido. After dropping out of Kuwasawa Design School, he worked as a publicity agent and established a design company. In 1994, Kodansha published his first novel The Summer of the Ubume (姑獲鳥の夏, Ubume no Natsu). He has since written many novels, and received two Japanese literary prizes; Kyogoku won the 16th Yamamoto Shūgorō Prize for Nozoki Koheiji (覘き小平次) in 2003, and won the 130th Naoki Prize for Nochi no Kōsetsu Hyaku Monogatari (後巷説百物語) in 2004. [5]

Most of his works are concerned with yōkai, creatures from Japanese folklore; he describes himself as a yōkai researcher. This preference was strongly influenced by Shigeru Mizuki (水木しげる), who is an eminent yokai specialist. [6] Kyogoku participates in Mizuki's World Yōkai Association and is a member of the Kanto Mizuki Association and the Research Institute of Mysterious and Marvelous East Asian phenomena.

Kyogoku considers yōkai folklore to be a form of sublimation and applied this idea to his novels. [7] His works are often advertised as yōkai novels by the publisher, and their covers reflect this. Nevertheless, in his writing, yōkai themselves don't appear, except as fables, which serve to explicate the criminal characters' motives. For example, in The Summer of the Ubume , ubume is introduced as part of a ghostly expectant mother folklore, considered to be an expression of hate. [8] However, ubume doesn't actually appear until the end.

In Kyogoku's works, especially the Kyōgokudō (京極堂) Series, the main character Akihiko Chuzenji (中禅寺 秋彦, Chūzenji Akihiko) solves a case by clearing up a possession; this technique is called Tsukimono-Otoshi, the most striking aspect of his novels. This term is from Onmyōdō: the exorcism of yōkai, demons or ghosts. Chuzenji does Tsukimono-Otoshi as part of his rhetoric he uses in exposing the criminal character's hidden pathos, and likens the emotion to a particular yōkai folklore. This often solves the mystery, but this result is only an unexpected by-product for Chuzenji.

Another characteristic of his work is book design: cover, thickness and layout. As explained above, he has founded a design company before, and after he became a novelist, has been working as a designer too. Therefore, remarkably for novelists, he is always concerned with the binding process of his works directly, and sometimes designs other novelists' books, e.g., Gankyū Kitan (眼球綺譚), Yukito Ayatsuji (綾辻行人). [9]

The layout of Kyogoku's writing is arranged according to his own rules. A sentence never crosses over a page break. Moreover, every time a new version is published, Kyogoku always lays out the work again according to this rule. He explained the intention, "I made it possible for readers to stop reading whenever they want to. If one sentence steps over, readers who are weary of reading must turn over the page. I sense that is contemptible, because not interest to the story but physical factor force readers to read." [11] Second, many kanji characters in his writing are invariably given kana characters alongside. Kyogoku can use DTP software perfectly, so he freely writes old-fashioned characters and ateji characters with the purpose of capturing old Japanese atmosphere in his novels. However, such characters are difficult even for Japanese people to read. Therefore, giving kana characters alongside kanji characters in his writing is essential for readers to be able to understand those characters' meaning. [12] Third, sentences are marked out by entering null lines before and after them on purpose. That technique enables readers to perceive the curious blank where the important sentences are written. [13] In these ways, Kyogoku always keeps readability in mind, and dedicates himself not only to sentences but also the layout. [11] These qualities do not, however, carry over to the English translations of his books.

The Wicked and the Damned: A Hundred Tales of Karma series 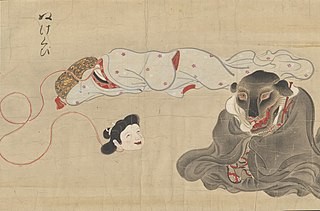 The rokurokubi is a type of Japanese yōkai (apparition). They look almost completely like humans, with one major difference. There are two types of Rokurokubi: one whose neck stretches, and one whose head comes off and flies around freely (nukekubi). The Rokurokubi appear in classical kaidan and in yōkai works. It has been suggested, however, that the idea of rokurokubi may have been created purely for entertainment purposes rather than originating from any folk beliefs or legends.

Teito Monogatari is an epic historical dark fantasy/science fiction work; the debut novel of natural history researcher and polymath Hiroshi Aramata. It began circulation in a literary magazine owned by Kadokawa Shoten in 1983, and was published in 10 volumes over the course of 1985–1987. The novel is a romanticized retelling of the 20th-century history of Tokyo from an occultist perspective. 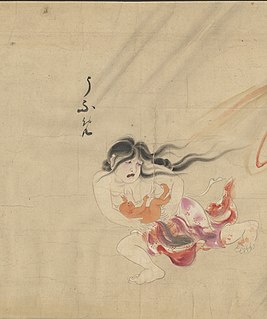 Ubume (産女) are Japanese yōkai of pregnant women. They can also be written 憂婦女鳥. Throughout folk stories and literature the identity and appearance of ubume varies. However, she is most commonly depicted as the spirit of a woman who has died during childbirth. Passersby will see her as a normal looking woman carrying a baby. She will typically try to give the passerby her child then disappear. When the person goes to look at the child in their arms, they discover it is only a bundle of leaves or large rock. The idea that when pregnant woman who die and get buried become "ubume" has existed since ancient times, which is why it has been said that when a pregnant woman dies postpartum, one ought to cut the fetus out the abdomen and put it on the mother in a hug as they are buried. In some regions, if the fetus cannot be cut out, a doll would be put beside her.

The Wicked and the Damned: A Hundred Tales of Karma is a series of short story collections by Natsuhiko Kyogoku. It was made into a horror/crime/mystery anime series Requiem from the Darkness, initially licensed in English by Geneon USA and now licensed by Discotek Media, and into a series of live action TV specials directed by Yukihiko Tsutsumi.

Monthly Comic Ryū is a Japanese monthly seinen manga and anime magazine published by Tokuma Shoten. The magazine was originally a quarterly special issue of Animage, beginning in 1979 before switching to a monthly schedule and finally suspending publication. On November 19, 2006, the magazine began to be published again, with the first new issue coming with a DVD of the exclusive OVA Onna Tachiguishi-Retsuden directed by world famous director Mamoru Oshii.

Aobōzu is a Japanese yōkai. Legends under this name can be found in many parts of Japan, but exactly what it is can vary. There is also a picture under this name in the picture collection Gazu Hyakki Yagyō by Toriyama Sekien.

The Ehon Hyaku Monogatari (絵本百物語), also called the Tōsanjin Yawa (桃山人夜話) is a book of yōkai illustrated by Japanese artist Takehara Shunsensai, published about 1841. The book was intended as a followup to Toriyama Sekien's Gazu Hyakki Yagyō series. Like those books, it is a supernatural bestiary of ghosts, monsters, and spirits which has had a profound influence on subsequent yōkai imagery in Japan.

Hyakkai-Zukan (百怪図巻) is a picture scroll by Edo period Japanese artist Sawaki Suushi. Completed in 1737, this scroll is a supernatural bestiary, a collections of ghosts, spirits and monsters, which Suushi based on literature, folklore, other artwork. These images had a profound influence on subsequent yōkai imagery in Japan for generations.

Mōryō no Hako is a Japanese novel by Natsuhiko Kyogoku. It is the second novel in the Kyōgokudō series that began with Summer of the Ubume. The novel has been turned into a live action feature film, a manga, and an anime television series. 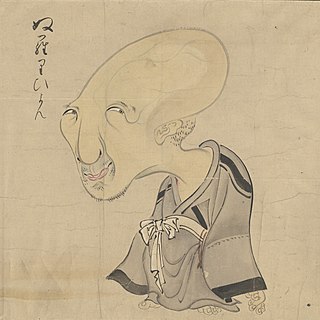 Nurarihyon is a Japanese yōkai.

Loups=Garous is a 2010 animated science fiction film. It was directed by Junichi Fujisaku and produced by Production I.G and TransArts. The movie was released on August 28, 2010. Features music by the rock band SCANDAL, who are also featured in the film as cameos. It is licensed in North America by Sentai Filmworks and in United Kingdom by Manga UK. It is available for purchase on DVD and Blu-ray.

The Summer of the Ubume is a Japanese novel by Natsuhiko Kyogoku. It is Kyogoku’s first novel, and the first entry in his Kyōgōkudō series about atheist onmyōji Akihiko "Kyōgokudō" Chūzenji. It has been turned into a live-action feature film. 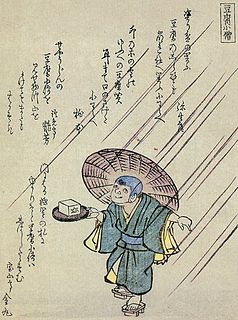 Tōfu-kozō is a yōkai of Japan that takes on the appearance of a child possessing a tray with tōfu on it. It frequently appears in the kusazōshi and kibyōshi and kaidan books from the Edo period, and from the Bakumatsu to the Meiji period, people have become familiar with them as a character illustrated on toys such as kites, sugoroku, and karuta. They can also be seen in senryū, kyōka, e-hon banzuke, and nishiki-e, etc.

Tesso (鉄鼠) is a Japanese yōkai related to the vengeful spirit (onryō) of the Heian period monk Raigō and a mouse. The name "tesso" is a name given by Toriyama Sekien in the Edo period collection of yōkai pictures, the Gazu Hyakki Yagyō, and this yōkai can also be called the Raigo-derived name Raigō-nezumi (頼豪鼠) as from the Enkyōhon, a yomihon version of the Heike Monogatari, or Mii-dera-nezumi (三井寺鼠) derived from Mii-dera in Ōtsu, Shiga Prefecture as in the Edo period yōkai themed kyōka picture book, the Kyōka Hyaku Monogatari. They became known starting in the Heisei period from its adoption in the mystery novel Tesso no Ori by Natsuhiko Kyogoku. 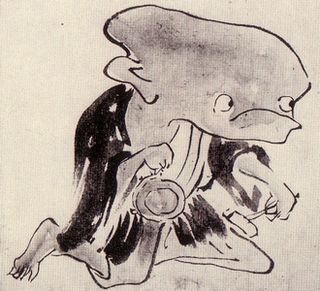 The Buson yōkai emaki (蕪村妖怪絵巻) is an 18th century collection of "picture scrolls" depicting Japanese yōkai by poet and painter Yosa Buson. The whereabouts of the original work are presently unclear; its contents are known from a reprinting released by the Kitada Shisui Collection in 1928. 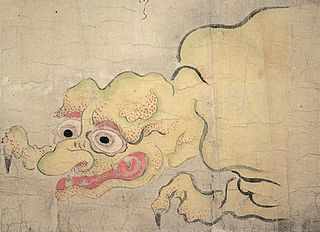