The Navya-Nyāya or Neo-Logical darśana (view, system, or school) of Indian logic and Indian philosophy was founded in the 13th century CE by the philosopher Gangeśa Upādhyāya of Mithila and continued by Raghunatha Siromani of Nabadwipa in Bengal. It was a development of the classical Nyāya darśana. Other influences on Navya-Nyāya were the work of earlier philosophers Vācaspati Miśra (900–980 CE) and Udayana (late 10th century). It remained active in India through to the 18th century.

Gangeśa's book Tattvacintāmaṇi ("Thought-Jewel of Reality") was written partly in response to Śrīharśa's Khandanakhandakhādya, a defence of Advaita Vedānta, which had offered a set of thorough criticisms of Nyāya theories of thought and language. In his book, Gangeśa both addressed some of those criticisms and – more important – critically examined the Nyāya darśana itself. He held that, while Śrīharśa had failed to successfully challenge the Nyāya realist ontology, his and Gangeśa's own criticisms brought out a need to improve and refine the logical and linguistic tools of Nyāya thought, to make them more rigorous and precise.

Tattvacintāmani dealt with all the important aspects of Indian philosophy, logic, set theory, and especially epistemology, which Gangeśa examined rigorously, developing and improving the Nyāya scheme, and offering examples. The results, especially his analysis of cognition, were taken up and used by other darśanas.

Navya-Nyāya developed a sophisticated language and conceptual scheme that allowed it to raise, analyse, and solve problems in logic and epistemology. It systematised all the Nyāya concepts into four main categories which are (sense-) perception (pratyakşa), inference (anumāna), comparison or similarity (upamāna), and testimony (sound or word; śabda ). Prof John Vattanky has contributed significantly to the modern understanding of Navya-Nyāya. [1]

Willard Van Orman Quine was an American philosopher and logician in the analytic tradition, recognized as "one of the most influential philosophers of the twentieth century." From 1930 until his death 70 years later, Quine was continually affiliated with Harvard University in one way or another, first as a student, then as a professor. He filled the Edgar Pierce Chair of Philosophy at Harvard from 1956 to 1978.

Nyāya, literally meaning "rules", "method" or "judgment", is one of the six orthodox (astika) schools of Hinduism. This school's most significant contributions to Indian philosophy was systematic development of the theory of logic, methodology, and its treatises on epistemology.

Gangesha Upadhyaya was an Indian philosopher and mathematician from the kingdom of Mithila. He established the Navya-Nyāya school. His Tattvacintāmaṇi, also known as Pramāṇacintāmaṇi, is the basic text for all later developments. The logicians of this school were primarily interested in defining their terms and concepts related to non-binary logical categories. 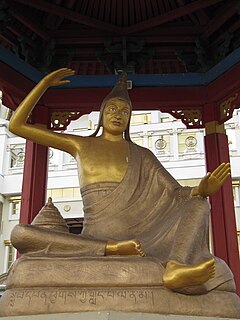 Dignāga was an Indian Buddhist scholar and one of the Buddhist founders of Indian logic. Dignāga's work laid the groundwork for the development of deductive logic in India and created the first system of Buddhist logic and epistemology (Pramana). 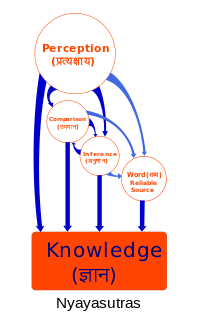 Early Islamic law placed importance on formulating standards of argument, which gave rise to a "novel approach to logic" in Kalam . However, with the rise of the Mu'tazili philosophers, who highly valued Aristotle's Organon, this approach was displaced by the older ideas from Hellenistic philosophy. The works of al-Farabi, Avicenna, al-Ghazali and other Persian Muslim logicians who often criticized and corrected Aristotelian logic and introduced their own forms of logic, also played a central role in the subsequent development of European logic during the Renaissance. The use of Aristotelian logic in Islamic theology again began to decline from the 10th century, with the rise of Ashʿari theology to the intellectual mainstream, which rejects causal reasoning in favour of clerical authority.

Pramana literally means "proof" and "means of knowledge". In Indian philosophies, pramana are the means which can lead to knowledge, and serve as one of the core concepts in Indian epistemology. It has been one of the key, much debated fields of study in Buddhism, Hinduism and Jainism since ancient times. It is a theory of knowledge, and encompasses one or more reliable and valid means by which human beings gain accurate, true knowledge. The focus of pramana is how correct knowledge can be acquired, how one knows, how one doesn't, and to what extent knowledge pertinent about someone or something can be acquired.

Raghunatha Shiromani was an Indian philosopher and logician. He was born at Nabadwip in present-day Nadia district of West Bengal state. He was the grandson of Śulapāṇi, a noted writer on Smṛti from his mother's side. He was a pupil of Vāsudeva Sārvabhauma. He brought the new school of Nyaya, Navya Nyāya, representing the final development of Indian formal logic, to its zenith of analytic power.

Buddhist logico-epistemology is a term used in Western scholarship for pramāṇa-vāda and Hetu-vidya. Pramāṇa-vāda is an epistemological study of the nature of knowledge; Hetu-vidya is a system of logic. These models developed in India during the 5th through 7th centuries.

Rev. John Vattanky SJ is a Jesuit priest, belonging to Kerala province, in India. An Indian Philosopher, specializing in Gangesa's Navya-Nyāya, he resides at De Nobili College, Pune. Vattanky is a Professor Emeritus of Jnana-Deepa Vidyapeeth, Pune, India. He has contributed significantly to the growth of Indian philosophy and Indian Christian Theology.