Of Ngāi Tahu descent, Parata was born at Puketeraki, near Karitane. He was the youngest son of Tame Parata and younger brother of Taare Parata. Educated at Te Aute College, Parata became a rugby union administrator after his playing days were ended by serious illness. He organised the first official New Zealand Māori rugby team in 1910 and managed the side on its tour of Australia. [1] He underwrote the cost of touring with the profits from his motor car business. [2] He subsequently managed the team on tours to Australia in 1913, 1922 and 1923. [3] He also managed the team on their 1926–27 tour of New Zealand, Australia, Ceylon, France, England, Wales and Canada. [1]

Parata stood for election to the New Zealand parliament as the United/Reform Coalition candidate in the 1932 Southern Maori by-election. He was unsuccessful, finishing a distant second behind the Ratana candidate Eruera Tirikatene.

In the 1948 King's Birthday Honours, Parata was appointed an Officer of the Order of the British Empire for services to the Māori people. [4]

Parata died at Seacliff Hospital near Dunedin in 1949. [1]

George Nēpia was a New Zealand Māori rugby union and rugby league player. He is remembered as an exceptional full-back and one of the most famous Māori rugby players. He was inducted into the New Zealand Sports Hall of Fame in 1990. In 2004 he was selected as number 65 by the panel of the New Zealand's Top 100 History Makers television show. Nēpia was featured in a set of postage stamps from the New Zealand post office in 1990. Historian Philippa Mein Smith described him as "New Zealand rugby's first superstar".

The following lists events that happened during 1926 in New Zealand.

The Māori All Blacks, previously called the New Zealand Maori, New Zealand Maoris and New Zealand Natives, are a rugby union team from New Zealand. They are a representative team of the New Zealand Rugby Union, and a prerequisite for playing is that the player has Māori whakapapa (genealogy). In the past this rule was not strictly applied; non–Māori players who looked Māori were often selected in the team. These included a few Pacific island players and a couple of African descent. Today all players have their ancestry verified before selection in the team.

Manuera Benjamin Rīwai Couch was a New Zealand politician and rugby union player. He was a team-member of the All Blacks and the New Zealand Māori rugby union team in the 1940s. 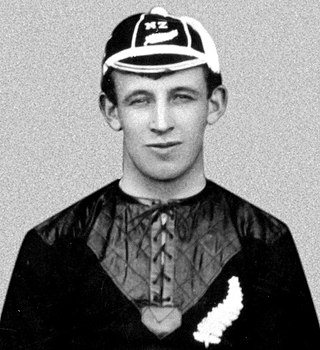 Billy Stead, born John William Stead, was a rugby union player born in Invercargill who played for New Zealand, the All Blacks, on their 1905–06 tour. Stead also played provincially for Southland, and later coached various teams, including Southland and the New Zealand Māori. A bootmaker by trade, he also co-authored The Complete Rugby Footballer with Dave Gallaher, and was a columnist for the Southland Times, and New Zealand Truth.

John Rees Glyn Stephens was a Welsh international rugby union player who played club rugby for Tonmawr RFC and Neath. He won 32 caps for Wales and was selected to play in the British Lions on the 1950 tour of Australia and New Zealand. He was the son of a past Welsh rugby international, Glyn Stephens, who was also president of the Welsh Rugby Union.

John Hopere Wharewiti Uru, sometimes known as Billy Uru, was a New Zealand Māori sportsman and politician. He represented Canterbury at both cricket and rugby union, and was an Independent Member of Parliament for Southern Maori.

Colin "Col" Windon, was a rugby union player and soldier who captained Australia – the Wallabies – in two Test matches in 1951. By age 18 Windon was playing at flanker for his club Randwick in Sydney's Shute Shield. After serving with the Second Australian Imperial Force in the Pacific Theatre during the Second World War, Windon resumed his rugby career in 1946. He was first selected for Australia for their tour of New Zealand that year. Despite the Wallabies losing both their Tests on tour, Windon impressed with his play.

Katherine Te Rongokahira Parata (1873–1939) was a New Zealand woman of mana. Of Māori descent, she identified with the Ngāti Pikiao, Ngāti Pūkenga and Te Arawa iwi. She was born in Tauranga, Bay of Plenty, New Zealand in 1873. Two of her brothers, Albert and Ernie Asher, played professional rugby league, and another brother John became a Ngati Pukenga and Ngati Pikiao leader. In 1896, she married Taare Parata. Her husband would later be elected as the representative of the Southern Maori electorate; at the time of their wedding, her father-in-law, Tame Parata, was the electorate's current representative. Ned Parata, a rugby union administrator, was her brother-in-law.

John Burns Smith was a New Zealand rugby union player, soldier, sportsman and baker. He was an All Black captain, and despite only playing nine matches is recognised as a great. His 26 appearances for the Second New Zealand Expeditionary Force rugby team, which toured the UK in 1946–47, earned him high praise. He also played for the New Zealand Māori, being of Ngāpuhi descent.

Parata is a Māori surname. It is a transliteration of the English word "brother" or "brothers".

Captain Walter "Wattie" Pukauae Barclay,MM, QSM, was a New Zealand rugby union player, sports administrator and military officer. He captained the New Zealand Māori Rugby Team and holds the record for the highest number of tries scored for the team with 40 career tries.