Cornelius Aaron "Neil" Dougherty (April 14, 1961 – July 5, 2011) was an American basketball coach, most recently the head coach at Texas Christian University in Fort Worth, Texas. Dougherty played basketball at West Point for two years under coach Mike Krzyzewski before transferring to Cameron University, where he played his final two years and earned his degree in 1984.

Dougherty began his coaching career in 1984 at Cameron, where he served as an assistant until 1988. He then moved on to take similar positions at Drake, Vanderbilt and South Carolina. He was an assistant of Roy Williams at University of Kansas for many years. He also served under Head Coach Eddie Fogler at Vanderbilt and South Carolina. In 1990 under Fogler and Dougherty, Vanderbilt won the National Invitation Tournament (NIT).

On March 25, 2002, Dougherty was hired as the 18th head coach at TCU, replacing Billy Tubbs. Because Dougherty's defensive-minded approach clashed with Tubbs' up-tempo, high scoring approach, the team struggled to adjust in his first year, winning just nine games. The next year they improved by three wins, with the season's highlight coming with a nationally-televised 25-point victory over 10th-ranked Louisville, coached by Rick Pitino. In 2004–05, the Horned Frogs finished 21–14, advancing to the quarterfinals of the National Invitational Tournament.

However, after losing star guards Corey Santee and Marcus Shropshire to graduation, the Frogs failed to build on the NIT momentum and stumbled to a 6–25 record in 2005–06. This caused many TCU boosters and local media figures to question whether or not Dougherty was the right person for the job. His 2006–27 team made strides, finishing 13–17, but the season also included an eleven-game losing streak, which did little to quiet Dougherty's critics. Dougherty was fired by TCU on March 16, 2008 after six seasons, only one of which had a winning record. [1]

Dougherty was in Indianapolis working for IHoops, a joint venture between the NBA and NCAA that promotes youth basketball. On July 5, 2011, Dougherty went jogging and never returned. His body was identified on July 8, 2011. [2]

Trent Aubrey Johnson is an American college basketball coach who is currently an assistant coach at California. Johnson had previously been the head coach at Texas Christian University, Louisiana State University, Stanford University, and University of Nevada.

Billy Duane Tubbs is a former men's college basketball coach. The Tulsa, Oklahoma native has been the head coach of his alma mater Lamar University, the University of Oklahoma (1980–1994) and Texas Christian University (1994–2002). His first head coaching job — from 1971-72 through 1972-73 — was at Southwestern University, Georgetown, Texas, where his teams were 12–16 and 19–8. From there he went to the University of North Texas to serve as assistant coach under Gene Robbins and for one year under Bill Blakely.

The TCU Horned Frogs are the athletic teams that represent Texas Christian University. The 18 varsity teams participate in NCAA Division I and in the Football Bowl Subdivision (FBS) for football, competing mostly in the Big 12 Conference. The school was a founding member of the Southwest Conference and was a member of the Western Athletic Conference, Conference USA, and the Mountain West Conference before joining the Big 12. Two TCU teams participate outside the Big 12 in sports not sponsored by that conference. The rifle team competes in the Patriot Rifle Conference, and the beach volleyball team is set to join the Coastal Collegiate Sports Association (CCSA) for the 2018–19 school year.

The Texas A&M Aggies men's basketball team represents Texas A&M University in NCAA Division I college basketball. The Aggies compete in the Southeastern Conference. Since 1998, the teams has played its home games at Reed Arena, a 12,989-capacity arena in College Station, Texas on the campus of Texas A&M University. The Aggies are currently coached by Buzz Williams who was hired on April 3, 2019 prior to the start of the 2019-2020 season.

Eddie Fogler is an American retired college basketball player and coach. He played for the University of North Carolina from 1967 to 1970 where he played as a point guard on two NCAA Final Four teams. Fogler was an All-City guard at Flushing High School in Flushing, New York.

James Patrick Christian is an American college basketball coach who is the head coach of the Boston College men's basketball team. He previously held the same position at Kent State, TCU and Ohio. 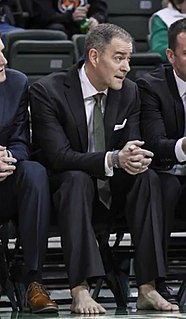 Scott Michael Nagy is an American college basketball coach and the current head coach for Wright State Raiders men's basketball. He had previously served as head coach at South Dakota State for 21 seasons (1995–2016).

The South Carolina Gamecocks men's basketball team represents the University of South Carolina and competes in the Southeastern Conference (SEC). The Gamecocks won Southern Conference titles in 1927, 1933, 1934, and 1945, and then they gained national attention under hall of fame coach Frank McGuire, posting a 205–65 record from 1967–1976, which included the 1970 Atlantic Coast Conference (ACC) championship, the 1971 ACC Tournament title, and four consecutive NCAA tournament appearances from 1971–1974. The program also won the 1997 SEC championship, National Invitation Tournament (NIT) titles in 2005 and 2006, and a share of the 2009 SEC Eastern division title. Most recently, the Gamecocks won the 2017 NCAA East Regional Championship, reaching the Final Four for the first time in school history. Frank Martin is the current head coach, and the team plays at the 18,000-seat Colonial Life Arena.

The TCU Horned Frogs men's basketball team represents Texas Christian University, located in Fort Worth, Texas, in NCAA Division I men's basketball competition. Since 2016, the Horned Frogs have been led by TCU Lettermen's Hall of Fame member, head coach Jamie Dixon. TCU has competed in the Big 12 Conference since 2012, and previously competed in the Mountain West Conference (2005–2012), Conference USA (2001–2005), Western Athletic Conference (1996–2001) and Southwest Conference (1923–1996). The Horned Frogs play their home games on campus at Ed & Rae Schollmaier Arena, formerly known as Daniel–Meyer Coliseum, which reopened in December 2015 after a $72 million renovation.

Tony L. Benford is an American basketball coach who is an assistant coach of the TCU Horned Frogs men's basketball team.

The 2016–17 TCU Horned Frogs men's basketball team represented Texas Christian University in the 2016–17 NCAA Division I men's basketball season, led by head coach Jamie Dixon in his first season at TCU. The Horned Frogs played their home games at Schollmaier Arena in Fort Worth, Texas as members of the Big 12 Conference. They finished the season 24–15, 6–12 in Big 12 play to finish in a tie for seventh place. They defeated Oklahoma and Kansas in the Big 12 Tournament before losing in the semifinals to Iowa State. They received an invitation to the National Invitation Tournament where they defeated Fresno State, Iowa, and Richmond to advance to the semifinals at Madison Square Garden. At MSG, they defeated UCF to advance to the NIT finals where they beat Georgia Tech to become the 2017 NIT champions.

The 2017–18 TCU Horned Frogs men's basketball team represented Texas Christian University in the 2017–18 NCAA Division I men's basketball season, led by head coach Jamie Dixon in his second season at TCU. The Horned Frogs competed as members of the Big 12 Conference and played their home games at Schollmaier Arena in Fort Worth, Texas. They finished the season 21–12, 9–9 in Big 12 play to finish in fifth place. They lost in the quarterfinals of the Big 12 Tournament to Kansas State. They received an at-large bid to the NCAA Tournament, their first appearance in 20 years. Seeded No. 6 in the Midwest region, TCU lost in the first round to Syracuse.

The 2017–18 TCU Horned Frogs women's basketball team represents Texas Christian University in the 2017–18 NCAA Division I women's basketball season. The 2016–17 season was head coach Raegan Pebley's fourth season at TCU. The Horned Frogs were members of the Big 12 Conference and played their home games in Schollmaier Arena. This season TCU got back in the AP Top 25 for the first time since 2010. They finished the season 23–13, 9–9 in Big 12 play to finish in fifth place. They advanced to the semifinals of the Big 12 Women's Tournament where to they lost to Baylor. They received an at-large bid to the Women's National Invitation Tournament where they defeated Lamar, Missouri State, New Mexico in the first, second and third rounds, South Dakota in the quarterfinals before losing to Indiana in the semifinals.