Nelson Pereira dos Santos (22 October 1928 – 21 April 2018) was a Brazilian film director. He directed films such as Vidas Secas (Barren Lives), based on the book with the same name by Brazilian writer Graciliano Ramos.

Pereira dos Santos, named in honor of Almirante Horatio Nelson, was born in São Paulo, Brazil. Himself a frequenter of the cinema, Pereira dos Santos's father brought his very young son to the movie theater for the first time. By secondary school Pereira dos Santos was already fond of literature, and at 15 years old he joined the Brazilian Communist Party and became close to one of its other members, Astrogildo Pereira. At the time the party was considered illegal by the government of Getúlio Vargas.

His most well-known film outside Brazil is Como Era Gostoso o Meu Francês ( How Tasty Was My Little Frenchman , 1971). It was entered into the 21st Berlin International Film Festival. [3] The film takes place in the sixteenth century and details the alleged cannibalistic practices of the (now extinct) indigenous Tupinamba warrior tribe against the French and Portuguese colonizers of the Brazilian littoral. The film is something of a black comedy about European colonialism—one that makes satirical use of the Brazilian modernist trope of Antropofagia ("cultural cannibalism"), then recently revived by the Tropicalismo movement of the 1960s—as well as a bitter commentary on the historical genocide of the indigenous tribes in Latin America and the gradual destruction of their civilization.

His 1994 film The Third Bank of the River was entered into the 44th Berlin International Film Festival. [4]

Pereira dos Santos' 2006 film Brasília 18% explores some of the darker aspects of contemporary Brazilian politics such as political corruption, the murder of trial witnesses, and money laundering.

Pereira dos Santos was a member of the Brazilian Academy of Letters since 2006. [5] 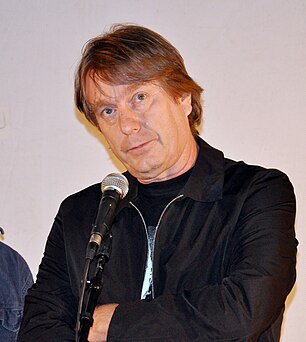 Glauber de Andrade Rocha, better known as Glauber Rocha, was a Brazilian film director, actor and screenwriter. He was one of the most influential moviemakers of Brazilian cinema and a key figure of Cinema Novo. His films Black God, White Devil and Entranced Earth are often considered to be two of the greatest achievements in Brazilian cinematic history, being selected by Abraccine as, respectively, the second and fifth best Brazilian films of all-time. 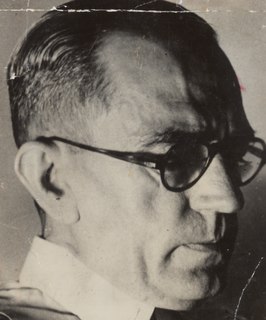 Graciliano Ramos de Oliveira was a Brazilian modernist writer, politician and journalist. He is known worldwide for his portrayal of the precarious situation of the poor inhabitants of the Brazilian sertão in his novel Vidas secas. His characters are complex, nuanced, and tend to have pessimistic world views, from which Ramos deals with topics such as the lust for power, misogyny, and infidelity. His protagonists are mostly lower-class men from northeastern Brazil, which are often aspiring writers, or illiterate country workers, all of which usually have to deal with poverty and complex social relations. 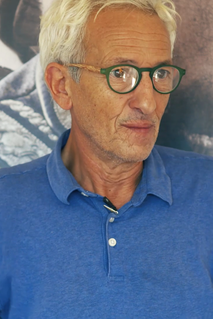 Vidas secas is a 1963 Brazilian drama film directed by Nelson Pereira dos Santos, and based on the 1938 novel of the same name by Graciliano Ramos. It tells the story of a poverty-stricken family in the dry Brazilian northeast.

The Guns is a 1964 Brazilian-Argentine drama film directed by Ruy Guerra.

Ruy Alexandre Guerra Coelho Pereira is a Portuguese-Brazilian film director and screenwriter. Guerra was born a Portuguese citizen in Lourenço Marques in Mozambique, when it was still a Portuguese colony. 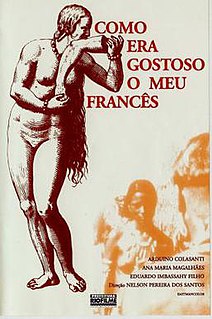 How Tasty Was My Little Frenchman is a Brazilian black comedy directed by Nelson Pereira dos Santos released in 1971.

Humberto Solás was a Cuban film director, credited with directing the film Lucía (1968), which explored the lives of Cuban women during different periods in Cuban history. 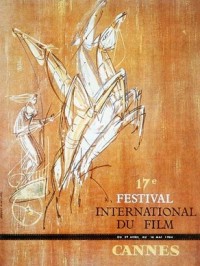 The 17th Cannes Film Festival was held from 29 April to 14 May 1964. On this occasion, the Palme d’Or was renamed "Grand Prix du Festival International du Film", a name that remained in use through 1974, after which it became the Palme d'Or again.

The Alienist is a 1970 Brazilian comedy film directed by Nelson Pereira dos Santos. The film was entered into the 1970 Cannes Film Festival.

Joel Zito Araújo is a Brazilian film director, writer and producer of films and TV programs. Since 1984, Araújo has produced one feature film, two short films and 25 documentaries. Some of these works have won prizes or been selected for screeningd at film festivals throughout the world. From 2006 to 2007, Araújo was president of the Brazilian Filmmakers Association. He received his Ph.D. in Communication Sciences from the Escola de Comunicações e Artes at the University of São Paulo in 1999. He was Postdoctoral Fellow and Visiting Professor in the Departments of Radio, TV, and Film and Anthropology as well as the Center for African & African-American Studies at the University of Texas at Austin from August 2001 to May 2002. 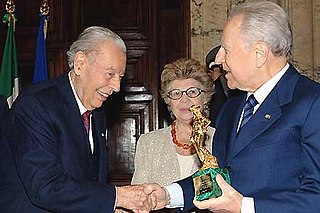 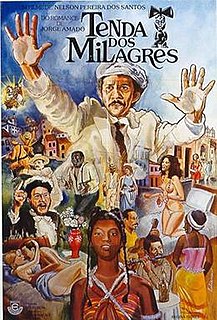 Tenda dos Milagres is a 1977 Brazilian drama film directed by Nelson Pereira dos Santos, based on the novel of the same name by Jorge Amado. Starring Hugo Carvana, Sonia Dias and Severino Dada, it exposes and satirizes racism in Brazilian society—the most notable example being a flashback scene where Brazilians are shown listening with approving interest to Nazi race theories in the late 1930s. Tenda dos Milagres was shot in Salvador, Bahia.

A Queda is a 1976 Brazilian drama film directed by Ruy Guerra and Nelson Xavier. It was entered into the 28th Berlin International Film Festival, where it won the Silver Bear - Special Jury Prize.

The Third Bank of the River is a 1994 Brazilian drama film directed by Nelson Pereira dos Santos. It is based on the short stories "A Menina de Lá", "Os Irmãos Dagobé", "Fatalidade", "Seqüência", and "A Terceira Margem do Rio" by João Guimarães Rosa compiled into the book Primeiras Estórias. It was entered into the 44th Berlin International Film Festival.

The 3rd Moscow International Film Festival was held from 7 to 21 July 1963. The Grand Prix was awarded to the Italian film 8½ directed by Federico Fellini.