Nunkiang, (Chinese :嫩江; pinyin :Nènjiāng) was a province in Northeast China, which was established in 1945. It was c.26,000 sq mi/67,340 km² large and the provincial capital was Qiqihar. The province was abolished in 1950 and incorporated with Heilongjiang province.

Northeast China or Dongbei is a geographical region of China. It also historically corresponds with the term Inner Manchuria in the English language. It consists specifically of the three provinces of Liaoning, Jilin, and Heilongjiang, collectively referred as the Three Northeastern Provinces (东北三省), but broadly also encompasses the eastern part of Inner Mongolia. The region is separated from Far Eastern Russia to the north largely by the Amur, Argun, and Ussuri rivers, from North Korea to the south by the Yalu River and Tumen River, and from the Inner Mongolian Autonomous Region to the west by the Greater Khingan Range. The heartland of the region is the Northeast China Plain. 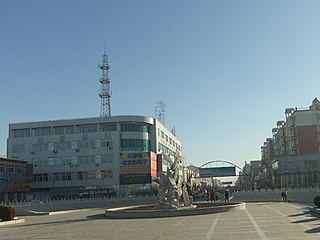 Baicheng is a prefecture-level city in the northwestern part of Jilin province, People's Republic of China, bordering Inner Mongolia to the north and west and Heilongjiang to the east and northeast. At the 2010 census, 2,033,058 people resided within its administrative area of 25,683 km2 (9,916 sq mi).

United Provinces may refer to:

The Resistance at Nenjiang Bridge was a small battle fought between forces of the Chinese National Revolutionary Army against the Imperial Japanese Army and collaborationist forces, after the Mukden Incident during the Invasion of Manchuria in 1931, prior to the start of the Second Sino-Japanese War. It marked the start of the Jiangqiao Campaign.

Northeast Film Studio was one of the first formally established movie production company in the northeast part of China.

Nenjiang Road is the name of a station on Shanghai Metro Line 8. This station began operation on December 29, 2007. It is located at Zhongyuan Road and Nenjiang Road, in Yangpu District. It is also located near an Auchan superstore.

Jiangqiao Mongol Town or Ha-la-erh-ka, is a town on the southwestern (left) bank of the Nen River in Tailai County, western Heilongjiang province, People's Republic of China. It is located 67 kilometres (42 mi) south-southwest of downtown Qiqihar and is served by China National Highway 111. As of 2011, it has one residential community (社区) and 6 villages under its administration.

Rugosuchus is an extinct genus of neosuchian crocodyliform from the late Early Cretaceous of China. It is known from most of a skull, a partial postcranial skeleton, and a second partial skeleton including part of the hips. It was described by Xiao-Chun Wu and colleagues in 2001, with R. nonganensis as the type species. At the time of its description, it was the most complete crocodyliform from northeastern China, and only the second known. 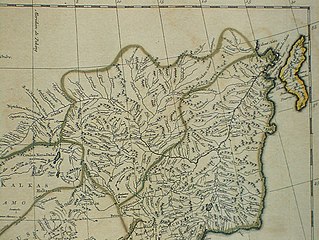 Nenjiang County is a county under the administration of Heihe City in northwestern Heilongjiang province, China. It is located on the river of the same name, which also forms part of the provincial border with Inner Mongolia, more than 200 kilometres (120 mi) southwest of the urban area of Heihe. The county seat is Nenjiang Town. 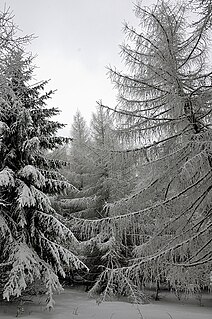 Lesser Khingan is a mountain range in China's Heilongjiang Province and the adjacent parts of Russia's Amur Oblast and Jewish Autonomous Oblast.

Jiagedaqi or Jagdaqi is a district and the seat of Daxing'anling Prefecture, Northeast China. Its physical location is in Inner Mongolia; however, it is under the jurisdiction of Heilongjiang Province.

Paralligator is an extinct genus of neosuchian crocodile that lived during the Late Cretaceous (Maastrichtian) period in what is now the Gobi desert of Mongolia, approximately 71-70 million years ago.

Nenjiang–Greater Khingan Forest railway or Nenlin railway, is a single-track railroad in northeastern China between Nenjiang and the town of Gulian, in Mohe County. It is also known as the Nenjiang–Mohe railway or Nenmo railway (嫩漠铁路). Both of the railway's terminals are located in Heilongjiang Province. In between, the line traverses the Greater Khingan range of Inner Mongolia. Much of the line is located within the jurisdiction of the Greater Khingan Forest District, a special forestry prefecture that covers parts of both Inner Mongolia and Heilongjiang.

Fuyu–Nenjiang railway or Funen railway, is a single-track railroad in northeastern China between Fuyu and Nenjiang in Heilongjiang Province. The line is 179.6 km (112 mi) long and was built between 1930 and 1937 and rebuilt in 1946. Major towns along route include Fuyu, Nehe, and Nenjiang.

Nenjiang is a town in and the seat of Nenjiang County, in northwestern Heilongjiang province, China, bordering Inner Mongolia to the north and west and sitting on the east (left) bank of the Nen River. As of 2011, it has 12 residential communities (社区) and 5 villages under its administration.

Feng Jixin (1915–2005) was a People's Republic of China politician. He was born in Jinzhai County, Anhui Province. A member of the New Fourth Army during the Second Sino-Japanese War, he was sent to Nenjiang Province in 1945. He was governor of Gansu and Communist Party of China Committee Secretary of Gansu.

Mohe railway station, is a railway station located in Xilinji Town, Mohe County, Heilongjiang Province. It is the north end of the Nenjiang–Greater Khingan Forest Railway and the northernmost passenger railway station in China. It is a tourist attraction due to its location, with more than 650,000 annual tourists.

Chen Junsheng was a Chinese politician. As a provincial official in Heilongjiang in the early 1980s, he distinguished himself as an advocate of the household responsibility system, resulting in the implementation of the reform in China's last bastion of collective agriculture. Consequently, he was elevated to the national government and served as Secretary-General of the State Council (1985–1988), State Councillor (1988–1998), and Vice Chairman of the Chinese People's Political Consultative Conference (1998–2002).